In Pain waiting on Diagnosis

I am in pain daily and becoming so discouraged!

The onset of my most notable symptoms began in November '19. Alongside my PCP, we have been in the process of chasing a diagnosis and/or eliminating other diagnoses. In this process of trying to find out the source of my pain, I have had 2 surgeries, and one procedure, so here is the course of the last 2 years: 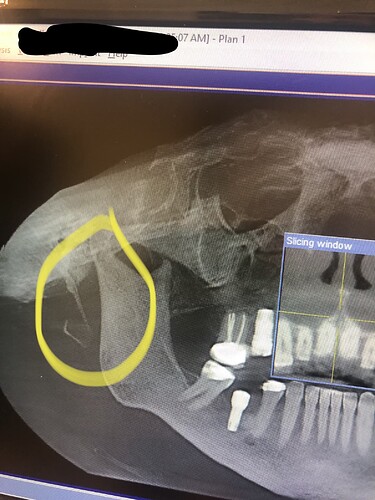 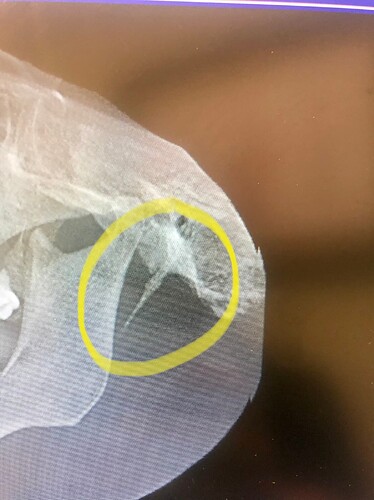 That looks a nasty styloid, it’s not surprising you’re getting symptoms; it looks quite a point on there! We have quite detailed info in the Newbies Guide Section about symptoms & possible explanations, which nerves are potentially irritated by the styloids etc, here’s a link:
ES Information: Common Symptoms And Possible Explanations For Them - Welcome / Newbies Guide to Eagle Syndrome - Living with Eagle
Generally a diagnosis is given if elongated styloids &/or calcified stylo-hyoid ligaments can be seen on an x-ray or CT scan or felt, and the patient has ES symptoms, so you do fit the bill! There aren’t any clear cut diagnostic tests which can be done; some doctors inject lidocaine into the tonsillar area to see if it stops the pain, but this isn’t definite, it doesn’t always confirm ES.
I hope that Dr Lamarre is able to help you, & well done to your friend for spotting the styloids!

YIKES! Both styloids look like ice picks! No wonder you’re having terrible pain. I also hope Dr. Lamarre is informed about ES & very helpful & supportive of your situation. If he’s not, don’t despair, there are doctors on our list who do know about ES & will be supportive though you may need to travel to see one of them.

Please let us know how your appointment goes.

Thank you for the references Jules. I am so very thankful for this forum and the plethora of information and knowledge it provides. I have been reading and reading. I am concerned about finding a physician that is knowledgeable of ES & even more so Vascular ES. Dr. Lamarre is on the Doctor List, but after making my appointments at Cleveland Clinic, I see that any notes made on head and neck surgeons from CC on this list, either do not and/or may not acknowledge Vascular ES. I’m just concerned this could be all together some other issue that’s getting missed.

Thank you Isaiah_40_31. I saw Dr. Lamarre’s name on the list provided under doctor information, so I was hoping that meant he would be familiar with ES. I decided to make appointments at Cleveland Clinic since I have so many issues that I just hope to get answers for that no one else is seeing. I have so many neurological issues that have me concerned and scared. Proverbs 3:5-6 and Jeremiah 29:11. I also need to work at walking and not growing faint!! Thank you for all your support of so many!!

Proverbs 3:5-6 is one of my favorite passages in the Bible but I also love Jeremiah 29:11. Another favorite of mine is Philippians 4:6-7.

ES can cause many nerve related problems & so often our members - myself included are surprised about what symptoms disappear once the styloids are removed. Granted it can take some months after surgery, but the positive health changes we’ve noted have often been quite amazing. I found some other posts about Dr. Lamarre that were very positive so you should be in good hands with him.

I’m so sorry for what you’ve already been through & that ES has added yet another health challenge to your list. I will be praying for a very good meeting with Dr. Lamarre.

It’s a tricky one, many of us have had more than one health condition, & sometimes it’s impossible to determine what’s caused by ES & what else is going on… I appreciate that you want to know before you think about surgery, but often to go for it & see what your left with is the only way! If you have a CT with contrast it can show if blood vessels are compressed, especially if they’re in a position where you get symptoms. There’s info in the Newbies Guide Section about vascular symptoms- do you get dizziness, fainting, head pressure etc?