Hi! I am not diagnosed but I would like to tell my story and have you look at my scan. I have a rare disease called Craniofacial Fibrous Dysplasia in my forehead area. I started having headaches 10 years ago and once the FD was found, I had most of the FD removed. I actually saw a doctor in Boston for FD who I saw on here has helped someone with Eagle Syndrome. About 5 years after the surgery, I started getting pain in my face again but much worse than before. I’ve seen numerous doctors and had multiple treatments, and the closest anyone can say is I have trigeminal neuralgia from the surgery. Every so often I pull out my old scans hoping that maybe this time I’ll see something like a compressed nerve or a screw from my metal plate rubbing the wrong way. Something that will give me a path to being fixed. Well today I noticed these tusks sticking out the bottom of my 3D CT head scan. Down the google rabbit hole I went, and I ended up here. I’m going to see my primary at the end of Sept but I’m wondering if you all see what I see. I just want to know how hard I have to push or if I’m just reaching for straws. Thank you for reading this! 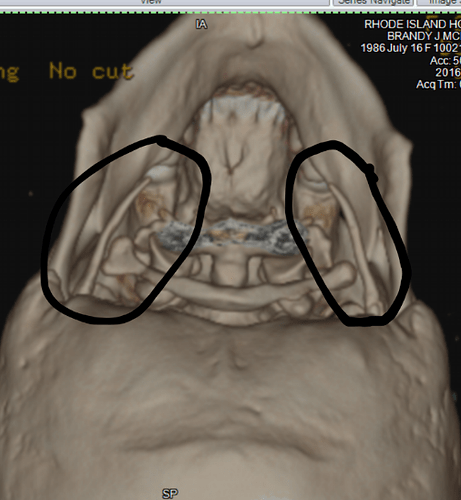 First off, welcome to this forum! I’m sorry to hear that you have Fibrous Dysplasia. It sounds like a difficult problem to deal with.

Though your scan is upside down (styloids usually point toward the ground not the ceiling) they do look very long. You will read over & over again on this forum that we aren’t doctors & can’t diagnose but can give our opinions on CT & other scans that are posted. These are only opinions, however.

Based on the length of your styloids in the scan you posted, I would say Eagle Syndrome is a distinct possibility, & the “tusks” are impinging on cranial nerves & possibly vascular tissues that are creating your current facial pain. Symptoms frequently go away once the elongated styloids or calcified stylohyoid ligaments or both are removed. Surgery for ES, when done by an experienced ES surgeon, is truly life giving. The symptoms of ES often rob those who have it of the ability to live life normally.

There are scientific articles in the Newbies’ Guide (check for the link under the General Discussions tab above) that you can read & print out to take to your primary doctor’s appt at the end of Sept. Dr. Cognetti is a very experienced ES surgeon in Philadelphia, PA. He is possibly the most experienced ES surgeon on the East Coast of the US. You can find his information by using the search tool & putting in Latest Doctor Information. You want to find a surgeon who will remove your styloids to the skull base & also remove the s-h ligaments (even if they aren’t calcified) to help prevent any future problems as regrowth does occur occasionally.

We’re here to answer your questions. There are many knowledgeable people on this forum who have been down the ES road & who can help you understand ES, your symptoms & how to approach reluctant doctors as many don’t believe ES exists (it’s like a mythological beast…).

So glad you reached out!

Yes, I second all that! They do look quite long, so it is a possibility, certainly worth looking in to. Have a read through the common symptoms- sometimes people do that & realise some they’ve had for years & not known it’s ES, like ear pain etc… Just to add for extra info, Ben’s Friends also have a facial pain group with lots of support & info, might be an idea to have a look at their site, maybe there’s medications which can help in the meantime- you haven’t mentioned whether you’ve tried anything for the TN? There’s info in the Newbies Guide section as well about what sort of medications are good for never pain, although I’m sure you’ve probably tried some, but here’s the link to the other group:


It’s worth getting as much info as you can about ES before you see your doctor, as ES is also quite rare, so a lot of doctors don’t know much about it & many are quite dismissive about it, so not always keen to refer! Good luck & let us know how you get on…
atticusnorris August 30, 2018, 11:22am #4

Thank you so much for your responses!! It gives me confidence to approach my primary about it. I’m going to wait till September and not push for an earlier appointment. I think I’ll ask to see my old ENT in Boston, Dr Donald Annino. Reading through the posts, one of the members had surgery with him. As far as the symptoms go, I’ve had some but not all. I think the FD and the surgery complicate things. I’ve tried the following for the TN which have not worked: tegretol, indocin, gabapenten, lyrica, cymbalta, mementine, and a few others. What has worked somewhat is oxycodone and steroid shots. I see a pain management doctor and I go to a headache clinic in Boston. At this point, I would cut my head off if I could. Thank you again!

Most people don’t have the whole spectrum of possible symptoms caused by ES. Some of the most common symptoms - ear & throat pain, feeling like something is stuck in the throat, neck pain, eye pain, pain at the back of the skull are usually experienced by most ES patients. Beyond those, it seems the sky’s the limit as to other symptoms. It all depends on which cranial nerves/vascular tissues are being irritated & how they’re responding to that irritation. That’s one reason ES is so hard to diagnose based on symptoms alone. Too many people have been called hypochondriacs or have been sent off to see psychiatrists because over years their crazy symptoms added up to no particular diagnosis thus were considered psychological. Very sad!!

My daughter was diagnosed with FD when she was 6yrs old, she is now 13. I have the Eagles Syndrome just was diagnosed a year ago.

I’m sorry to hear about your daughter. That must be a hard thing to deal with. I just looked up FD & presume it’s Familial Dysautonomia. I hope over the years you’ve had some good medical advice that helps her to live more comfortably.

I read your story & see you’re suffering from migraines. These are a common side effect of ES & most often stop occurring once the styloid process(es) &/or calcified stylohyoid ligament(s) are removed. They are often considered a vascular symptom which means your carotid artery(ies) &/or jugular vein is/are being compressed by your styloids or ligaments when your head is in certain positions. Having the blood flow cut off contributes to creating migraines. Another option is irritation of your trigeminal nerve which is among the cranial nerves that are often irritated by ES.

I don’t know where you are in the US, but I assume you’ve read posts on this forum & are familiar with the US ES Doctors’ List (use the magnifying glass icon at the top right of this page to search for it) that has been put together to help ES sufferers find surgeons near to them who can do their surgery(ies). Surgery is really the only more surefire way to eliminate your symptoms. Drug therapy is a bandaid, but it does work for some people for many years before surgery becomes necessary.

FD is reference to Fibrous Dysplasia, a rare bone disorder where basicallly the bone turns to mesh as it regrows.
I do fight with migraines and just started Botox. I live in Alabama and unfortunately there are no drs in my area that know anything about ES

Hi Peggie!! Nice to see you over here too. How is A doing? I posted my scan to the FD group too but they didn’t seem too concerned by it. How were you diagnosed with ES? By ct scan? Was it an ENT?

You can privately email Peggiew4 by clicking on her name as it appears above her post. That will take you to a link to start a private email.

Fibrous Dysplasia sounds similar to Familial Dysautonomia in its discription. It’s a difficult problem one way or the other, & I’m sorry your daughter is suffering from it.

Emma, who’s been on this forum for years, recently found a surgeon in Louisiana who’s going to do her ES surgery. When she’s recovered, I’m sure she’ll post info about her experience. If he does a good job, he might be someone you could contact. I know he’s not in your state, but he’s closer to you than many of the other doctors on the ES Doctors List.

Atticusnorris, you may well have ES. I hope you can get more information from your ENT in Boston. It would be great if you could move forward and get relief.

Peggiew4-- I am not sure, but I thought that there was a surgeon at Emory who could operate on Eagles. However, as Isahiah40_31 noted, I just found a skull base doctor in Louisiana. I am scheduled for surgery on Sept 5. I do not know if it will happen because there is a tropical event in the gulf supposedly heading our way. Regardless, if my surgery goes well, I will certainly post his name. Depending on where you live in Alabama, my doctor may be closer than one at Emory.
To you both, I do not have Fibrous Dysplasia but I was born with a misaligned jaw and I believe the constant stress on my nerves from the lack of symmetry is possibly a cause for Eagles. I think my body has reacted this way to inflammation and years of compensating for abnormal structure. I doubt there is any one cause.
In two days, I expect to be down for awhile, but I will be back with an update when I am well enough.

emma, I’ll be praying that your surgery isn’t postponed & that all goes well for you, God Bless!

Hi guys! i just wanted to give a quick update. I met with Dr Annino for about 10 mins. He said that my symptoms don’t match up perfectly but he can see how I might have ES. I’m going for a new CT scan today and then we’re going to take it from there. He’s also going to look at my previous surgery for FD to see if something is irritating my nerves from that. He’s open to trying the surgery for ES on one side to see if it helps. If not, I’ll try my last resort of a peripheral nerve stimulator.

Good that he’s open to Eagles, hope that the CT shows what is the problem, let us know how you get on…

Please remember that if you have bilateral ES & still have symptoms after your first ES surgery, they can be coming from the remaining elongated styloid/calcified ligament. Too many people have turned away from a second surgery because they were still symptomatic after the first one. There is no way to tell which styloid is causing which symptoms until both are removed (in bilateral cases).

Yes, & unfortunately a lot of doctors don’t realise this, & discourage people from having the other side done as ‘the first didn’t work’…