5 hours after surgery with Dr. Cognetti

I had my left styloid removed externally today with Dr. D Cognetti. Yeeh!

5 hours post-surgery and surprisingly feeling great! I know it can be tricky after anesthesia, but so far I don’t have any first bite syndrome, irritated nerves, or inflammation and swollen. Almost no pain, only little on one side when swallow, similar to when have tonsillitis. Actually I felt much worse last year when get removed my impacted wisdom tooth under local anesthesia.

I was more afraid of general anastesia than surgery itself, never had it before. But I got so relaxed and calm in preparation room. Im sure there is not only electrolytes in these dropper bag that they give before surgery

While waking up from anastesia I had a lot of jokes in my head. When my wife and kid came into recovery room, I pretended like I don’t recognize them

Took a couple miles wallk from hospital to train station, had my late night breakfast, now heading back to NYC, have some ice on a side just in case. I know i shouldn’t overdo, but…

Can’t say anything about my ES symptoms yet, it was more vascular, and I don’t wanna test them now.

I’m also surprised that incision was made much smaller and lower on neck than I expected (picture attached). I don’t know how Dr. Cognetti get removed my full left styloid from that far. Looks like some interesting surgical technic, nothing close to what I’ve seen on videos or read descriptions in paper about external approach. I’ll ask doctor about it when have my post-op checkup.
Removed styloid appeared to be shorter than I expected 38mm instead of 55mm that was mesured by radiologist. But looks like it was removed completely (on picture attached I can see base of the styloid), and radiologist overestimated it.

Thank you all for your support. The list of ES doctors made on this forum brought me to a great experienced in ES surgeon! 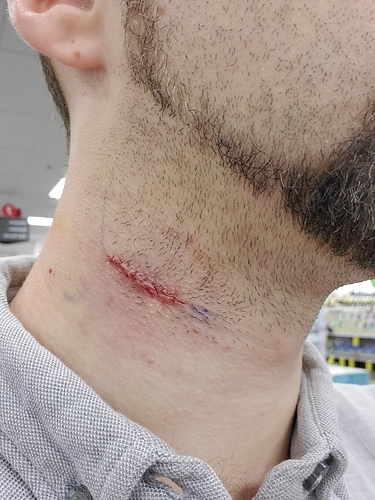 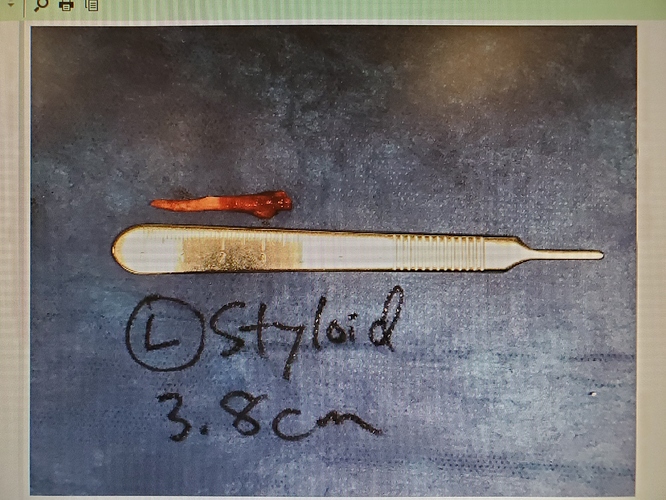 Glad that you’re feeling so good, just be very careful not to overdo it !(she says from past experience!) Your poor family, playing tricks on them like that, but good that you’ve not lost your sense of humour!Maybe they did put someting in your medication

!
It is a very small & low incision, so that’s good! But a good amount out! Hope you keep healing well & keep us updated!

Happy to hear that your surgery went well and that you haven’t lost your sense of humor. Sending prayers that you continue to do well

So glad it went so well! I’m a week out from surgery and my swelling and pain peaked around day 5/6. Maybe you won’t experience this but it’s normal if you do

PS - Dr. Cognetti doesn’t put a bandage over it? My instructions said don’t remove dressing for 48 hours. Just curious what different docs do.

Great report! Be wise to the “honeymoon” period

Please rest as much as possible - lean on your family, so grateful to hear you have them! Sending you a smooth journey home, be well.

Thank you for the update. Here’s some food for thought which may be helpful: Anesthesia & the anti-inflammatory meds used during surgery can stay in your body for several days post op giving a sort of false sense of well-being or a “honeymoon” period as JustBreathe noted. It’s important for you to follow the pain medicine regimen prescribed by your doctor & ice, ice, ice…for at least the first few days. It has been noted by both forum members & ES surgeons that days 4-6 post op tend to be when swelling & pain are the worst. First bite syndrome often doesn’t start immediately & many people don’t get it at all. Hopefully that will be your situation.

You incision looks amazing! You had quite a trip to take getting home so soon after your surgery, but I’m glad you’re able to rest & recover at home. The trick you played on your wife & child was a good one! I hope they laughed! Great picture of your styloid process as well. Wish I could have gotten a similar one of mine.

Please keep us updated as to your healing progress. I do hope you heal quickly & as painlessly as possible.

Hi MrNikolay!
It sounds like you had a good experience. I am one week away from my surgery with Dr. C. I have been a bit apprehensive lately so I am happy to hear that you are doing well. I hope you have continued success in your healing.
Best,
BG

Feeling great! Still in “honeymoon” period probably. Didn’t get any worsen since beginning.
The rest the pain when swallowing or coughing disappeared after night 2. Also no more pain when moving head around or standing up from bed.
My boss called my after surgery and for a joke told that they want to see me this Monday in the office at work. Now i feel like it might be even possible

After two days just realized that a small area of my chin on left side have less touch sensation than another. Not bother at all, and I assume it will get better with time.

I don’t understand how, but the area where styloid was removed and surroundings - behind the jaw, below mastoid and at tonsil fossa, - have absolutely no pain, discomfort or any other signs of surgical manipulations. If I didn’t see actually removed styloid after surgery, I would not believe it was really removed

Have a little pain under the incision and larynx when touching it, feels like a bruise.

Another interesting effect - I’ve got some mussels pain on another side of neck and mastoid, that probably have something to do with my right styloid and/or created disbalance. I’m aware of that removing styloid on one side can make ES simphtomatic another side. Also It may be just because of my new wedge pillow, that is super uncomfortable to sleep on.

I didn’t use any painkillers after surgery yet. I have prescribed 6 tablets of strong narcotic painkiller - Hydrocodone, but didn’t have a chance to try it.
I keep my normal day schedule with basic home duties and ~ 1 hour walk outside. Just in case I sleep on wedge pillow at 30 degree (super uncomfortable) and have ice on incision and below area for about 2-3 hours per day.

Not bad! 3 days after, no painkillers and you’re walking outside! win.

Yes, I was surprised too. They didn’t put any bandage over incision. When woke up from anesthesia I only have pack of ice on it. Nurse said that I have to keep it from shower for 24h and have Bacitracin Zinc ointment over it twice a day for some period.

That is truly amazing! I hope you continue to feel this good as the days progress! Sounds like this surgery was just what you needed & your body is responding well to everything. It happens that way for some people so you are very fortunate!

Yes, you are right. The second styloid often starts causing worse symptoms once the first side is removed. Some people don’t have bad enough symptoms to have a second surgery but others do. You’ll have to make that decision as time passes. I believe Dr. Cognetti requires at least 3 months between surgeries so you have time to heal and think about it.

I totally agree about the wedge pillow. Sleeping at a 30º angle is like sleeping sitting up. Not a great position! I do recommend you use it for at least the first week, although you can try sleeping on 2 or 3 bed pillows to see if that is better. It will provide some elevation but not so extreme as the wedge pillow & might be enough for you.

How interesting. Is there a line of “glue” type stuff? Mine is starting to peel off just now at almost 2 weeks. Last surgery, I wore these silicon patches I found at Walmart after week 3. It’s now been 4 months for that first side and it’s looking really flat and less red than it was. It’s called Scar Away. I wouldn’t use it too soon though. It sticks to the skin pretty good when peeling it off!

You left the same day or were you there in the Hospital longer? What were you told you had before diagnosis of Eagle Syndrome what labels did Doctors give you prior? I am Allergic to Morphine. Wish you wellness soon

In my case at Emory Hospital in Atlanta, it’s a day surgery - we started at 8:30 a.m. and I was in the car at 11:30 a.m. Pretty remarkable actually if you think about it. I was brushed off like most people before actually having my CT scan show calcification. One doctor thought it was reflux. One said I should just ignore it. To my knowledge, morphine was not used in my anesthesia and it’s not what I took for pain relief afterwards.

thanks, SewMomma, overall now how do you feel after all you went through have you fully recovered all functioning ever Normal exercising or still daily issues?

Hi, 2 months was my turning point last time in terms of feeling like myself again. I’m at 2 weeks tomorrow and I still have slight stinging at the incision and no way you would call my neck normal with the amount of swelling I still have. I had it last time though and that side is looking beautiful now.

thanks, best wishes I hope you get to 100% Normal soon from this F’er LOL or should i have said F’ers heee

In the US it’s common to have ES surgery “outpatient” meaning we go home the same day. If there are complications or the medical insurance requires a hospital stay then a person will stay 1 night in the hospital. In the UK, it seems that an overnight stay in the hospital is part of ES surgery. Different country, different system.

Generally it takes 1-2 months post op to start feeling pretty normal again & to have the swelling go down & symptoms mostly gone. Sometimes symptoms & nerve irritation take up to a year to disappear.