I need help and advice from others please! I had a second tonsillectomy in October of 2015 (they grew back very weird after the first tonsillectomy) and I also had a deep abscess drained by my right tonsil. Since my surgery I have not felt the same. All of my symptoms have been on my right side. The feeling of a foreign object in my throat, ear pain, pain behind my ear, pain at the base of the right side of my tongue, headaches near my right ear, and it feels like a muscle or ligament is stretched from behind my right ear to my hyoid bone. I have gone into my ENT at least 20 times since my surgery complaining of these symptoms. I was put on medicine for GERD, allergy testing and started allergy drops, and always turned away. After doing my own research on my symptoms I found this page and thought maybe I found a reason for my symptoms. I went back to my dr and asked for a cat scan without contrast, but now reading other threads maybe I should have asked for one with contrast? My dr said my styloids don’t look elongated, neither does my hyoid bone and he said my ligament doesn’t look calcified. He said he wasn’t 100% that it wasn’t Eagles, but he thinks I have glossopharyngeal neuralgia and wants me to see a neurologist. I’m still determined it could be caused from Eagles syndrome. Should I ask the neurologist to send me for a CT scan with contrast to see if my ligament is compressing anything? I just want to figure out what’s going on! Also, can I turn my regular ct scan into a 3D scan?

Your CT can be turned into a 3-D image without taking a new one it sounds like eagles to me .many of us here were told we didn’t have it because the doctor did not know to look at the CT in the right image good luck.

Do you have any recommendations on what I could say to the dr, should I try to turn it into 3D and have them look at it again? Can they see if any blood vessels or nerves are compressed when there is no contrast? Thanks!

I have all the symptoms you have and I have Eagle Syndrome. I think the best think you can do is to see a neurologist. And if you need take another 3D cat scan.

Thanks Vanessa for the response, I will make a neurologist appt tomorrow. Are your styloids elongated or is your ligament calcified? I’m glad I’m not alone, I feel like no one was believing me. My dr didn’t measure my styloids he was going through my cat scan with me and just said they look about right. I was confused as to what I was even looking at. My husband is helping me turn my images to 3D, but I’m wondering if it would just be better to get one done with contrast to see if anything is compressed. I’ll ask the neurologist.

It sounds questionable that your doctor didn’t measure the styloids and then can just say they look about right. You could ask to have the ct scan read again by the radiologist and have them evaluate for elongated styloids.

Most people that I’m aware of didn’t need a 3D scan to get evaluated for eagles but they’re good to have for additional information I would guess. But the doctors I went to either wanted a regular ct scan or a ct scan with contrast. The two main Eagles doctors (Cognetti and Samji) both wanted a ct scan with contrast when I saw them, but we’ve heard recently that now Dr Samji wants a “styloid protocol” evaluation from a ct scan without contrast. So I think you could just need a radiologist’s evaluation for styloids with what you have now.

In my own experience, neurologists were no help at all. If your ENT won’t have the ct scan re-evaluated, then if it was me, I would get a copy of the scan on disc and go to other ENTs until you find one that will help.

I thought the same thing, I don’t understand how he knew whether or not they were elongated if they weren’t measured. Or if it’s the angle/thickness of my styloids. He just seemed in a hurry to get to the next patient and wanted me to go to a neurologist. I will call and see if the radiologist will look at my scans again and measure the styloids. There is a doctor in Houston who I have seen once before that I found on the list of doctors from this site, maybe I’ll go see him before the neurologist. I just want to figure out what’s going on with me!

I think your plan sounds good. Please keep us posted on how it’s going. Sometimes getting through all this stuff to get a diagnosis can be the hardest and most frustrating part. 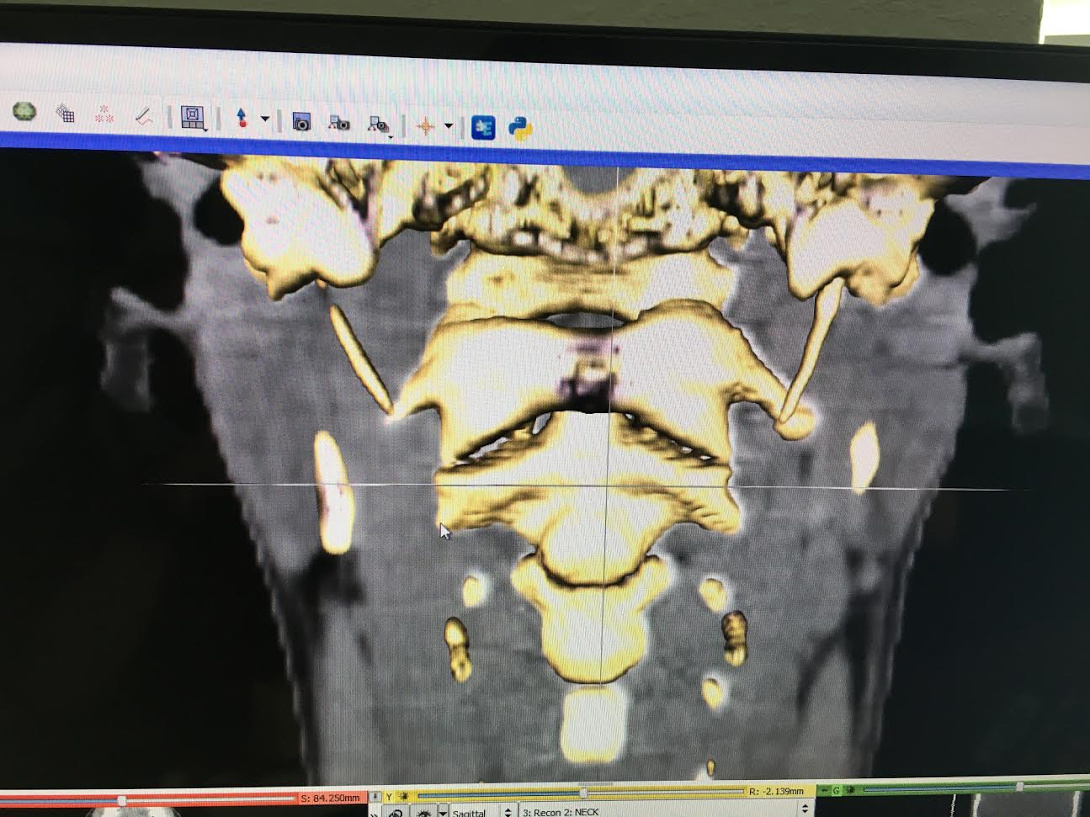 My husband turned my cat scan into 3D and we measured my styloids and they seem the be less than 3cm, but my right styloid looks like there is gap? I am waiting for my dr office to call me back, but wanted opinions. I feel silly calling and asking my dr if its abnormal since they already read the scan, wouldn’t they have seen that? Can it just look that way in the scan or is it really seperated, i’ve never looked at styloids before so I don’t know if its normal. The side that looks like the styloid is detached is the side that I have all the pain. I called the imaging center where I got my cat scan and they won’t look at it again until my dr orders it.

I’m not a good person to talk about the technical stuff, but those look pretty scary. From what I understand, it can look like gaps because some areas are less calcified and don’t show up on the scan.

Try looking back in some past discussions where people have posted their scans.

Hopefully some other people can join in here to comment who know more about this. I think you could benefit from going to a doctor who knows about Eagles because those sure look like they could be causing you some issues.

I don’t think they necessarily would have seen those on your regular ct scan if they weren’t told to evaluate for styloids. They don’t look for them normally and they didn’t see this 3D image.

Sometimes the elongated styloids can form in jointed ways, so it might be that, or as heidemt says, some areas more calcified than others. The size of the gap between elongated styloids and the processes of the vertebrae can also be significant- there have been quite a few members who have had structures compressed between the styloids and processes, so that needs to be looked into as well. You can see from the angle, but you can definitely see both sides reach the vertebra processes, and (in my non-expert opinion) I think that it means they are longer than average. So it would definitely be worth trying to get them evaluated again, and see if you can get in touch with one of the doctors more familiar with ES. Good luck!

One other thought I wanted to mention. People can be symptomatic from styloids that are not super long. Eagles in the past was considered to be anything over 3 cm because that’s what the average styloid was. But average by definition means that some people have longer and some people have shorter styloids. So someone with a naturally shorter styloid could be having issues if their’s has become elongated to 3 cm or so. We were told that Dr. Samji (one of the main Eagles doctors) now considers anything 2.5 cm and longer (with symptoms) to be Eagles. I had lots of pain from a 2 cm piece of styloid. Even if your styloids are around 3 cm, they could still be causing you significant pain.

That’s a good point I didn’t even think of that. I am going to get the length of styloids on my report and send everything to dr samji for his opinion as well as see what my dr thinks. Thank you!

In my opinion you’d be wasting your time trying to convince your dr to re-evaluate you. Find a dr experienced in Eagle’s Syndrome, go armed with your CT and as many threads from this support group that back up your symptoms. This is a very misunderstood diagnosis so you really need an expert’s opinion. Be your own advocate. Most of us on this site were made to feel like we were crazy during our search for answers.
Best of luck to you.

I agree, my dr was making me feel like I was crazy the last few months, I was the one who had to demand a cat scan. I talked to him on the phone the other day and he said he really wasn’t sure about the gap in my right styloid and he wants me to see a skull base surgeon and neurologist. My cat scan is being re-read to include info about my styloids and hopefully it will be ready by Tuesday. Once I get it I can send it to Dr. Samji and get his opinion! Thank you for the advice!

Hi Crystald, I hope you’re well. I’m a new member of the ES and have been suffering from the same symptoms you descriced in your post last year.

I have recently been diagnosed with ES and have GN symptoms too. I wanted to see if you found a specialist to Theo you and whether you did undergo surgery or other treatment options. I truly hope you’re well and look forward to hearing from you.

Hi Vicky! I have not been diagnosed with Eagles Syndrome. I saw a neurologist who thinks it’s nerve damage from my tonsillectomy. He is guessing because I did not have an MRI because my insurance would not cover it. I still have the symptoms I was having, although they seem not as bad. I feel like my symptoms go away sometimes and I think maybe I’m healing and then something triggers it and it comes back again. I am going back to my ENT in September to talk with him about this. I’m frustrated that I still have all of these symptoms, he thinks I have glossopharyngeal neuralgia.

My son’s looked like there was a gap too, but it is just the scan. They are connected to the skull base. my son’s were less than 3cm but still caused GPN. And neurologists never helped other than with ideas for medication. I second the motion that you need an ENT with experience with ES. I documented my son’s case including pictures, CTs and surgical (in case it can help you in some way):https://store.bookbaby.com/book/Connecting-the-Dots2 (and there is a bibliography with hyperlinks to all my research in the appendix)