Has anyone had to have a repeat surgery?

I have a collection of symptoms that seem to be related to Eagle Syndrome, specifically the vascular type. Initially I had surgery with a local ENT who had never before treated ES. He did an external procedure to shorten the styloid.

The problem was that my symptoms are primarily vascular, as if there is compression or irritation of the carotid sinus and jugular vein, among other anatomic structures in my neck. These did not improve after surgery, in fact they may have gotten worse. I feel swelling behind my jaw, around my tongue and in my sinus area.

In fact many symptoms seem like what people describe a carotid dissection to be. I have horrible headaches and swelling in my head, a pulsating throbbing sensation behind my jaw. My vision is impaired at times, and my arms become heavy and weak. I have lost my sense of taste and smell.

All of this gets worse upon turning my neck only slightly in any direction. I do feel like there is a foreign body in my throat around my hyoid and around my tonsil area.

Complicating matters is another doctor I have seen believes I have Thoracic Outlet compression in my chest area which could be causing some vascular compression of the subclavian vein. But most believe that my head and neck symptoms are unlikely to be caused my this and are a separate issue.

So my question is, have any of you had a procedure to shorten the styloid process, only to have to repeat the procedure because they didn't remove enough of the bone?

If the styloid or stylo hyoid ligament are causing compression or irritation to the carotid sinus or other vascular structures in my face, then I would only see relief if the bone is completely removed from the artery or structures being impinged upon.

Right now, both my styloid processes are around 2.6cm but there is some calcification of the ligament at the attachment to the hyoid bone.

Basically every doctor I have seen (and I have seen a few with actual experience with Eagle Syndrome, however limited) have said that styloid processes of the length they are currently (after the first procedure) are very unlikely to cause any issues and they don't want to do any more surgery.

None of them seem to notice or care about the calcification at the attachment to the hyoid. I have read plenty about Styloids of a "normal" length that have caused significant problems. And I have read about syndromes similar to Eagles where the hyoid bone or calcified attachment of the ligament cause problems.

It might not be precisely Eagle syndrome. But it is the vascular symptoms that I am concerned with. Somewhere between the upper cervical vertebrae, the styloid process and the hyoid bone there is, or was, structures which have caused significant pain and compression of the carotid sinus, or other structures in my neck.

I don't know what to do or who to seek out to help me. Maybe an Eagle Syndrome "expert" is not the right approach. I know there are risks to a second surgery but when you have the sort of cerebral vascular symptoms, possibly related to compression, then you have to do something about them!

I live in California, by the way. And I cannot travel across the country at this time. I'm just looking for any similar experiences with vascular symptoms not being fixed with one surgery. Or another approach to getting help rather than going from one medical hospital ENT department to the next.

Thanks. I hope someone here can help me in some way!

I've had 4 surgeries. Two initial ones where they didn't take enough of the styloid out and then 2 revision surgeries. I went to Dr Samji in San Jose CA for my revisions and I would strongly suggest you go see him. He could answer your questions. He did a good job with my revisions and was willing to operate on me when other doctors weren't.

Hi I'm Shawn; Yes I've had 4 surgeries-Heidemt and I are in a race for the 5th. Correct you up there? My story is one of woe and malpracticy procedures. But a happy ending.

My first was in 1990 for right ES. Had all the vascular symptoms and the doctor cut it back to about 1-2 cm to clear all the nerves and tissue in was hitting. He removed about 3.5cm. I woke up with all my symptoms gone.

In 1996 began getting symptoms on left side.

In 2002 the 1990 doctor removed hyoid bone by mistake. He never copped to his screwing me over. He always claimed he removed 3.5cm of styloid blind and a liar.

In 2003 another doctor removed about 3.5 cm which was just the portion hanging out in empty space not touching anything. I got some relief but that was due to the tip not being pushed back as much as it was. They found out the shortened bone was still long enough to be pushing my carotid artery causing carotdynia and nek pain and eustation tube pinching causing ear pain--etc. etc. etc.

It took me 11 years to find a doctor who I thought would do a proper job but was living in agony with all the ear pain pressure etc. He was skilled in skull base surgery and 4 months ago removed 3cm (see!!!!!) to where it is shorter than the right and cut way back. 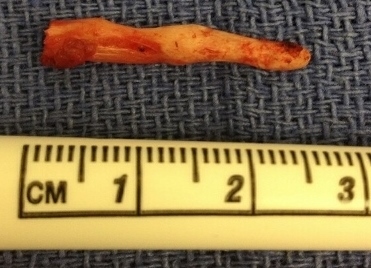 I have a lot of relief but he feels this scraping of my nerves went on so long the discomfort now may be permanent. But as the scar tissue softens I feel better ongoing.

You need to make sure any doctor knows to cut it back as far as they possibly can as it useless now anyway.

You do not need to experience the medical equivalent of measure once cut twice!

It no longer serves the purpose it was designed for-the ligaments are calcified too, probably. They need to show you they understand how long this this supposed to be and also that when healthy it is cartilage not hardening bone so the length is a usless measure it needs to clear the back of the ear and be resected up towards your skull. I can put my finger where is was and move my finger back up and feel nothing. Too short is just fine.

Where in CA-My Dr./savior is at Cedars in Beverly Hills and definitely does more than nose jobs. That was the problem ENT's and head and neck surgeons here don't know how to do real unelected surgery.

Plus you need a SURGEON not a neurologist or any of the other drs I went to. I'm not even sure if they have to be a head and neck surgeon just a surgeon. And train them.

I actually agree with the TOS doc; I have these symptoms, and those pressure ones (pulsing and headaches) appear to still be around after a full styloid removal. I can get them to lessen with some pretty intensive and specific muscle work in the thoracic area (its time consuming and high maintenance…I have to keep on it). I specifically think the head/neck symptoms are more likely TOS (at least in my case). I am also a vascular case, do have some improvement in other areas after surgery (lack of dizziness seems to be the big one), but the head/neck pressure/pulsing appears to still be around. I am not 100% sure since I am only a few weeks out of surgery, and I do still have post surgery muscle tightening always trying to kick in, and swelling still coming down there back in the jaw area.

When I'm more sure of things, I'll post, but I'm still on and off on what has improved and what hasn't….it isn't really clear yet.

Hi I'm Shawn; Yes I've had 4 surgeries-Heidemt and I are in a race for the 5th.

Haha, well, if we're talking neck surgeries, I may be ahead. I had a disc replaced in my neck and a parathyroid tumor removed too.