Greetings to everyone here,

I'd like to start by saying thank you to everyone who has contributed to this board and commented because I have learned a lot reading over everything posted here and it made me feel like I wasn't alone suffering from something that is incredibly painful and that no one seems to believe exists.

I started having pain in my neck almost two years ago. I would have pain on rotation, pain whenever I tried to exercise, headaches, and muscle spasms and tension that would lead to my entire neck, shoulders and upper back spasm-ing and locking up or just random intense bursts of pain. I assumed that having an active lifestyle and a high stress job I was just feeling muscle tension from exercise and job stress and that my neck, shoulders and upper back were responding to that stress. So I did what was logical at the time to me.

I started seeing a General Practitioner for muscle relaxants to help treat the pain, and a Physical Therapist for exercises, stretches, and treatment and although these did offer some relief in was short lasting and never completely relieved the problem.

In addition I also started going to an acupuncturist, a chiropractor, and a masseuse outside of my healthcare system. The chiropractor didn't seem to have much effect, the masseuse seemed to help but only for a very short period of time and the Acupuncturist seemed to have the greatest effect but even that would only last for 48-72 hours before the symptoms returned.

Eventually frustated with the lack of results, I spoke with my GP and she sent me in for a mid-back MRI. Nothing unusual showed up on that so she then referred me to a Pain Management Specialist but that specialist required a X-ray of the cervical spine. The radiologist report states "Elongated styloid process. In appropriate clinical setting this may be seen with Eagle syndrome."

When my GP saw this she said she didn't know much about Eagle Syndrome other than it being very rare and it's unlikely I had it except she had one other patient who possibly had it and it turned out they hindded had it so it should be investigated.

This lead me to this terrific forum which has provided a great deal of information and been of a great help to me. By reading on this forum I realized that a lot of things I hadn't realized were related to my neck pain, i.e. incredible explosive pain on yawning, a feeling of what I originally thought was muscle tension in my neck but really is a foreign body sensation, pain in my rear of my jaw etc. were all realted to the same problem. I should say that my pain at this point is nearly debilitating and effects me everyday. I haven't been able to exercise for more than a year, It seems like long car and airplane flights rides make it incredibly inflamed and i am required to travel an incredible amount for my job.

I took these results plus the actual scan to an ENT Dr. last week and had a long appointment with him. He was an outstanding and compassionate Dr. and spent a lot of time with me but in the end he didn't believe I had Eagles because I had never felt a poking in my throat/difficulty and pain on swallowing from my styloid process. He said he had probably seen less than ten patients in his career with related symptoms but that only two of them he had operated on because the others he wasn't convinced were actually Eagles. He said that he thought that Eagles couldn't be the cause of all the neck/shoulder/upper back pain/tension/spasms that I have experienced and that he would need me to pursue every other possible approach before he would consider it as Eagles. I said I totally understood his position but there was a recognized specialist in Eagles, Dr. Cognetti and I was going to get a second opinion from him.

In the end though he did a physical examination in which he couldn't feel my styloid process in the back of my throat but then did a lidocaine injection as a test. Within an hour all pain and symptoms on my left hand side (which had always been the far worse side) were completely gone! Unfortunately my right hand side was actually the worst it has ever been for the next day or two. For the first time ever I had pain on swallowing and the foreign object feeling on that side. Sadly by the next afternoon the effects of the shot on my left side had completely worn off and I was back to my normal level of pain. The right side remained inflamed/bothered for an additional 24 hours but by eventually those symptoms subsised.

Now I am in the process of sending my CT scan and prints of the radiologists remarks to Dr. Cognetti to see what he says and if he thinks surgery is an option to remove my styloids. I am SURE that this point they are the cause for all my problems and that removal of the left would do wonders for my quality of life.

I do have a few questions at this point. Other than my CT scan CD and print outs of my two radiologists reports I don’t have much other actual documentation does anyone who has been to Dr. Cognetti know what he might specifically like so I can start working on it now?

Also it sounds like the general process for those who have to travel to Philadelphia for surgery has generally been, then submit their information, Dr. Cognetti looks it over and then calls them to discuss their results and what he see as the best course of action. For those that he does surgery on if they are out of town do they need to do an in-person appointment before the surgery? I’m just curious what my process might be since I will have to travel to him for any appointments and the surgery.

Thanks a bunch for the help and I look forward to any responses.

I'm at the same stage you are - trying to get a valid diagnosis and finding a doctor to treat it. My pain is not as severe as yours and I feel for you. I have an appoint with a doctor who does prolotherapy in about two weeks. I don't know if he is familiar with this syndrome. I will post what I find out.

Good luck in your quest. Maybe together we can all get some relief.

My doctor removed my hyoid bone by mistake. needed to go north but went south. The hyoid never was a problem until he tore it out of my head. idiot always swore he removed 2.5 cm of styloid process in the face of doctors reports that said styloid was the same as pre surgical but the hyoid "appeared to be gone. Like I "appear" to be standing in front of you.

I do not know how other parts are affected but removing the styloid process is the best start and see what symptoms remain. When done correctly, my symptoms disappeared. For something rare, that they are unfamiliar with, doctors sure do come up with weird alternatives

Sounds like you have a great second opinion with Dr Cognetti. I had debilitating pain from head to lower chest. I could not do anything without in miserable pain with horrible migraines. I was misdiagnosed with thoracic outlet syndrome back in 2008. Last fall finally diagnosed with Eagle’s syndrome. Nobody in my area wanted to confirm it was Eagle’s syndrome, so I had to fly out of state. It made me feel local docs just didn’t want to upset any of the colleagues that treated me in the past.
I had both sides done by Dr Samji. My symptoms and pain from head to chest have slowly subsided. I believe Dr Samji will review images mailed to him. Just in case, you decide to have a 3rd opinion. Don’t give up and stay on your ES journey!! You know your body and your symptoms best!

I just want to say how grateful I am to have this group. My struggle has been so similar to all of yours. I was finally diagnosed 2 weeks ago and will meet with the ENT surgeon next week. I will keep you posted on my progress. Thanks for listening!

We have a 3D CT scan of my son and it shows the bones but no blood vessels can be seen. So to answer your question, it should show the styloid process and any elongation from calcification, and potentially styloid ligament ossification but it won't show compression of a vessel. I would post a picture of the 3DCT, but I haven't figured out how to get a picture off the disk yet. Working on it...

If you call Dr. Cognetti's office and ask your questions, I am sure they will answer them. You will not be his first out of town patient. We are going to see him but not until the end of the month (June). All I have to bring him is our 2D and 3D CT scans of the neck. If he asks for anything else, I will post it, but I think that is all he needs. 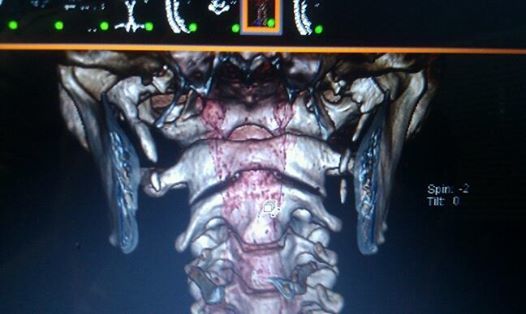 here is how a 3d ct scan looks if you were wondering (sorry to keep posting this everywhere, seems to be helpful)