So I have lurked on here for a while. I have had my CT with contrast. I know the tech because I work with her at the hospital. She showed me my scan on the sly. She said don’t tell anyone! She also did my mammo and I said I won’t tell anyone you showed me my fangs if you swear not to tell anyone you saw my boobs!!??? Hahaha. It’s a deal! So I have some serious fangs goin’ on. I knew it. Don’t really have a lot of symptoms or else I never thought it was ES. Never heard of it. I can say that my throat always feels tight but I had thyroid cancer so I figured the tightness is from that surgery. I will try to attach my ct pic here. 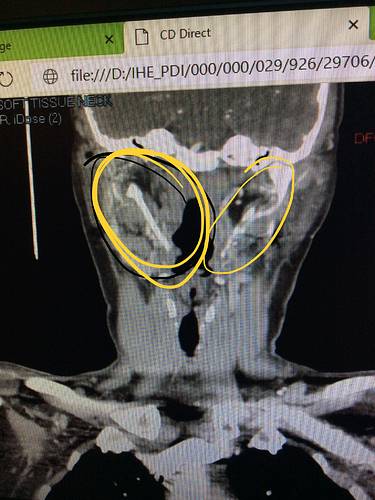 So a while back I came across this little pic of a symbol the Native Americans use to represent an Eagle. I saved it. I have no idea why. ??? Now I know!! I am going to have this tattooed on my wrist. Maybe we all should get tiny eagle wrist tattoos. We will know each other if we ever cross paths. Ha. 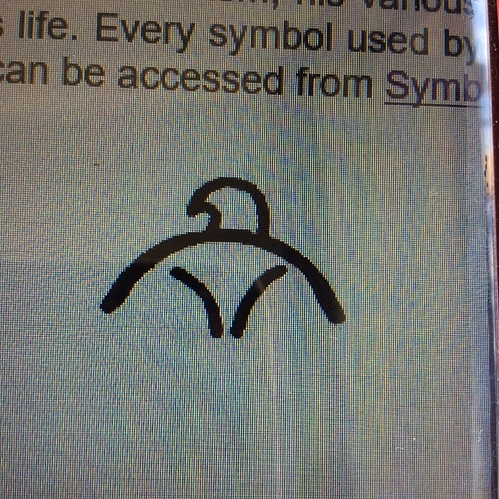 Nice fangs or tusks whichever way you want to look at them! I love the eagle symbol you saved. It’s body kind of looks like styloids, eh?! It could be our secret ID!! You have a great sense of humor! It will take you far toward recovery from ES.

Unfortunately, surgery is the only permanent cure for ES because it’s removing the bones which are poking & prodding the cranial nerves & potentially some of the vascular tissues in that area of the neck which allows the nerves/vascular tissues to heal & thus the symptoms to subside. We do have members whose symptoms aren’t bad enough for them to elect to have surgery & some of them are taking nerve pain meds to help ease the symptoms. Others have tried ultrasound guided injections of lidocaine w/ cortisone which helps numb pain & reduce inflammation but is unpredictable as to how long it helps. The shots can only be repeated a few times so aren’t a long-term solution to relief from symptoms.

Our recommendation is to live with the symptoms until they become “life altering” i.e. you can no longer enjoy your life, function at your job, be a part of your family, etc. When ES effects you to that extent then it’s time to move forward & consider surgery. Dr. Cognetti & Dr. Newman are in your state & are among our more experienced ES surgeons. When the time comes that you want to pursue further treatment, Drs. C or N would be good places to start unless you have someone nearer to you with whom you feel confident in providing your care.

Please keep us posted as to what you decide & don’t hesitate to ask any questions you have. We’re here for you!

They are certainly long & very angled…second what Isaiah has said about treatment & symptoms! Like the eagle too!

Best of luck with your diagnosis. I like the eagle too! I’m still on the hunt for a tattoo. It would be cool to have a universal one for those of us wanting one. It almost seems that once my second styloid is removed, I will lose a small part of my identity. Eagle free, what a novelty!

So I got my CT results. Seems the radiologist didn’t even acknowledge my ES! It mentions a small bit of TMJ on my right side…some degeneration in my neck…? I was seriously annoyed that my fangs weren’t even mentioned! The instructions for the scan were to evaluate for elongated styloid processes, or Eagle Syndrome and TMJ. Okay? I work at the hospital so I saw the director of radiology and I stopped him. I explained about my scan not being read for ES. He said he would take care of it. Yesterday he sent his findings to my doctor. Surprise! I have bilateral ES with ligament calcification. I asked if the report measured my fangs and she said she didn’t know…this was the person who calls with results. I told her that my husband and I have a bet riding on this! Ha. She said she will find out and call me back. Turns out they were not measured. So I have confirmation of my fangdom.

I am hoping I can have a telemedicine visit with the doc in Philly. See what he says. I forget his name. You know who I mean. I wanted to know how close these fangs are to nerves…throat…jugular…etc. Don’t they tell you that??? I want to know my options here. I only have mild issues but I don’t want to be a ticking time bomb.

Unfortunately, it seems the medical errors seem to be getting worse. I have a few doozies in my life that have taught me to have a loud voice and advocate for myself. I had a very serious medical condition re: shown in blood tests results that were just stuck in my medical file and never followed up on. Six months later, I called and asked what the results showed. Well the doc got pretty quiet and just said its good you called. Geez, I get every medical record/consult report, scan on disk and lab result immediately. Medical professionals are far too busy and do not pay attention. we need to keep them on task. So glad you got the right answer. welcome to fangdom!
My serious pain started in 2015 on one side. I then had some pain flairs about once a year without any diagnosis. Then it switched to the otherside. The pain started to increase in about early 2019 and I was trying everything injections, dry needling, nerve blocks before the pain became excruiating in Dec 2019 when I finally got the eagles diagnosis. Surgery was end of April. Im procrastinating about the other side now because Im not in much pain however my left side which was done, was in alot of pain. I had major flairs in jaw and ear after surgery. Looking back, I wish I had done more to get those areas calmed down before surgery as the post op might have gone better. I am scheduling other side in a few months. Im hoping post-op will have less jaw/ear issues because Im doing it while it is out of control symptoms.
Data shows this will worsen as we age. Im getting alot of stuff done before I get too old or at higher risk going under anesthesia. I want to age well and not be in pain.
Ct scans without contrast dont show well nerve compressions, etc. My doc doesnt care to get any other scans w contrast or others (maybe in some cases its warranted and may depend on symptoms) because he discovers it all when he opens you up. He says often when he takes out the styloid and calcified ligaments, the nerves decompress by doing just that.

Also keep in mind, that alot of docs (like mine) like to read their own scans. Radiologist dont often measure length very well. Dr samji explained that the scans are done in slices and the software interpets between the scan slices. The radiologist said my calcifications were segmented when in actuality it was not. It was longer as well. Surgeons who does these surgeries look at alot of scans in their specialty and have a knack for reading them in more detail. Even when you get the length read from radiologist, I would give it full weight of accuracy.

would not give it full weight.

As Snapple 2020 said, nerves & vascular tissues don’t show up in a regular CT scan. You need a CT w/ contrast for that, & if you want to know about vascular compression, your head needs to be in the position that causes vascular symptoms (i.e. migraine, pulsatile tinnitus, visual disturbances, etc) during the scan or a compressed jugular vein or carotid artery won’t show as compressed.

I assume you’re referencing Dr. Cognetti in Philly. He will be able to advise you based on the CT you have but won’t be able to discuss nerve/vascular proximity to your styloids. Your symptoms can give a pretty good idea as to which nerves are being irritated though.

My CT was with contrast.

In that case they should be able to see if there’s any compression of the blood vessels, maybe they’ll have to harass them on that answer too!
If you see Dr Cognetti, I would check with him about the ligaments being calcified- there can be confusion with radiologists about whether the styloid process is elongated or whether the ligament is calcified; they can often just be measured together. We gather from a member recently that Dr Cognetti doesn’t remove the ligaments- hers were calcified the hyoid end. So you need to check if he’s willing to do surgery exactly what will be removed, as if any calcified ligament is left it can still cause symptoms.

Okay… drum roll please! I just saw the radiologist that I asked to read my scan. He asked if I got the updated report. I said no. He said he made sure they measured them. ? I said OH. My doctors office said they weren’t. He said yes, I made sure they did. He said he sees ES more than you would think. I asked if they tell the people about their elongated styloids and he said NO. Only if it’s the reason why they are having the scan. Don’t want to cause worry and concern if they aren’t having symptoms. ? Okay. So, are you ready for my measurements?? My right one is 6.6 cm and the left is 5.1. I was shocked. That’s pretty long. That’s 2 inches and over 2.5 inches. UHHHHHH. I won the dollar bet I had with my husband! When I do something, I do it BIG! Who has fangs longer than mine!?? I’m very curious. Thanks . He also said if it’s not bothering you, forget you have them.

Once an Eagle, always an Eagle! There is NO escape!

You only THINK you flew away… I am collecting different eagles that I may want to permanently mark my body with… I have to narrow it down. I don’t want anything big, maybe like the size of a nickel. Maybe I will post some for opinions.

Those are some long styloids, Butterflykg! We have had a few people in the 6-7 cm range but not many. You can use the magnifying glass icon to search for posted styloid lengths. I know some doctors are reluctant to talk length w/ their patients because they feel “this isn’t a competition”. HA! Little do they know!!!

I actually never found out how long mine were. Was just satisfied that having them removed turned my life around.

Very impressive! I have read of someone who had 14cms styloid, so you’re not a winner in that sense, but glad that you won the bet with hubby