Hi! Im new here. For i months ive been trying to figure out whats wrong with me so heres my story.

In June 2020 I was trying to quit smoking and wanted some motivation so I googled some tips. While doing so, symptoms of the C word popped up. I found myself over swallowing and started getting anxiety. Ive had but 1 other anxiety attack in my life. Im 30 years old and female. (Earlier info I was in a bad car accident where i was t-boned in 2014 that left me with damage to C1-C6, and a few torn ligaments and muscle issues in left side of neck which I recieved chiropractic care for after) of course i also had whiplash) Anyways, I quickly developed the lump in my throat sensation a few days later that came on later in the day. I did a lot of poking and prodding looking for lumps and such in the first couple months. I saw my GP and she put it down to anxiety. After a month it was more consistent so I saw an ENT. He scoped me through my nose and saw some mild inflammation on the left side and thought maybe acid reflux. He put me on a PPI and ordered an ultrasound of my SCM as it was a bit swollen and my thryoid. All was normal although i did have some swelling in my SCM. This helped put my mind at ease but the lump in the throat feeling wasnt leaving. Seems when i was stressed it was more present. I was terrified I had the C word still so I requested a CT in july. It came back normal except some cervical changes. So i went to my chiropractor for awhile with no change. Then saw 2 other chiropractors to see if they offered different tactics. Well in November I was in another car accident but other than vertigo being a new symptom nothing really changed. I saw a chiropractor for 3 months who tried all sorts of things. Also during this time i was doing PT with dry needling in my scm, shoulder and back as well as seeing a massage therapist every 2 weeks. 0 change in symptoms. I then was told to see an Upper cervical chiro which cost me a lot of money for 4 appts. 0 change. Then i had one tooth become severely sensitive to pressure and hot and cold. I couldn’t chew on that side at all. My dentist did a cone beam scan and coupdnt find anything but said a crown would fix it. Also made me get a $400 custom mouthgaurd So I reluctantly did it for relief. That was also out of pocket. It has helped the tooth but its still more sensitive than it ever was before. Thr mouthgaurd hasnt donr anything. Fast forward Ive been scoped twice and seen 3 ENTs, 2 have scoped me. One thought maybe tmj as I clench in my sleep. Joints are fine and i have no pain chewing or swallowing. The lump in my throat went away but instead I have a tight/pulling pressure feeling in my throat that is 24/7 constant. Is worse when im tense and oddly I cant feel it when im actively eating but comes right back after. I will list my symtoms below. It has been almost 9 months since this started. Someone mentioned Eagles to me so I learned to turn my scan into 3D. It seems mine are at an angle and only in a certain position can i get the length of 3.5 on my left and about 3.2 on my right in a posterior view. All symptoms are on my left.

Left sided throat pressure/tightness
Left sided tongue tingling, tightness on thr back and side
On and off earaches that last for 5 min- an hour or 2.
Left side of neck minimally swollen
Feeling of lymph nodes in side of neck but not seen from outside and no growth since noticing
Really tight muscles in left neck and shoulder with no relief from massage/ice/heat/acupuncture/dry needling etc
Runny nose randomly each day but no known allergies
Aches down the front of my neck
GI issues

Recently Ive discovered I can feel my styloid on the left just under the corner of my jaw. If I carefully push on it it radiates pain into my ear and around the area and makes kind of a crunching sound. Im careful not to break it. I will attatch pics and mostly Id like to hear if others had symptoms of the tongue that wasnt burning as mine doesnt burn and just one side, and opinions on my styloids. ! Doctors have assured me if this was sinister I would have a lot my severe symptoms after 8 months plus no detection on my scans. Please dont mention horror stories of the C word at all. I havent lost weight and im not in pain, except u der my ear if i tilt my head too deep. Im severely uncomfortable. 20210315_225546|666x500 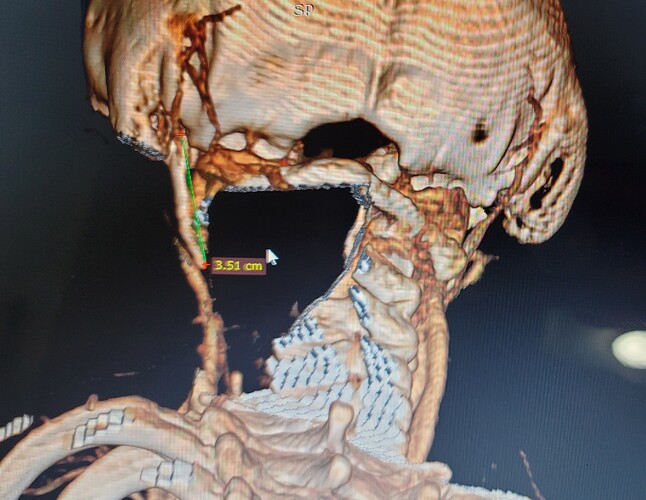 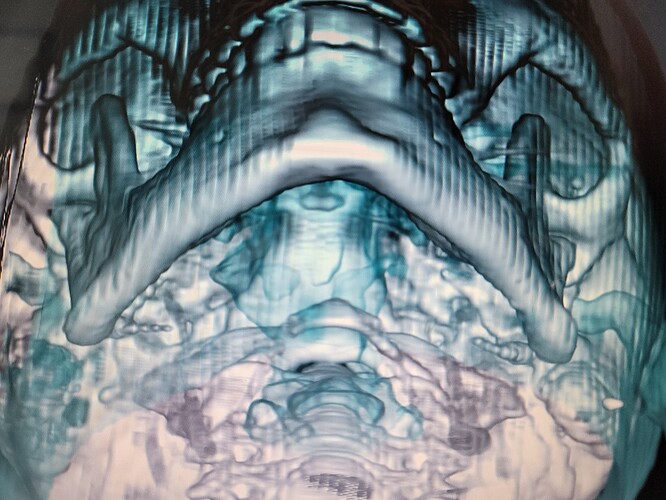 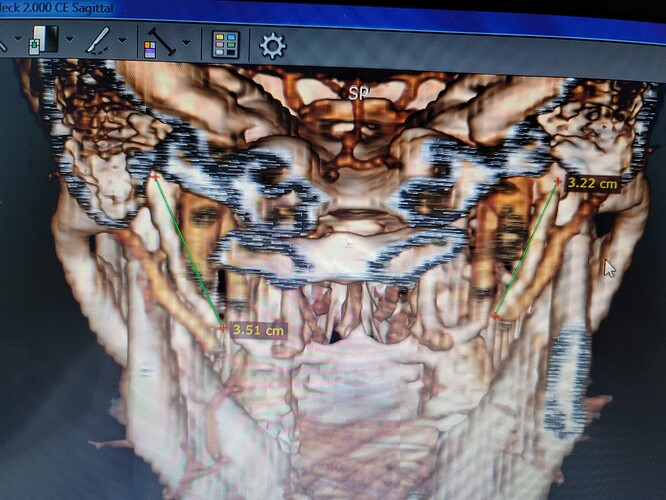 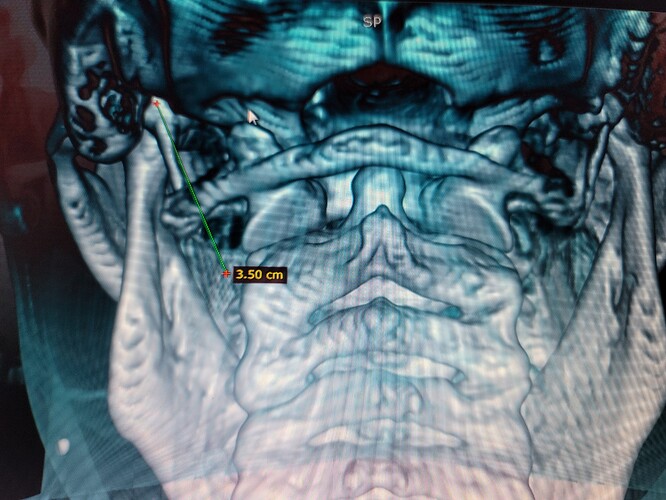 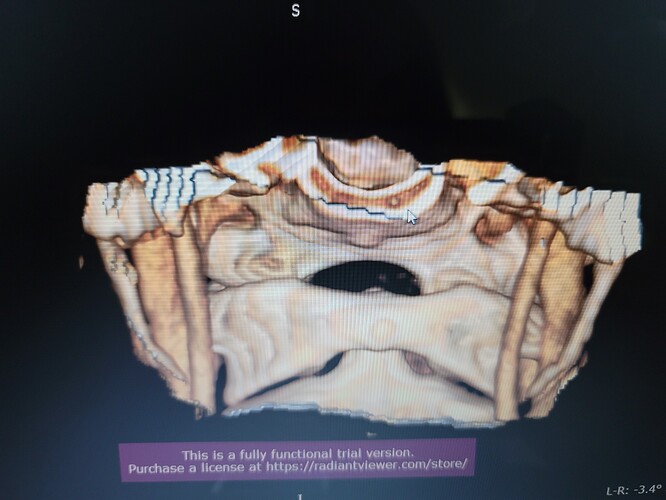 I’m sorry for all you’ve been through but am glad you found our forum. Your symptoms all align w/ ES symptoms. Your styloids are pretty gnarly looking, Chill. Getting those things out of your neck should help a lot w/ reducing or stopping your symptoms!

Thanks for your reply! I kniw they arent super long but im hoping due to the curvature is enough to convince a doctor that this may be the culprit as nothing else makes sense that hasnt already been ruled out.

Measuring the styloids isn’t always accurate, but the fact they reach down past the first vertebrae shows they’re elongated, & I agree that they are very angled! There are research papers which state that angle causes symptoms too. It’s certainly worth seeing someone with ES experience!

Thank you Jules. I have an ENT appt on april 27th. Im unsure of his knowledge but will see what he has to say. My CT is from nearly 9 months ago so im not sure if length could have changed in that time or if he’ll order a new scan.

A new scan w/ better angles for viewing the CT wouldn’t be a bad thing, and yes, they could have grown a bit in the last 9 mos.

I had tongue symptoms that were not burning. I felt like I had something pressing against the back of my tongue where it attaches near my throat. It was a constant pressure like something was trying to push my tongue forward out of my mouth. I also had the same sensation in my left eye - pressure like something was trying to push my eyeball out of the socket. Both symptoms were gone when I woke up from my left styloid surgery. Your SCM & shoulder symptoms are likely due to irritation of your accessory nerve which innervates that area & is often irritated by an elongated styloid process. ES symptoms do seem to come & go - some days are much worse & some days almost normal. Stress makes symptoms worse because stress raises cortisol levels in the body which increase inflammation, & inflammation increases irritation of areas that are already compromised. Thus symptoms get worse.

Thank you for responding. Yes thats kind of what it feels like in my tongue. Like pressure or a really tight feeling but I have full function. Sometimes its just the back and sometimes all the way up the side of my tongue. I dont have any eye symtoms thankfully as that would be very difficult for my job. The throat pressure and tongue stuff are thr most constant of my symptoms. In the beginning they were more intermittent but the last few months constant. The only real pain i have is tilting my head under my ear. We’ll see what this ENT says. Id really like to not take another CT cause if I can be diagnosed with the one I have and surgery is an option then id like them just taken out or at least my left one thats bothering me.

To save wasting your time it might be an idea to ring ahead to the ENTs office to see if they’re aware of ES as many doctors aren’t, or don’t believe it; it’d be a shame to get there & they won’t even consider the possibility…

Thays very true. I think ill do that tomorrow. Theres only one known ENT for Idaho listed and hes like 6 hours from me. But I did show my images at my dentist the other day at my 6 month check up and he asked if I heard of ES. It made me feel more assured although he cant formerly diagnise me. My images are on a disc so im unsure how to get that to someone like Dr. Samji and I have medicaid so im also not sure out out of state billing other than it can be a lot harder for approval of out of state surgery so im hearing.

You can reach out to Dr. Samji’s office and they will email you instructions for mailing your scans to them. If you are approved for a consultation it’s $500. They told me they do not bill insurance for that consultation fee, but they will bill insurance if I have surgery. I don’t know much about medicaid, but I would be surprised if they would cover someone out of state unless there is nobody in state. If I were you I would start by inquiring with your insurance and go from there. I hope you can find some answers quickly. I know how hard it is to feel so unwell.

There is one person in my state but im not sure of his number of surgeries. Ive never had a major surgery so should I be needing this surgery I definitely would like it to be with someone experienced. Is the consult after he has diagnosed or you send your stuff and pay the $500 to get thr answer essentially?

UPDATE: I called my ENT ill be seeing on april 27th and asked to speak eith a nurse to ensure the doctor has knowledge of Eagle syndrome. The receptionist said she will get a note iver to the nurse to call me to discuss but she knows they see a couple patients that do have that diagnosis so that makes me feel better. Ill update again after I hear from nurse.

I completely understand. I feel the same way. We want to know that the person operating is the best choice. I have also never had major surgery and I’m very nervous.

I mailed my scans to Dr. Samji and he reviewed them for no charge. I believe the fact that he has approved me for a consultation would mean that he agrees about the ES diagnosis. I will be paying $500 the day of my phone consultation. His assistant mentioned something about that cost going towards the consultation and the pre-op appointment but I may have misunderstood her. If you decide to send your scans to him you will actually have to physically mail the CD to them, but definitely call first so they know your reasons for sending them.

Good to know. I may just do that depending on how my appt goes on the 27th. I dont mind paying $500 out of pocket but for the surgery itself i dont have that kind of money to fork out for out of pocket. So as of now it seems its a hurry up and wait. Really since im just severely uncomfortable more so than in real pain i can wait a few months on surgery but for putting my mind at ease I need a diagnosis from a Dr instead of myself.

That’s great news, Chill! ENT cancer specialists seem to be the ones who are familiar w/ ES & many are skull based surgeons which is what you want to look for as well.