Hello everyone. I am so glad to have found this forum. I would like to introduce myself and ask a few questions. Hopefully this post will be informative for some of you as well as for me.

Like many people, it seems, I have quite number of strange and often vague symptoms. In this post I will limit myself to the main ones. They are:

Most of the symptoms are worse or more frequent on the right side, but they all do occur on both sides. Unusually (I am told), the throat pain is directly in the middle.

Minor triggers are eating, talking, and exerting myself physically. The major trigger is putting my head in certain positions. (Or rather, moving my head out of a certain narrow range of neutral positions.) This is what led me to suspect ES. The absolute worst position is pulling my head back over my shoulders and looking down. This triggers the foreign object sensation and disorientation within a couple of seconds, and if I hold it for any length of time then all my symptoms start to come on in force.

I have had several brain and neck MR and CT scans looking for various problems (none of them ES). The only person so far (besides myself) who has looked at the scans specifically with an eye to ES is my physical therapist, who specializes in postural issues relating to cerebral venous outflow. He noted moderate compression of the internal jugular veins between the styloid process and the C1 vertebra and said he is “religiously convinced” that compression of the nerves and blood vessels between the styloid process and C1 is the source of my symptoms.

I was scanned in a non-exacerbating head position, so I think it might pay to have imaging repeated with my head in an exacerbating position to see if the compression becomes more severe.

In addition, the CT scans show a space between the right styloid process and the temporal bone. It looks like the styloid process is floating detached. I have not had a chance to ask any doctor about this and thus don’t know if it could be an imaging artifact or a fracture or what. On the other hand, as far as I can tell by looking at my own images (which obviously is not that far), my styloid processes are not elongated. They are both between 2.5 and 3.0 centimeters.

Who diagnosed you with glossopharyngeal Neuralgia? And have you taken any medications for it?

I had that diagnosis from a neurologist who also thought it might be ES. Then my ENT said ES and I had surgery 6 days ago. Still having symptoms but they say it can take weeks for nerves to settle down.

You need to go to an ENT to look at you and the scan. Where are you located.

The angle of SPs is important, & also as you’ve mentioned, there can be compression between the cervical vertebral processes too, especially if they are perhaps long too. So if you did consider seeing another doctor, there are research papers which show the angle is important you could take a copy of. Also the width/ thickness is important as well, I don’t know if there’s any comment on that?
As for the SP looking like it’s floating, the stylohyoid ligaments can calcify too in spots along it’s length, so it could be part of the ligament. And they do ‘grow’ in weird ways, sometimes with thicker bits so they look like fingers with joints!
The neck cracking or crunching seems to be quite common, but I don’t know if it’s an ES symptom or that lots of members have other neck problems? I have it at times, but don’t think it’s ES, I’ve put it down to tension in my neck, it seems to be worse then.
Some members have been able to have a CT with contrast in the position which gives them symptoms, so it is possible- the only thing is you’re exposing yourself to more radiation if you’ve had your CT recently, so bear that in mind .
There’s info in the Newbies Guide section about vascular compression & symptoms; I had bilateral jugular vein compression so had some very scary symptoms, loads better with surgery, so keep strong, & keep pushing to get some treatment…there are doctors with experience listed in the Doctors Info section.
You can always post the images on here, not that we’re doctors!

Many thanks for the responses. Jules, I am planning to see another doctor. I guess my plan is to keep seeing doctors until I find one willing to look into this. I am however wary of showing doctors papers. In my experience it is a toss-up whether they take you seriously or immediately write you off as a crank.

The neck cracking definitely goes along with tension for me as well. But it is hard to say whether the tension causes the cracking or there is some underlying dysfunction that causes both the cracking and the tension. The thing that actually triggered a lot of my symptoms, including the crunching, was a prolonged attempt to ‘correct’ my posture. I suppose my main concern is that my real problem is minor instability of the upper spine, that instability of C1 is narrowing the atlanto-styloid interval, but that that narrowing is not the only issue and rectifying it will not correct the root problem.

I am also mindful of radiation exposure, especially given that I am fairly young and have already had a good number of CT scans in my life. But I’m willing to roll the dice.

The glossopharyngeal neuralgia was diagnosed by a neurologist at a nearby university hospital. He offered to prescribe various medications for it, but I declined. I do not like taking drugs, especially ones that act on the central nervous system. If a drug could alleviate all the symptoms I would consider it, but as far as I know drugs would only potentially help the throat pain, and maybe not even that. So I choose to deal with the pain. I am also 100% convinced that there is an underlying mechanical problem in my neck and I do not want to simply mask the pain with drugs that will not fix the problem.

And here is a picture of the incredible ‘floating’ styloid: 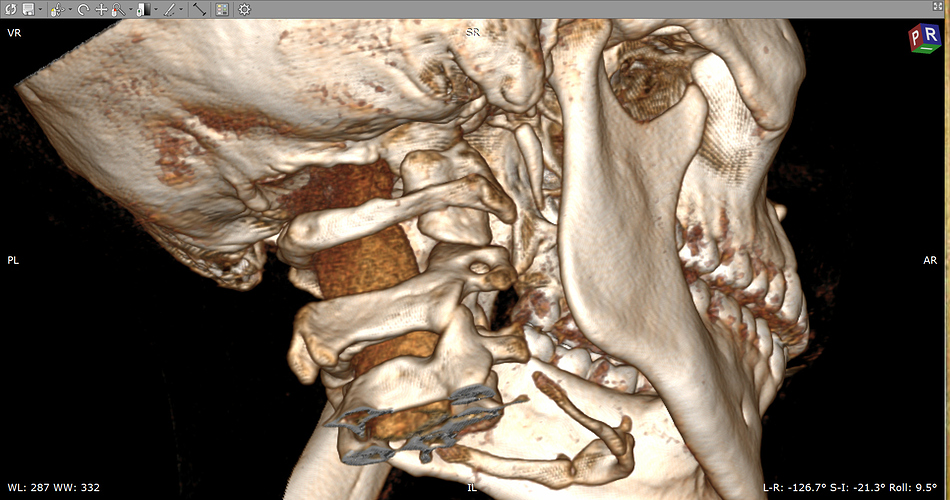 I think you would appreciate this research article:

I too have the upper cervical crepitus which can be difficult to pin down as there is much room for differential diagnosis. I am ~8 weeks out from R styloidectomy and venoplasty and since then the crepitus on that side is dramatically reduced. The article above discusses entrapment of the IJV between the C1 tubercle and styloid. For me this osseous contact was a major factor in the crepitus. I did not require a partial C1 tuberclectomy but some do. I am waiting to have the other side addressed, crepitus is significant and reproducible there. But just to muddy the waters I also have a skullbase CSF leak and that is contributing to my neck stiffness due to brain sag and brainstem compression. Physiological testing of my craniocervical ligaments are intact but there is a soft end feel on the R alarodontoid lig so pursuing possibility of mild CCI.

Hope this is helpful, lots to differentiate and consider.

Thanks for this @justbreathe. It’s very good to know that your crepitus has decreased after styloidectomy. I have been reading a lot of papers on jugular venous compression lately. I have been trying to find an author of one of these papers who sees patients in the US, but almost all the authors seem to be in China.

Something I haven’t understood is why none of the papers on styloidogenic jugular compression use the term “Eagle syndrome” although that does seem to be what they are dealing with. It took me several months to realize that these conditions are really just two sides of the same coin.

I also have a suspected CSF leak. I did not mention it in my first post because I wanted to keep things simple and concrete. One doctor thinks the leak is in the thoracic spine, one thinks it’s by the right ear, one thinks I don’t have one at all. Scans show slight brain sag, distension of the superior sagittal sinus, and a questionable fluid collection in the right ear canal (if I remember correctly). My physical therapist’s theory is that jugular compression leads to high CSF pressure leads to a leak leads to low CSF pressure leads to chaos.

Has your leak been confirmed on imaging? Also, I would be enormously grateful for any tips you provide about finding doctors knowledgeable about this whole complex of ES, jugular compression, CSF leaks, and CCI. I have one doctor specializing in CSF leaks but who knows nothing about ES, now I’m making an appointment to see a doctor specializing in ES who I suspect will not know much about CSF leaks or the rest of it…

my neck does that too. I would definitly get another doctors opinion.Praying for you