New to the forum...could use some advice

A little background… I was diagnosed with essential palatal myoclonus a little over two months ago. All neurologically based causes have been ruled out by a brain MRI/MRA, which leads me to believe that this condition is structural in nature. So I have been working with a physical therapist over the last month to work out any kinks and muscle tension in the jaw and neck. During a session, I experienced really bad tenderness around the ear and jawline. The therapist mentioned that this area is where the styloid process and stylomandibular ligament were located. Upon researching, I found a few cases of palatal myoclonus that were resolved after styloidectomy. Forgive my ignorance on the topic, but can this condition cause nerve compression? (don’t know the name of the nerves that innervates in that area). Long story short…I went ahead and got a panoramic x-ray done at my local TMJ specialist. Here are the results. 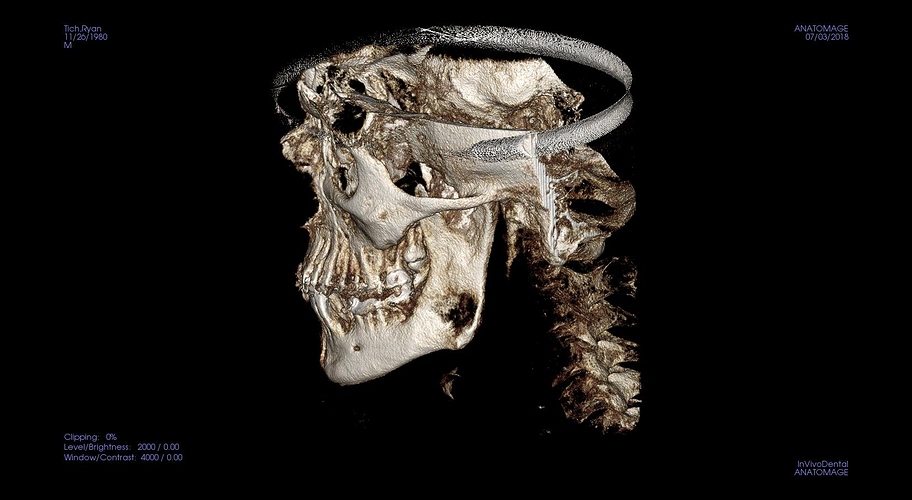 Any advice would be greatly appreciated. I’ve had varying opinions by a few different Doctors. I’ve seen longer styloid’s, but they seem quite wide. Is the width of mine clinically significant or normal? Also, can one still have Eagle’s syndrome based on the calcification of the styloid process?

Thanks for taking the time to read,

Absolutely! Palatal myoclonus can be caused by ES. We have a published author (Ear_Mom) on this site who documented her son’s journey w/ PM, & it’s ultimate resolution when he was discovered to have ES & had his styloids removed. Sadly, he had to go through ES surgery 4x (2x for each side) because he was young & though his styloids were removed at his skull base, they still grew back. If you click on the magnifying glass above & enter Ear_Mom in the search box the discussions she’s participated in will pop up, & you can read them. Her book is called “Connecting the Dots” & is available on Amazon. It’s a quick but fascinating read.

Your styloid not only looks thick & VERY pointy but also like a corkscrew (not the usual styloid shape). It would be interesting to see what your other side looks like.

Length, thickness &/or angle of growth can all contribute to a styloid process’s creating ES symptoms. ES is defined as elongation of the styloid process(es) or calcification of the stylohyoid ligament(s) or a combination of the two. ES can be unilateral or bilateral. Because several cranial nerves run through the area where the styloids reside, they are often tangled with, compressed or otherwise irritated by elongation or calcification of the SPs or the S-H ligaments which causes a wide & unique variety of symptoms in a given individual. Though there are many symptoms that are predictive of ES there are also many that doctors refuse to blame on ES until proven otherwise i.e. the styloid(s) are removed & those symptoms disappear.

There’s info & links to research papers in the Newbies Guide section showing that angles of styloid processes can cause ES as well or instead of the length, & yours certainly look wide, angles & very pointy at the end.
And as I mentioned, the 2017 doctors list has doctors who are experienced with ES if you do want to take this further. We’re not doctors here, just people who’ve been through it ourselves, but loking at your scan pic, I think it’s worth pursuing as a diagnosis.
Good luck!

Thanks for the reply Isaiah! (btw love the reference of your username) Yes, I read about Sherri’s(ear mom) story on a Facebook support group. She was truly involved in helping others, despite the ups and downs of her son’s condition. It’s awesome to be a part of a group that instills hope unto others! At this moment, my faith in God is my driving force.

I believe that the glossopharyngeal nerve is the one being compressed in my case. The clicking sounds in my ear are very irregular and highly dependent on neck movement.

Anyway, here is the image of the other side of my styloid process. I was going to put both of them up at the same time, but new users on this site were limited to one at a time. 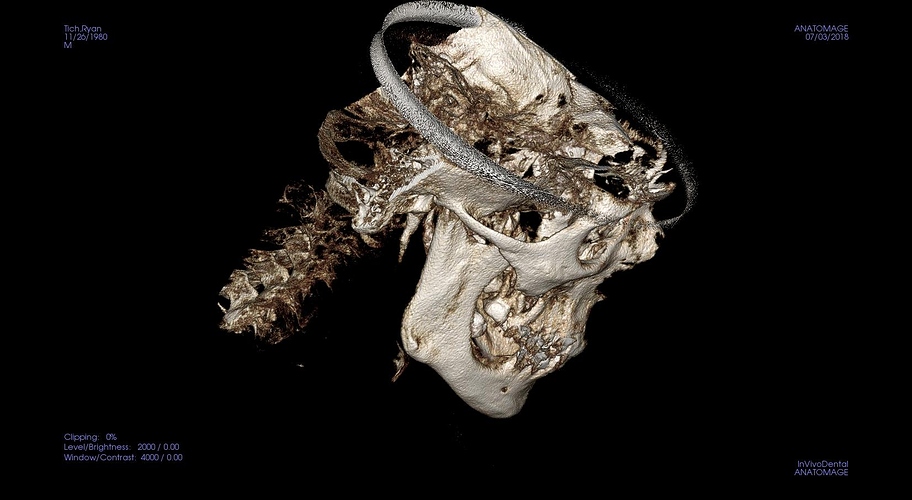 Thanks for your input Jules! I will definitely take a look at that doctors’ list that you mentioned.
I realize that doctors are not perfect, but finding an empathic one that truly listens can be chore. Sometimes the opinions of those who actually suffered from a condition are more valuable!

Thank you for posting your other picture! I totally agree w/ Jules about your styloids - thick & very pointy!! I’m glad you’ve done some looking around on this forum. I also agree the best support will come from those who’ve “been there & done that” w/ ES. No one who hasn’t had it could begin to comprehend the odd & varied symptoms that ES can cause.

Faith in God is the best thing to have in the midst of a health crisis. He made us & is truly the only One who knows the intricacies of the human body. I’ll be praying you find a doctor who is supportive & willing to take further steps in helping to diagnose the cause of your palatal myoclonus whether or not it’s ES.

Based on Ear-Mom’s experience & looking at your styloids, I’d say there’s a good chance you have the same thing going as her son did & thus, surgery could be very helpful for you. As Jules said, though, we’re not doctors so our opinions are only that - opinions - not diagnoses of any kind.

I just wanted to reply that you seem to have a very similar issue to me. I had intermittent Palatal Myoclonus. I didn’t want to do botox or anything and came across an article about neck posture and Palatal Myoclonus. Ever since I have fixed my posture especially sleeping, it has gone away. BUT and this is a big BUT, I started to get an horrible earache, like I use to get one I first got regular tinnitus about two years ago. No infection but when I touched around my stylomandibular ligament I noticed severe pain. The earache I get now is not neuralgic type in anyway. It is more like a horrible earache that gets worse when eating/talking/grinding my teeth. So every doctor thinks it is TMJ/D but I definitely don’t have any pain at my jaw joint itself. I did have a doctor say he would do a CT Scan but then of course never followed through with my insurance to get approval. Honestly I don’t know if I just have a stylomandibular ligament pain Ernest Syndrome thing going on, instead of Eagles. In which case definitely not the cause of my Tinnitus. It is still weird to this day that I got earache around the same exact time I got Tinnitus but there was no infection. Anyways I thought it was weird you had intermittent palatal myoclonus and doing therapy caused stylo pain like I seem to be experience.

As far as Eagle’s causing Palatal. I still haven’t found a connection. I know Ear_Mom has stated it helped her son but Palatal Myoclonus happens due to the Tensor Veli Paletini muscle which has it’s motor control from the Trigeminal Nerve. I don’t know if Eagle could push on the Trigeminal Nerve and not cause Trigeminal Neuralgia type pain but instead cause the motor branch to go crazy.

The Trigeminal Nerve is one of the cranial nerves regularly interfered with by ES. MANY people have ES symptoms related to Trigeminal Nerve entrapment, entanglement, or irritation caused by either elongated styloids or calcified s-h ligaments or both. It wouldn’t be surprising to see that ES could indirectly be a cause of Palatal Myoclonus because of the frequency of its interaction with the Trigeminal Nerve.

Absolutely it can cause Trigeminal Nerve entrapment, but I always thought it would affect the sensory part of the Trigeminal Nerve and not the Motor Nerve which is what controls the muscles that cause Palatal Myoclonus. That was more as to what I am hinting at. But I am not a Neurologist by any count.

So, for the sake of argument, my hypoglossal nerve was wrapped around my right styloid process. In order for the styloid to be shortened, the nerve had to be partially unwrapped which, of course, irritated/damaged it. The motor part of the right side of my tongue did not work for about 4-6 months post op & by 9 months post op was functioning fairly well again. I had full feeling in my tongue but no coordination or ability to move half of it when talking & eating. Neither am I a neurologist, but based on this experience, I speculate that the motor &/or sensory aspect of any nerve that is irritated or damaged could experience a functional change.