Hi, all.
I’ve been reviewing my CT scans from 2017 because, while I never ended up getting surgery because my ear pain subsided, my vascular symptoms have been increasing since then. Brain fog, headaches, and primarily a heavy or swimmy sensation, especially in the first half of the day.

Unfortunately, since I don’t know the timing of the contrast flow, I don’t know if I’m looking at arteries or veins. Still, I wanted to ask the opinion of the fine forumers here. (I know…we always say “I’m not a doctor”…so I’ll take it with a grain of salt, haha!)

This is a front view showing the styloid processes and vessels. 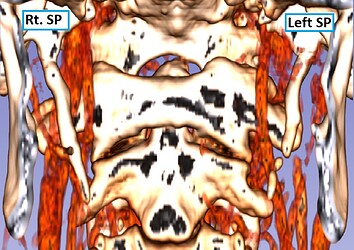 In this top-down image, it looks like a large vessel is “squished” between the right styloid process and vertebrae C1. I don’t know if this is a normal amount of squishing. 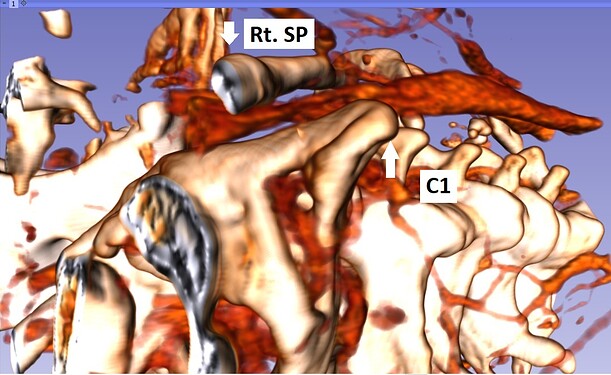 This bottom-up image shows the same thing. What’s interesting is that while there is a smaller vessel on each side (lime green line), there doesn’t appear to be a match for the large vessel (blue line). Is it so pinched on the left side that contrast can’t flow through it, or is this just an extreme example of single-side vessel dominance? 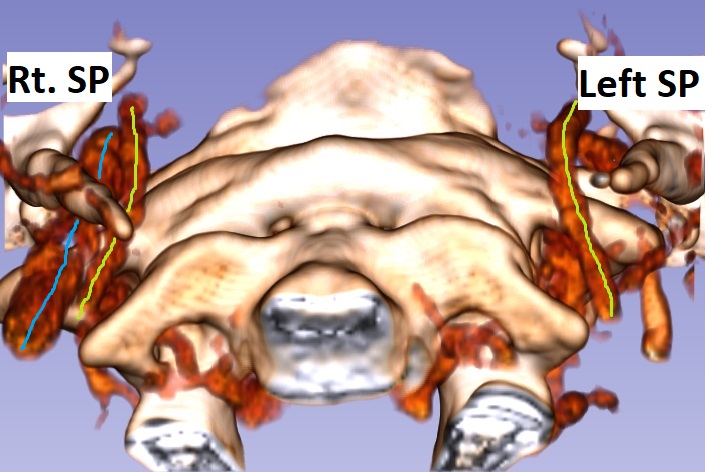 This is a thin-slice, bottom-up image. It shows the flattened shape of the large vessel (blue dot) on the right side and the absence of a matching vessel on the left side. (In other slices, the vessel is round. It only flattens when between the SP and C1.) The two smaller vessels are indicated with lime green dots.

I think from your symptoms, it sounds possibly more like jugular compression; there’s certainly compression between the styloid & cervical process. I’m not an expert on the blood vessels though so wouldn’t like to say which is which, we have some members with more knowledge about vascular issues so maybe they’ll be able to help!

I agree w/ Jules all the way around. Definitely looks like your right jugular is compressed. Not sure about the left & don’t have an answer for why the thin slice bottom up image shows the compression on the right but no sign of the jugular on the left. It would be good to ask someon who’s got experience w/ CT scan slices. Hopefully if one of our members can interpret the slide more accurately, (s)he will reply to your post.

Many people w/ vascular symptoms get complete relief after having the styloid(s) removed. It might be time for you to think about taking the next step if your symptoms are beginning to take a toll on your ability to live normally.

Hi fivetiger,
Thank you for sharing your pictures. It is always interesting to see.
I agree with jules and isaiah and probably add something to them.

I also have the Eagle jugular syndrome (still, after 2 surgeries!) And have therefore been busy with these recordings and hopefully can help you further, even if I am not a professional radiologist.

I think you can see both in the recording, arteries and veins. The vessel marked lime green should be the internal carotid artery. The ones marked in blue are the internal jugular veins. In my opinion you can see a clear stenosis of the jugularis interna on the right and a severe stenosis on the left. Hardly any contrast agent comes through on the left and this means that the left IJV is not fully exposed, as you correctly suspected. By the way, it looks very similar on my left side.
I hope I could help you.

Thank you for your input, TheDude (& Jules). Now that you’ve both seen compression w/ the left IJV, I can see it, too. Appreciate our teamwork on this forum!!

Thank you all for your thoughtful responses. The scary thing is that those images were from 2017…what must those veins look like now?! And with the symptoms worse too!

Anyway, since I have these CT scans already, should I go ahead and ask my doctor for a venogram? Also, what test would show cranial pressure? My head often feels like an inflated balloon is sitting in there!

TheDude - Thanks for your experienced input. I think you’re right about the images showing both arteries and veins, which I wasn’t expecting based on my (mis)understanding of the protocol, but it does better match anatomy photos.
Sorry to hear that you still have the vascular symptoms. Do you think your symptoms haven’t resolved because you still have some length of styloid process remaining, or you think you also need stents to restore blood flow? Did you have another surgery this past January?

They really messed up with me. The first operation (right and left simultaneously in 2018) was grossly nonsense. There, the suckers did not shorten the SP as discussed, but rather the hyoid bone and parts of the SH ligament. After that I had more problems.
At the beginning of 2019, everything should be done right in another clinic known for ES in Germany.
Unfortunately, there the approach followed is to shorten the SP just a little, up to the attachment of the ligaments, e.g. SM ligament. However, this procedure has already improved the pain a bit, especially on the right side.
I now have an almost 3 cm long styloid on the left and about 2.5 cm on the right compressing both IJV, similar to you.

Here in Germany most doctors do not attribute any disease value to these findings. It seems to be largely unknown and has only recently appeared in the specialist literature.
I would say that I also have ICP symptoms and also cranial nerve symptoms as described in the literature.
My vascular doctor (incompetent for the question) was unable to carry out a meaningful Dopper ultrasound. MRI images were also without findings. A neurologist was able to determine “tension headaches”. At the ophthalmologist no papilledema was recognizable.I think an angiography is too risky and would not change anything in my situation…
I am currently planning my surgery with Dr. Samji as my last chance for a good outcome, initially for the left side. Video consultation was very nice so far.

If you also have typical complaints that severely impair the quality of life, which I strongly assume, it is best to go to a very experienced ES surgeon.
As I judge from reading this forum, Dr. Samji perhaps the best and most experienced in our galaxy. In the USA there may also be several other ES surgeons who can be recommended - I would advise against the “expertise” here in Germany

I don’t think that I will need stents. Just need a sufficient styloidectomy without a lot of new scar tissue, or two…

The scans show what’s going on, or what was going on a few years ago…you could have a an updated Ct with contrast to see, it depends on whether you want to find out if things are much worse, & can afford it if that’s an issue. The tests for Intracranial Hypertension can be invasive- in the UK they do a lumbar puncture, which has risks, so that’s something to consider, although some members have had a doppler ultrasound on their necks to see if vessels are compressed. There’s quite a bit of info about Dr Hepworth & some of the tests he’s done for vascular issues in the discussions you could search for.
As TheDude says it’s worth seeing a very experienced surgeon; we don’t have much info on the doctors in Wisconsin, so it might be worth travelling. You could send your scans & radiology reports to one of the doctors on the list, if you are able to travel?

Agree to Jules. I forgot lumbar puncture, which is quite invasiv and has its risk. I haven’t done it yet too.

I met with my primary doctor on Friday to talk about my fogginess and constant headaches. I sent him the images from this post ahead of time and brought print-outs with me. He wasn’t interesting in even taking a quick look. He said he wasn’t an expert and wanted to see the text report from the radiologist. Fair enough, but he could have taken a peek, right? Grrr…

Anyway, I found the original radiologist report. At that time, they were only using the soft tissue scans to look for tumors that could be causing my ear pain. But the report does say, “Jugulars are patent”.

Patent? I mean, I guess blood is getting through at least one of them, but they sure look compressed to me. Maybe they weren’t looking at that SP/C1 area. Unfortunately, as soon as my doctor sees “patent”, that’s it. Luckily, I have an appointment with my ENT coming up, and he’s a bit more informed about ES.

Had a short look what “patent” means. I wouldn’t agree to that when I’m looking at your images. I bet my radiologist wouldn’t either. Most doctors do not know IJVS and don’t attribute any disease value to it. I’m very sorry that you experience similar incomprehension.
Maybe it was overseen and it is worth to ask the radiologist for a second closer look?

So sorry that you had a frustrating experience- it sounds like you were as prepared as you could’ve been. I hope that it goes better for you with the ENT…

So frustrating, fivetiger!! You did do a good job “arming” yourself. I have little respect for doctors who are not willing to take a minute to learn something new from a patient. What you had for him was information he could have pursued later that would help him be a better informed doctor. Sad…

TheDude has given you good information. There’s nothing like experience to teach us, eh?!

Keep all that info together to give to your ENT in case he has questions when you see him.