Stylo-Jugular Venous Compression Syndrome: Lessons Based on a Case Report

Here is an interesting case of 36 year old woman with long styloid process on the left side compressing her jugular vein and transverse sinus thromboses. She was treated with anticoagulation medicine since she refused styloidectomy. Her symptoms improved after the anticoagulation which I think it was to do with the thromboses (clotting) than the compression of the jugular vein.

Stylo-Jugular Venous Compression Syndrome: Lessons Based on a Case Report

That’s a good article, thanks! It’s good confirmation for anyone with this struggling to get treatment as they say that surgery is the best option…

I have also seen folks in here improve after taking anticoagulation. I remember @blossom mentioning it at some point. This makes me wonder if Jugular compression is somehow contributing to minor clotting of the cerebral sinuses and therefore improvements are seen when blood thinners are taken. It is also known that vascular narrowing is potential risk factor for clotting. It is anyone’s guess since this study does not prove that either but I assume the relief of symptoms may have to do with the clot-clearance as opposed to improvement of the compression which did not change.

Yes I agree, I think it likely does contribute to clotting…

It could be clots, or it could be the plavix thinned my blood enough that it could move faster/easier through my compressed vein. Hard to say! My right jugular was completely occluded such that they could not get the venogram catheter up that side during surgery. I did feel a ton better when I was taking it. I took it for about 3 weeks at one point after my surgery as well, to get me through a rough patch. Now I am off of it and feeling great!

Here is an article matching this discussion I remember someone posted before.

I think this letter to the editor has been posted here before. I just can’t find it, so I thought to post it here again. It is about the question “is Jugular Eagle Syndome life threatening?” and mentioned sinus vein thrombosis.

I’m on blood thinners too and I think that helps a bit. I’m also a bit concerned about possible thrombosis. Actually I’m on Xa-Factor inhibitors (Rivaroxaban) for blood thinning again.

Here in Europe doctors usually won’t prescribe thrombocyte aggregation inhibitors like aspirin or clopidrogel. It is said that those probably won’t work on the venous side. In US it seems still working though. Personally I can confirm positive effects of aspirin too. Unfortunately I can’t take that all the time because of side effects. I never tried clopidrogel (plavix). Maybe that’s only marketing from pharmaceutical industry here in Europe promoting new anticoagulants.

What do you think about blood thinners? Would be interesting to hear what US doctors think about Xa-Factor Inhibiton.

Thanks Blossom, when I read that you felt a dramatic decrease of symptoms with blood thinners, I begin to wonder the mechanism this could work without removing the compression. My hypothesis was and still is that it has to do with bit of both or other unknown mechanism. I am happy for you that you are finally feeling better and you got rid off that nasty compression which could potentially not only cause intracranial pressure but also put you at risk of clotting which is life threatening.

Thanks @TheDude this is quite interesting paper. I tend to agree with the hypothesis proposed by the letter to the editor that extrinsic compression of the jugular vein by bones be it Styloid or C1 can indeed potentially contribute to clot formation in the sinuses as the 2 studies suggested. I think I have seen one case of clotting in here that involves jugular bulb which is not far from sigmoid sinus. I believe it was reported by @Msdstc and he is currently seeking to remove the styloid compression first prior to removing the clot. It is interesting that the letter did mention Pulmonary Embolism because I did mention the potential Pulmonary Embolism by dislodging the Jugular Vein Clot to MSDSTC without seeing this paper in here (Been a long journey surgery coming up for jugular vein compression. Need advice! - #135 by KoolDude).

My assumption of this phenomenon is that there is a bit of fluid dynamics about how blood thinners help the net flow of the blood through the narrowed space. I think what might be going on is that blood thinners reduce the viscosity (stickiness) of the blood by reducing the ability of the platelets to stick to each other making the blood more watery and more incompressible (A pure liquids such as water are incompressible) meaning that the flow rate of the blood before narrowing = the flow rate of the blood in the narrowed area. In physics this is known as ( equation of continuity). Since Flow Rate = Cross-Sectional Area x Velocity, the velocity has to increase in order to account for the reduced Cross-Sectional Area in the narrowed segment keeping the net flow the same (not entirely accurate since blood is not the same as water but thinning blood approximates water here). We all know this when we compress a pipe with our thumb reducing the Cross-Sectional area of the pipe spraying the water faster. So I hypothesize that there is some validity of the point that @blossom was making regarding blood moving faster/easier in compressed segment since viscous (thick) blood moves slower and requires a greater pressure (assuming heart rate is constant here) to move than thin blood would be. So the net effect is improved flow rate which can reduce the blood backlog enough to make people feel better is my big Assumption here.

Given the evidence that blood thinners do help some ES patients, I think it is good idea provided that you consult with your doctor on the dose and the frequency of taking them. I am really considering it but bit concerned about the side affects of them. Aspirin makes my stomach hurt.

For those physics-minded. I put simple fluid dynamic explanation I found in the internet below. 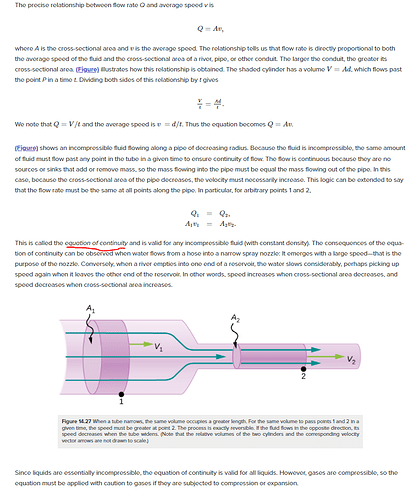 Thanks for all of this info @KoolDude! The blood thinners also served as an important diagnostic tool for me as when my pain subsided on them I knew there definitely was something going on with my jugular vein as we suspected and that helped me make the decision to have surgery. My surgeon did find scar tissue in my neck that was occluding my vein, so it was not just my styloid that was a problem though it contributed as well according to my doctor.

For what it’s worth I did not have any side effects on the blood thinner I was prescribed (Plavix) except that I was easier to bruise and any injuries I had bled more. I am glad to be off of it but it was a miracle drug for me and helped get me through the waiting period for my surgery.

Yeah I remember reading your stories since I was interested in Vascular Eagle before joining here. You did mention high velocities found in vascular doppler ultrasound study as well if I remember correctly. The scar tissue thing is surprising. They did not detect that in the imaging studies they did but the surgeon found it during surgery.

Glad that you have provided all your journey with ES in here. I particularly benefited from it.

To sum up, nonthrombotic IJVS may be a noteworthy risk factor for CVT occurrence, possibly due to the obstructed venous outflow induced by the IJVS. Besides, patients with nonthrombotic IJVS may possibly benefit from continuous anticoagulation and IJVS correction, although further well‐designed clinical trials with a large simple size are still needed to clarify these findings

I’m really glad to hear sharing my story helped you! Having an outlet among people who understand really helped me too.

I had my three month follow up appointment with Dr. Hepworth today and he mentioned he’s close to publishing an article about jugular vein abnormalities. I’ll keep my eyes open for it and will share here!

That will be good to see!

Finally got an update today I’m just at the end of my rope now. Everything takes WAY too long. I finally booked my consult with Hackman for late march, I’m hoping for a double styloidectomy and basically be done with this.

The updated imaging shows the clot has dissolved but there’s still some leftover. Prior to this my doctor had told me it was permanent and no procedure could remove it. I’ve looked around and I don’t think that’s true. I’ve found stenting of the jugular bulb has been done not for clotting but for other things. Anyways this has been a nightmare. I hope I can get the double done, get this compression off and move on. I’m a strong believer this is caused by cervical instability. Anybody who can guide me regarding that or give their thoughts that’d be super helpfjl

This is good news that at least some of the clot has dissolved. Based on the studies I read, Jugular vein stenosis, regardless of the cause, can put you at higher risk of clotting in the upper sinuses so removing the compression is a way at least to prevent further clots to develop. I hope you succeed with this upcoming surgery.

Thanks so much I’ll definitely update in the future. My consultation is march 31st I would expect surgery sometime in late April or may

I hope your surgery date can be scheduled ASAP after your consult, Msdstc! March 31st is not too far off.

Thanks I’ll certainly keep you updated. Getting married on Friday this week then off to Hackman the following week

So EXCITED for you!! I hope your symptoms stay at rest during your honeymoon (or will that be post op?). Wishing you the happiest of wedding celebrations!