Was diagnosed with eagles syndrome in end of July early August this year after years of suffering without answers…after finally finding a surgeon who both even knew what eagles syndrome was/had previously done an external styloidectomy and that also accepted Medicaid which in Alaska left me exactly ONE option other than the doctor who diagnosed me (that Had only done 3 intraoral styloidectomies) I waited 3 weeks to see him (his name is Dr.Endres who is not only an ENT but a head and neck surgeon) in which time after researching ES I read about vascular ES and discovering the symptoms were very similar to the episodes I had been having as to which I would have this searing head pain and this heavy weight on my chest and would drop to the floor when standing and lose my vision…my last episode caused an a car crash after going through a red light…I made several trips to the ER over the years including one in an ambulance back in May because this happened at a gas station in front of people and was told that I had orthostatic hypotension or syncope and even seizures and was even taking anti seizure medication up until my diagnosis… I asked to have a Doppler of my carotid arteries which showed that I had extrinsic compression of my left carotid arter upon turning my head to the right…Dr. Endres said that an external route seemed more suitable given my situation and was scheduled for surgery on September 26…the day before my surgery after I already had my preop I was told after I preregistered that Medicaid denied my surgery because of the billing codes…apparently there was no existing diagnosis code for both Eagles syndrome or a procedure code for an external styloidectomy…so they decided the day before after getting a prior authorization and everything that the codes they had used (diagnosis code for abnormal bony growth and procedure code for removal of abnormal bony growth) Medicaid would t except because they said that’s not what it was exactly or what they were doing exactly!

so it had to go to the state review board and they had to decide if and how they would pay for it…and after 23 days of worrying that they wouldn’t pay for it and suffering and scared that I might have another episode my surgeon’s office called and said it was approved!!!

My external styloidectomy is now officially scheduled on October 30!!! Just a week away!!

What great news! Wishing you the best with your surgery. Please report back to this page after the surgery! Reading experiences of others has helped me understand a lot about the condition.

So glad that it’s been approved & that you have a date for surgery. How scary that you had to go all that you have done before getting a diagnosis, it shows there’s hope!
If you haven’t looked already there’s lots of info in the Newbies Guide section about what to expect after surgery, & lots of stories in the past discussions which you can search for to help you prepare.
Will be thinking of you & will pray for you, God Bless!

Dr Endres isn’t on our list, can you let us know the details so I can add him when I update it? Thanks

HIGH FIVE. ME TOO! Consultation to schedule a date on Friday (woo-hoo!)

This is so wild; I am so sorry that you had so many issues, but how exciting that surgery is a go.

Good luck to you, hopefully you’ll add to a growing list of success stories. 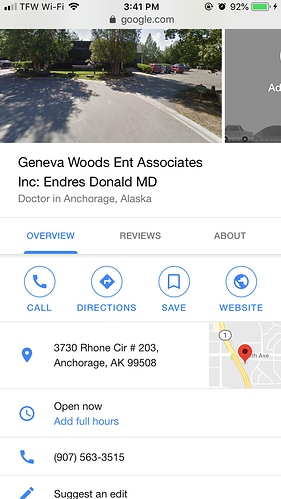 It’s been a long & winding road for you, but you’re almost at your destination! HOORAY!! Glad to know this has worked out. I’ll be praying for you on 10/30 & will look forward to hearing how surgery went & how recovery is going when you feel like posting the info.

Thanks! Will make a note of it…

Wow D907
Congratulations on your progression to getting some relief! So sorry you have been previously diagnosed incorrectly! Not a good thing to be on medications for something that you don’t even have - CRAZY! Along with so many others of us, I will be eagerly awaiting your posts after your surgery!