The current “style” of tinnitus is mostly like white noise, similar to high pressure watering hose or old dialup modem’s hissing, but the pitch is much higher. Closer to 8 KHz. Sometimes pulsating in loudness and pitch. Can get loud enough to stay near the street full of traffic and still be possible to hear it, as it’s pitch is different. Hardly noticeable if running water into the bathtube, as that totally masks it.

Just noticed that I might have a very small artery going through my styloid process which maybe is causing that hissing noise, as the styloid process bone conducts it almost straight into the inner ear. 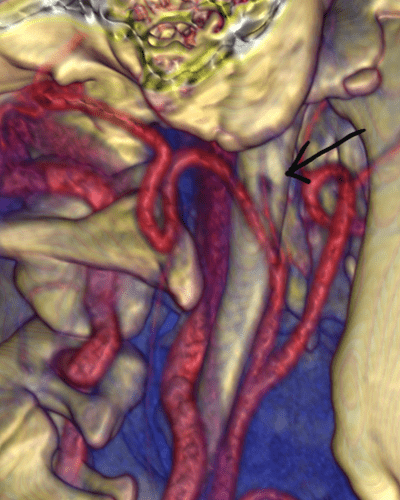 oh wow, that’s a nicely detailed CT. My tinnitus on my right side is whooshing with my heart beat and occasionally it can be very loud when I feel more pressure in my head. It’s so loud sometimes that I have to turn my head in order to listen with my left ear. I notice it more at night in bed but it could be because everything is quiet. I have tested turning my head and listening for it, and the sound is definitely related to position. An ENT did check it out in 2018, I had a CT of the ear, but he didn’t find the issue. I’d say it’s been progressing for about 10-12 years.

I do have 2 types of tinnitus. The regular constant hissing one which I think is related to my SNHL hearing loss presumed to stem from blood supply disruption caused by IJVS. The other one is pulsatile intermittent tinnitus which is vascular in nature and is induced by compressed Jugular Vein or Dilated Collateral vein (In my case Condylar Veins, lateral & posterior). The other name for pulsatile tinnitus is bruit so I hear bruit intermittently.

I dont know if you would consider this tinnitus, but I have constant static cracking sounds in my ears. Whenever I open my mouth they crack and it sounds like when you open a bag of chips. Is this tinnitus? I am not sure because I’ve always heard it has to be like “ringing”

@hyperichard could it be a type of TMJD?..
Sorry, I must have been a bit more specific. The cracking sound when opening the mouth sounds like TMJD. The constant static in your ears is most likely tinnitus.

Yes. My tinnitus came on slowly and is present all the time now. Sometimes it’s louder, sometimes quieter. It sounds like I’ve got a gas leak in my head along with a high pitch.

Really hope it disappears after surgery

I had the pulsatille tinnitus- whooshing with heart beat which sounded like when they listen to the baby in a pregnant mum. I rarely get it now. (There is a site called whooshers.com for support/ info) I get a noise like in the good old days when the channels went off air on the TV, it grows to a high pitched peak & then stops!
Hope yours goes with surgery…

My tinnitus is not a whooshing sound, but instead very loud snapping sounds that go off in my ear (it sounds like firecrackers) and it is most noticeable when I lay down at night. I am always trying to unplug my left ear…which is the only side I have ES pain on. I also have palatal movement and clicking. I have just learned about Tensor Tympani Syndrome and I will definitely be mentioning this to my ENT. Does anybody else deal with this type of tinnitus? Has anything helped you?

@Eagle1 I sometimes get this “firecracker” type of sound when my eardrums feel “dry”. Btw it’s interesting you mentioned Tensor Tympani Syndrome. I am able to consciously activate some muscles inside my ear (most likely the Tensor Tympani) and make it feel as if the eardrum is “trembling”. People say it’s quite common but not everyone is able to do that (https://www.reddit.com/r/todayilearned/comments/7mqpiz/til_that_some_people_can_voluntarily_control_the/).
I wouldn’t be surprised if that contributes to my hearing loss and tinnitus too.
By the way, check this link: Tensor tympani and stapedius myoclonus
Section “Another middle ear tinnitus – stapedius myoclonus syndrome.” has an audio example of what the clicking sound is like and describes possible treatment options (they aren’t great though - to cut the muscle or inject botox).

There is also palatal myoclonus (Palatal Myoclonus - an overview | ScienceDirect Topics) which one of our younger members suffered as an ES symptom. His PM went away after he had his styloids removed.

I’ve had tinnitus for as long as I can remember i.e childhood. After a head injury in 2015, the tinnitus in my ear changed from the type of sound Jules described coming from an old TV, as it turned on or off, which I guess is a mid range to high pitched white noise sound. The new tinnitus in my left ear was a roaring sound (think ear against a busy street w/ a high pitched overtone. It was so loud it scrambled my brain & I couldn’t think. My ear would also feel plugged when this was going on. After a few days to a week of this, I would get “high functioning” vertigo for a day (it didn’t impact my ability to be productive) then the vertigo & tinnitus would leave for a while till the cycle resumed. I was diagnosed w/ Meniére’s Disease & ultimately Rxed Prednisone & a diuretic to help calm the symptoms when they arose. This med combo was really helpful for a couple of years. In Jan of 2018, I had a tinnitus episode that lasted for a month & even after massive amounts of Prednisone & elevated diuretic use, a cortisone shot through my eardrum into my inner ear, the symptoms continued. My hearing was going south fast so I elected to have surgery to have an endolymphatic drain tube placed. That saved my hearing to some extent but has forever changed the way I hear in that ear. My tinnitus has also changed to a constant mid-range white noise sound w/ an occasional electrical cracking sound (usually when I first wake up in the morning). It is fairly loud all the time but as you noted @vdm, if the background noise is adequate or at the righ pitch, I don’t notice it.

Thank you so much Isaiah! I definitely do have Palatal Myoclonus as others can watch and listen to my palate move. After reading about the muscles that are involved in Tensor Tympani Syndrome, I realize that these muscles are connected to my middle ear muscles. I am so glad to find this connection and will definitely be mentioning it to Dr. Hepworth next time I see him.

I had Botox placed in my palate last year to try and stop the movement before I knew that I had ES. It gives me hope that maybe removing my left side will alleviate these symptoms for good.

Thank you so much for sharing these articles with me! You have helped me better understand the connection between the palate muscles and inner ear muscles that is causing me a great amount of pain, pressure and distress. I am hopeful that having the left styloid removed may help these symptoms. I will definitely be mentioning it to Dr. Hepworth when I see him next.

My tinnitus started as a high pitched constant sound on the right that was faint and would come and go. It was most noticeable when laying down or upon waking in the morning. but could happen at other times too. It would be present sometimes and absent at other times. It was never pulsating or whooshing. After my surgery I have noticed it is louder than before. I’m hoping that it will heal up and disappear with time. I’ve also noticed that after surgery with loud external noises my right ear will make a fluid shifting noise with sensation (sometimes painfully) and this has still not resolved (I’m seeing an audiologist soon), but this may be unrelated to the increase in tinnitus. Other noises that I don’t think are tinnitus is the loud neck popping when I move my head (degenerative disc disease in my cervical spine was confirmed on imaging, so I attribute this noise to that.) Prior to surgery I would also often be able to hear my heart beat if I concentrated on it, but I’ve noticed that I don’t hear this anymore. One other very strange hearing thing that happened on waking only one time was that I could hear my eyelashes blinking. It was not tinnitus but I wanted to mention it because it wasn’t the usual eyelashes rubbing on the pillow sound but literally I could hear every hair touching every hair. Strangest thing ever, but that is why they checked me with specialized CT for Superior canal dehiscence - which was before ES was discovered and which was negative, so I’ve often wondered how or if ES was related in this truly bizzare incident. Has anyone else had these odd things happen?

Hearing your eyelashes when you blinked is definitely an unusual thing & could be a rare ES instance of hyperacusis.
My bizarre symptom was periodically having the roof of my mouth along my upper right gum line feel like I’d just poured scalding water on it & like the skin would start peeling off any minute. This feeling would last an hour or so then go away. It was intermittent but stopped after my right styloid was removed.

I’d have said hearing your eye lashes would be SCDS, so good that it’s been ruled out, we’ve had a couple of members with both…

I keep forgetting about SCDS. Need to read up on it!!

@Dizzylady - I don’t hear eyelashes touching each other (not that many left perhaps), but… when it’s quiet, I can hear my eyelids separating when opening the eyes. I thought it’s because of my constantly slightly dry eyes!!
Was that an ENT who sent you for that specialised CT scan?..

Yikes! That sounds absolutely awful. So glad that has gone away

Wow, that’s wild about your eyelids VDM. The eyelashes thing only happened to me one time - hopefully just a freak incident. Anyhow, to answer your question, it was a neurologist that ordered the CT for SCDS. Many of the symptoms of SCDS overlapped with ES, including ear pain and pressure, dizziness, tinnitus, brain fog, etc. and some patients are also bilateral, which is why he thought of it after hearing my story. Unfortunately he’d not heard of ES or the jugular vascular form so this didn’t enter his differential. Glad I eventually got an answer though!