Here is my panoramic from 2 years ago when I first started having symptoms.

Can anyone tell me what they see?

Unfortunately, the new panoramic of my mouth is zoomed in and only a hard copy.

An ENT in Boston (my brother's close friend) just took a look at this panoramic and said the following:

"Lou sent me your panorex which shows bilateral stylohyoid calcification. Your symptoms, however are much more typical of laryngopharyngeal reflux and bruxism. Eagle 's syndrome causes lancinating throat pain when swallowing. It is a difficult diagnosis to make, as calcified stylohyoid ligaments are reasonably common and true Eagle's syndrome is rare. The surgery can be risky, so I always inject the glossopharyngeal nerve with a long acting anesthetic such as Marcaine prior to considering surgery. If the pain goes away, I resect the styloid. In your case, your symptoms don't really fit classic Eagle's, so I would be cautious about potentially morbid surgery and would seek a second opinion. I would be happy to see you on your next trip up to Boston.
I would make sure you sleep elevated for 3 months to treat potential LPR before considering surgery. You can look up laryngopharyngeal reflux. The popping in the mouth and throat is quite typical.
I am on a cruise ship about to go into Cuban waters, and will be incommunicado for a few days."

Here are the symptoms I listed for him:

I think the one missing symptom that I truly don't have is real pain in the throat. I have neck pain but more neck constriction. I also have a herniated C5-6 from 2 whip-lash accidents.

I have never had pain in my throat , nor have I ever had trouble swallowing, or the whole foreign body sensation deal.

JCW-thanks for the posting. but I can't see it. But I couldn't see it mine until I had it done by looking to the left and right and got 2 views. Turn your head a little to the right do it and then a little to the left and do it. When I did it straight on both sides were out of range. The oral surgeon told me I taught him something about this by doing it this way.

In 1998 an ENT injected the G.P. Nerve with zylocain and my pain went away for 6 months-but no one would do it again. I was sad. That injection is also noted somewhere as a test for ES-pressure on the nerve.

every surgery is risky...I got that to but what is the alternative. Just have pain forever? I had this for 15 years and was thinking of just surviving with it until I died--but for 30 more years? Plus waiting was becoming a non-option to me because in my mom's assisted living home people in their 60's were having surgery and dying on the table so I decided to have it done while still the youngest I could be to make recovery the best it could be.

For an x-ray I had one set done called a mastoid series and it was right there. I also had a straight-on x-ray in the mouth that showed it. Then you become a topic of conversation since "They have never seen that before". I'm a circus act.

I had all your symptoms and many whiplashes and head injuries and car accidents so anything could have originally broken the styloid off. One symptom I had was if I turned my head just right the tip of the styloid would get caught on something and snap back when it released-like snapping a rubber band and people could hear it. Also the reflux is caused by the Styloid-it caused me to be in a regular state of inducing vomiting so acid kept coming up.

We need to be reminded that ES causes all sorts of symptoms in each of us differently. LIke my doctor said remove it and see what symptoms are left. None actually so see! nah nah!

As my closest friends here say, I don't really hate to be sarcastic so tell them take it out fools. Sleeping with pillows, etc. just delay the inevitable surgery and increase the chance of permanent nerve damage and damage to the issues in the area. If the ligaments are calcified they are useless too so take them out--the connecting point is being removed anyway. A pain management doctor familiar with ES told me that and was my recommendation to get this handled now.

Don't delay do it today. We are at a disadvantage--I read once that 4% of the population has this but only 4% of those have symptoms--so we are the special ones. But out of 1000 people only 2 have symptoms and might not be servere. I only got worried when I once read that a man with no symptoms fond out he had it when it punctured his carotid artery causing an eschemic stroke. Spelling again.

Have a great trip-it sound like a great time to rest.

OK I think I see it on the left. it's good shot. Anything that size in a place that tight is to be removed. A non-medical opinion. But as I've said if I were a surgeon I'd remove it myself if you don't/can't/won't. silly me.

oh as I always ask----can you feel it yourself? Both of mine were very easy to palpate with the fore finger of the hand on the same side-just curl your finger and GENTLY feel up and back into the tender area. It's really not hard to diagnose--you got it--its just hard to get someone to remove it--why.

Oh yes I was told once it was not life threatening. It is lifestyle threatening and living here in Beverly Hills, if they can operate to give someone a new face, lips, nose, etc as a choice then they can do surgery to increase the possibility to relieve pain. Unless their face hurts the public.

It would be great if someone to a picture of themselves (selfy!) touching the spot that you are describing - I am really not sure where to start. Thanks everyone for your comments. Really appreciate all the feedback and personal background.

oh as I always ask----can you feel it yourself? Both of mine were very easy to palpate with the fore finger of the hand on the same side-just curl your finger and GENTLY feel up and back into the tender area. It’s really not hard to diagnose–you got it–its just hard to get someone to remove it–why.

Oh yes I was told once it was not life threatening. It is lifestyle threatening and living here in Beverly Hills, if they can operate to give someone a new face, lips, nose, etc as a choice then they can do surgery to increase the possibility to relieve pain. Unless their face hurts the public.

I am NOT a doctor, but on your panoramic X-ray, I have indicated where your styloid bones are. See attachment. They definitely look elongated to me. You should have them measured.

I hope this helps.

That's what I saw too. I pulled my panorex out and they look the same. feel up where your tonsils are or would be. its was easy for me to find because it is so tender there so don't go grouping around. I came out of doctors offices feeling worse because they poked around so hard and could feel anything. I felt like they were going to push then through my head. I'd take a pic but can't get camera in my mouth. In the space between jaw and pharynx, above and behind back teeth.

A good clue as to a good doctor is how they palpate them. 2 doctors last year reached in from behind with a curved forefinger and just touched the tip-no digging or probing--they knew right where to feel--that was a good sign and they acknowledged that they could feel them. And then took my left one out on sept 11.

Take a look at the pictures in the article link listed below. The picture on the third page indicates the location of the styloid bones in the mouth.

How cool is that! The oral surgeon pointed with his finger to some place but I was in such shock and he was such a fast talker that I left his office thinking - what the heck was he talking about!
Thanks for literally pointing it out! My family is so sick of hearing me talk about ES and it is so great to have real peeps like you that care and understand. Your input is so great!!

I am NOT a doctor, but on your panoramic X-ray, I have indicated where your styloid bones are. See attachment. They definitely look elongated to me. You should have them measured.

I hope this helps.

I feel your pain JCW. My quote is " Everyone that you love cares that you are in pain, but within a couple months, everyone you love no longer wants to hear that your in pain" .... That is why, I too, am glad I found this site.

Its true but F them then. I listened to so many people gripe about their pains. carpel tunnel syndrome, spinal fusions, monthly menstrual stuff sciatica, etc.and I have this and they all go away saying they have to take care of themselves now. greedy little bastoids. I thought it was a 2 way street. Now we get down to it! people make pain worse--some not all-ive had great support but I think its over-every structure is gone from my neck. finally a chance to heal.

Hi JCW, you mentioned that you have “pop rocks” feeling in your mouth, that’s how I explained one of these strange symptoms once… Anyhow, do you have pain or burning in the tongue at back on sides or anything like that? Thanks

I've only had the pop-rock feeling for the last week or two. It might very well be acid reflux. I don't have any pain or burning with that. 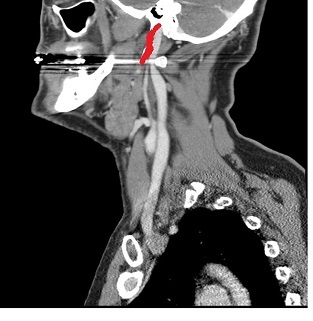 this is my pre op scan enhanced by me.

Wow! That's pretty crazy looking. What is the white horizontal coming out of your jaw that looks like a golf peg? Sorry to sound so ignorant!

Shaw, what kind of scan is that? Curious!

Had to leave radiologist today without getting the 3-d cat scan. Doctor order Maximo facial and radiologist said the script needed to say neck. They had to post pone because I need a new pre-authorization number from insurance company. Does this sound right? Scan of neck starts around cheeks I guess. Just want to make sure I’m radiated for the right test! Upsetting but I was. Ok with waiting. Better than having the wrong parts scanned!

that's one slice of my ct of skull.

Shaw, what kind of scan is that? Curious!