Anyone else with their external carotid stuck behind the styloid? 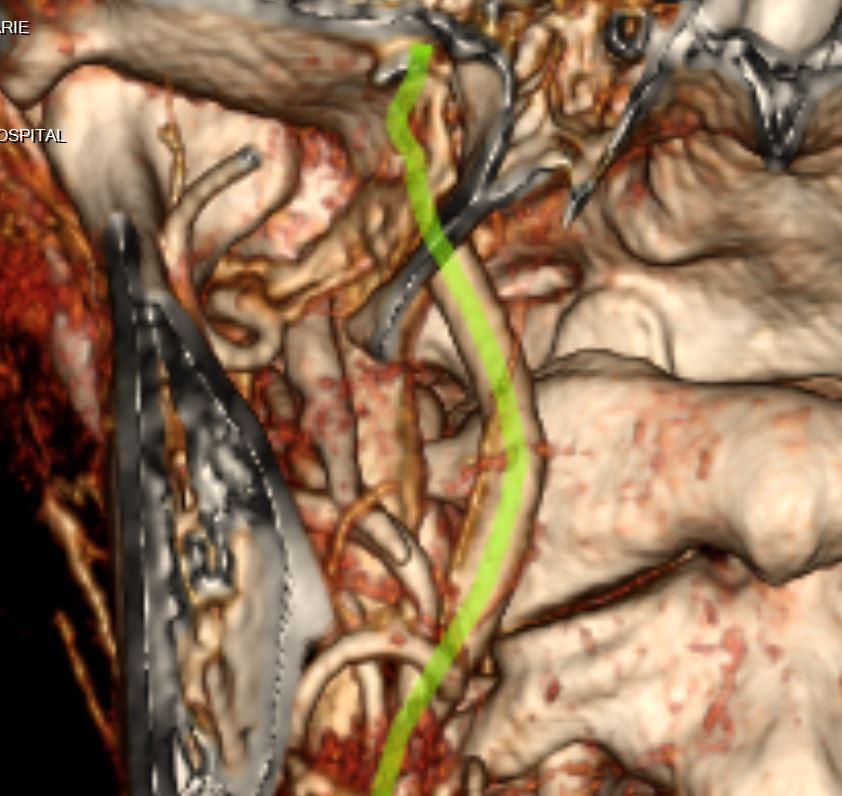 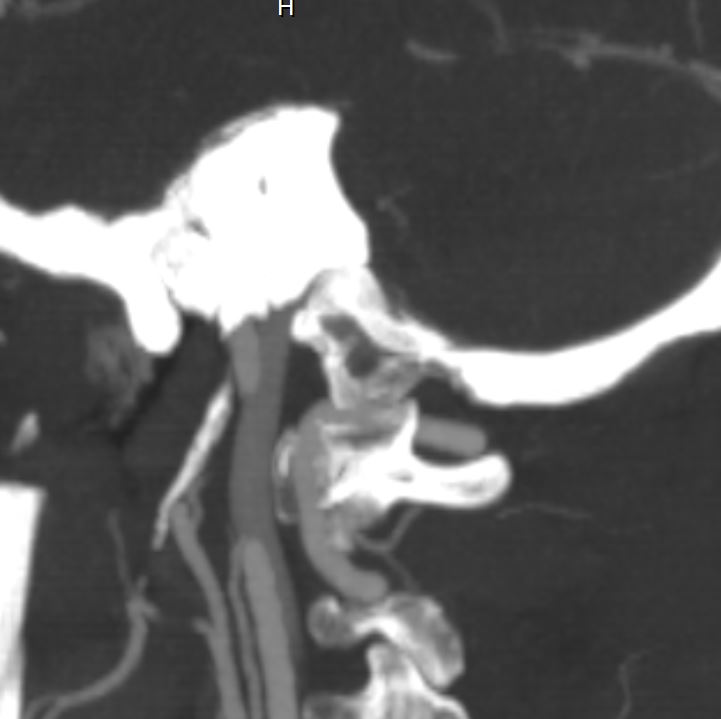 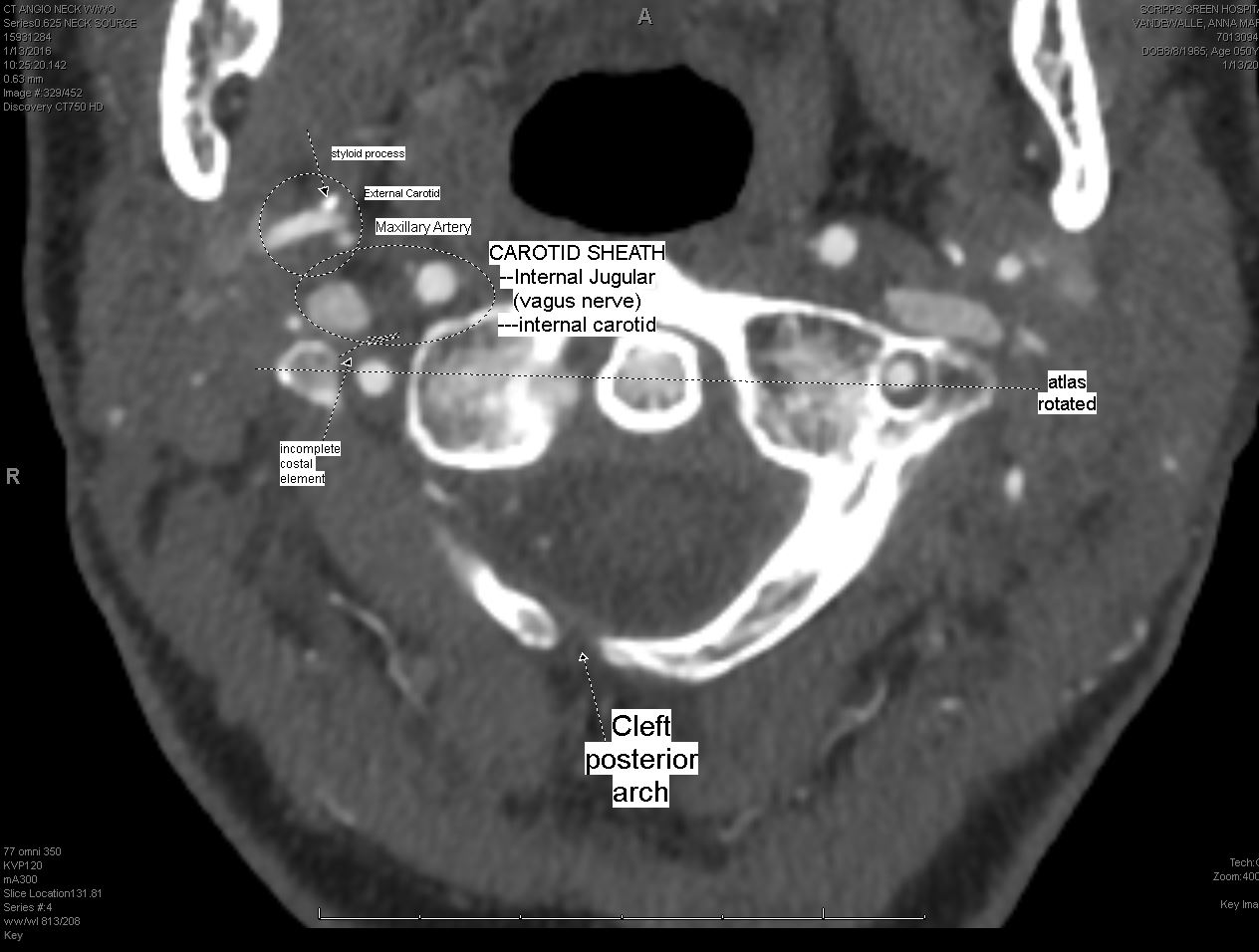 Looking forward to styloidectomy in June with Dr. Samji. At the initial consultation he said of the three varieties of the way the elongated styloid presents mine is the most difficult. Lucky me! I suspect since part of the atlas is missing the spinalis muscles can’t pull it off the styloid. Compound that with EDS and a car crash. Hoping removal of this brings relief.
The styloid is supposed to come between the external and internal carotids. Here, the two branches of the external carotid are stuck behind the styloid (maxillary and superficial temporal arteries) Did anyone else here have this? If so, what were your signs and symptoms?

Very interesting situation, julianeagle. I learned something from your post about different presentations of ES. Makes sense though. My glossopharyngeal nerve was wrapped around my right styloid like a vine which made shortening it more challenging. Dr. Samji did my surgeries & I know he’s always up for a challenge. He is an AWESOME surgeon.

There are quite a number of people who’ve had carotid artery compression resulting from pressure from elongated styloids or calcified s-h ligaments, but since you’ve stated your condition is rare, I suspect it’s the internal carotid that’s been the problem for most of them. It’s always “fun” to be the rare case but a bit scary at the same time.

What are your symptoms out of curiosity?

Whenever I eat, flex my head, sometimes going to the bathroom–I lose vision in my right eye (like looking through a fishbowl). Pain around right eye and ear down the back of my neck, then down to where my appendix was, which swells up, too. My right arm turns blue and cold. Only left side sign is left nostril flows lots of clear fluid (NOT CSF, we tested) and sometimes lose vision left eye too so no more driving for now. Horrible buzzing tinnitus. Bizarre, I know, but it’s been consistent and reproducible for the doctors. If I relax and my husband pulls gentle traction it gets temporarily better; the right lower quadrant swelling immediately goes down (the doctors love seeing that little parlor trick). Voice gets hoarse, feel tugging and foreign body sensation behind and below right ear

Those are some pretty spectacular symptoms! I bet you’ll notice a BIG difference after surgery. If your carotids have been compressed for some time, it may take awhile for them to “spring” back. It does take a couple of months post op for your body to return to normal, but often the most severe symptoms are improved immediately after surgery.
Glad your nasal drainage isn’t CSF! That would certainly be more cause for concern.
Your surgery date is on the calendar. It’ll be here before you know it!

Those are some impressive CT images & impressive symptoms- I’m sure it’s not great having doctors poke & prod you about, but you’ve certainly done your bit in banging the ES drum & educating them!!
I don’t recall anyone getting CTs showing that, & the detailed report like that, but often CTs aren’t interpreted as well as yours have been. We have had lots of members with carotid or jugular vein compression, & wacky symptoms, but they’ve not always been believed…
I’m really pleased that you’re having surgery with such an experienced surgeon!
Lots of info about what to expect from surgery in the Newbies Guide & by searching the discussions to prepare you.

my internal carotid also runs behind my styloids.

If I move my head hard in certain directions, I get horrible head pain and visual disturbances.

It appears both internal/external pass behind my styloids.

I would be very interested in seeing your imaging if you are willing and able to post them, and thanks for responding!

Less than a month until surgery with Dr. Samji (June 18th). This HAS to help.
The out-of-network approval process though Scripps meant the group ENT had to make the referral. That was Dr. Gaylis, someone who is mentioned as familiar with Eagles on this site.
We have met some real angels, and some people who shouldn’t be in healthcare at all, through this 8 year journey. Dr. Gaylis is solidly in the ‘angels’ column. On our first visit, we had him pull up the 3D CT reconstruction. He asked us ‘What am I looking at?’ and really listened. He felt the tip of the styloid in the back of my mouth.
Before pursuing surgery he wanted me to move forward with some nerve blocks already ordered by another doctor, then wanted to see me again. The nerve blocks only made things worse but in that time we had our consult with Dr. Samji. Dr. Samji said I was a candidate for surgery, but as I mentioned before it was a complex case since my right styloid is ‘hooked’ and compressing the external carotid branches anteriorly.
So the last pre-op hurdle meant going back to the local ENT, who has done two styloidectomies, to convince him we wanted to go out of group to the guy who has done more than 200.
Dr. Gaylis sat down, listened to how the blocks went, then read everything Dr. Samji had written. He then re-evaluated me and felt the tip of the styloid again.
He said he thinks it’s a good idea to have Dr. Samji do the surgery and he would put in the order. We know the process–it will get denied most likely, appealed, then approved, but that’s just busywork (designed, I think, to discourage malingerers).
Dr. Gaylis didn’t just pencil whip the approval. He took the time to re-look at me, read everything Dr. Samji had written, and help us with a difficult decision. There was no ego or arrogance in turning the surgical intervention over to someone else.
He asked us to please keep him informed how the surgery went, and to follow up with him afterwards.

He does indeed sound like a very good doctor- & like you say, his pride didn’t come into it, luckily!
I really hope that you get the insurance approved & that surgery goes well for you. Best wishes!

That is a wonderful story! So glad you found a compassionate doctor who actually listened to you & cared enough to promote what is in your best interest!

I hope you feel the days pass quickly prior to surgery. 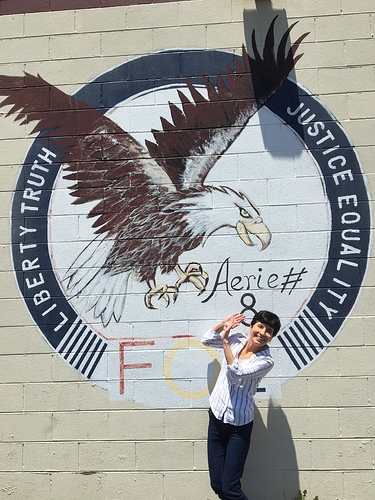 Hope that it all goes well, thinking of you! God Bless…

She’s passed out asleep now. Dr. Samji said it was a difficult case because her styloid was long, pointed, and took a sharp turn. It was pretty tangled up in things. He took it out in little pieces all the way to the base, so he got the whole thing. No EMG changes throughout though she may have some slight right sided tongue weakness since the hypoglossal nerve was so impacted. No facial droop or shoulder weakness. She was ecstatic all the way back to the rental we got here in Willow Glen–her vision remained crystal clear the whole ride. Her blurred vision was always the first thing to come and last to go, and more than anything else made normal function difficult. Dr Samji said real improvement will take 6 weeks. He and his staff and the surgery center were all excellent.
Our provider wanted us to go to a ENT surgeon with no history that we could find, of performing styloidectomies. I wasn’t about to let her suffer anymore while we fought it—we paid cash and went to one of the best. It was the right decision. This doesn’t bother me much. It wasn’t that expensive, and our provider has spent quite a bit over the years to get us to this point.

So pleased that she’s seen improvements already, that’s really good news. & you’re great for taking care of her so well! Hugs to you both!

Day 3. Today is supposed to be one of the tough recovery days. She woke up this morning feeling like her throat was closing but that passed. Her vision remains clear and all her signs and symptoms seem to be gone. Her right hand has felt slightly cold but hasn’t turned purple like before. There is NO facial droop, tongue weakness, etc. Lots of swelling and her jaw is getting stiff. Hoarse voice which she feels is due more to swelling than nerves.
She has done great managing her pain—1/2 a percocet every three hours has been sufficient. (She’s pretty small so a full tablet might be too much. This reduction was with Dr. Samji’s approval)
Cautiously optimistic. When she went under general for the appendectomy a few years ago (part of her signs/symptoms has always included pain and swelling over her appendix, so we hoped removing it might take care of everything) her symptoms disappeared for 24 hours, probably due to the heavy medicine cocktail they give for general anesthesia. So, we didn’t want to get our hopes up yet again. But here we are day 3 and she’s gone through all the normal ‘triggers’ and no blurred vision, leaking nostril, tinnitus, blue hand, pain around the ear.
Dr. Samji was pretty clear, don’t expect improvement for six weeks. So even if there’s a set back as things drain and tighten we’ll remain optimistic.
The way Dr. Samji described the surgery and what he had to do to remove the entire styloid, we are SO glad we paid cash to come here instead of having a fully covered but less experienced surgeon do this. She misses the kids, home, her garden and her dog, and travelling for medical reasons certainly has its challenges, but this was well worth it.
The little cottage we rented is in a very nice neighborhood so getting out to walk has been a treat. She made it all the way around the block yesterday with a few rests. Some standing stretches and we’ll take the prescibed walk

Fingers crossed for you both then, glad that things are still seeing improvements… sounds like a good decision to see Dr Samji, & hopefully you’ll be home soon!

So fantastic to hear this amazing report. I’m hoping & praying all the pre-op symptoms are gone for good!

Ughhhh…this devil ES is horrible! I didn’t go through all of these issues. I did suffer for 17 yrs! I prayed and prayed that Yah would just take me. Pain is hard and with ES, it is a silent pain and no one knows how we suffer in silence. It took me at least 4-5 months to even feel normal. I still had fear anytime I felt something or did not know what was going on in my throat, after the surgery. Take it one day at a time. You’ve had the surgery and you got a diagnosis. I had neither for 17 yrs. I had just had a baby on Dec. 8, 1987 so. The onset of ES happened on Dec. 24, 1987 so, guess what I was told??? I was going through postpartum depression…Really??? Well, by the time I got diagnosed, the baby was about 12 yrs. old! I had to move to OKC and 3 yrs. later…I was diagnosed at OU Medical Physicians by Dr. Greg Krempl. I am so glad I moved but, it was tough going through the surgery so, hang in there and pray to our Heavenly Father.