Yes I had pulsatile tinnitus, but not all of the time. I did have tinnitus all of the time. I also had two things going on in my neck. In Nov. 2021 I had surgery for severe foraminal stenosis, pinched spine cord, herniated disk, and no use of left arm(which I woke up with). They replaced C4-7 and had a plate and screws installed. After that I could not breathe when I bent down. I knew I had ES for 8 years, but I could deal with the pains. They think that the spine was adjusted enough that the styloid was pressing my carotid. I took 6 months for someone to listen to me and I had surgery in May. The right side was removed and it was 8.2 cm (measurement in pic). I am still having some symptoms, but some symptoms are better. I am not getting dizzy and can breathe now. Poking in neck, jaw and teeth pain, shoulder pain on that side, headaches with vision problems, coughing all of the time, sleep apnea is better, and no pulsatile tinnitus, are all gone. I am still recovering from surgery and hope more improves. 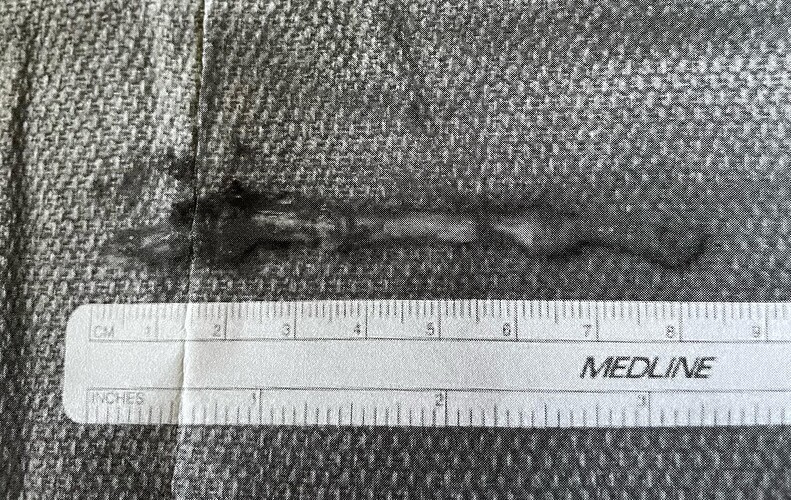 Great that you’re seeing improvements, no wonder, that styloid is huge! Will keep praying for your remaining symptoms to ease

I had bilateral jugular compression & had pulsatile tinnitus, as Isaiah says it is quite common. Mine wasn’t all the time, but whenever head pressure increased- heat, exercise, walking upstairs even, laying down too. Sleeping propped up can help with the head pressure if you don’t already. Mine is almost gone since surgery. Hope that you can get help soon!

@Cody - WOW! That’s a monster styloid! So glad you’re already noting positive improvement w/ it gone! You’ll likely notice even more symptoms disappear over time once the other side is removed as well. My symptoms were worse on the second side I had removed but my surgeon decided to remove the less symptomatic side first because of how thick & straight it was. Had some good symptoms relief when it was gone, but ultimately, it was the second surgery that really helped me recovery from my worst ES symptoms.

I just want to make sure I understand your post. You had pulsatile tinnitus and tinnitus?

yes. I have had tinnitus for about 40 years and pulsatile tinnitus when the carotid was compressed.

What did your regular tinnitus sound like? How did it start?

It is ringing in the ears. Sometime louder than others. When the compression was , it was the heartbeat in the ears also. And roaming and not hearing full sounds.