This is an interesting case of Bilateral Jugular Vein Occlusion/Stenosis which caused the Collateral Veins to swell as the blood was rerouted to them by IJVs and as result compress the spinal cord causing a progressing quadriparesis (all limb weakness). The 36 year old in this case has been suffering from hydrocephalus prior to the onset of cervical myelopathy (spinal cord compression).

An interesting bypass operation of the occluded segments of the IJVs was done to reroute the drainage from Sigmoid Sinus to area below the blockage of the Jugular Vein. This was done to relieve the pressure on the swelled Collateral Veins (Epidural Veins as it is referred in the study).

So you know now why you have stiffness & weakness on arms and legs and sometimes the whole body.

Here is the takeaway from this study.

2 - Since IJVs tend to collapse when upright, this study has shown that Collaterals can’t drain all the blood without causing a damage to the spinal cord when there is a total occlusion of the IJVs hence the role of IJVs even when standing is significant. Meaning it helps the collaterals drain some blood when upright. 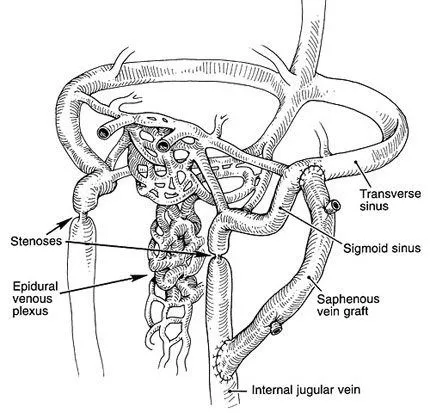 Thanks- another interesting paper, not sure if it’s just me but I couldn’t find any mention of what was causing the stenosis?

@Jules You are right. It is not just you. it just says it is occluded without mentioning the cause. I had a lot of muscle stiffness and weakness on the right side. So was wondering if this was related to IJVs so this links it.

So regardless of the cause of the occlusion/severe stenosis, I wanted to know if collateral flow due to IJVs is somehow implicated in causing venous hypertension/compression on the spinal cord. That can only explain why so many of us with IJVs have upper and lower extremity muscle stiffness/weakness which is intermittent related to IJVs.

@KoolDude I remember from reading Dr Axons report you posted that the jugular vein compression was causing brain slumping and distortion of the brainstem. Any form of brainstem distortion/compression can cause full body symptoms. And having the collaterals overwhelmed and causing further impact to the spinal cord explains why symptoms are so severe.

@Dontgiveup yes if have brain herniation due to CSF leak or as they call it in that Axon’s study -spontaneous hypotension - you can have many more symptoms but I think this case showed that if you have severely occluded IJVs, collateral veins will swell as they try to reroute blood and in the process cause congestion (venous hypertension) and/or compression on the spinal cord which can manifest as weakness/stiffness/numbness etc. Similar to that 17 year old girl in the video you & I talked about the other day. As matter of fact the 36 year old in this study suffered from the same symptoms as her.

I believe the degree to how much the spinal cord is affected is proportional to the severity of IJVS. The Severely compressed ones will reroute more blood to collaterals hence the impact to the spinal cord.

Or does the vasculature remain and still cause problems?

Interesting, I have had off and on weakness in my legs when standing up. I was worried that my old herniated disc was having issues again but it’s a feeling I get in both legs. It dissipates after a few seconds.

@Dontgiveup The simple answer is YES. The expectation is that normal drainage through the Jugular Vein will be restored and collaterally won’t have to reroute blood as much and will shrink back to their normal size. So it is clear that the volume of blood that Jugular Vein drains is much bigger than what the Collaterals are designed to drain so while they can help, they can get overwhelmed when the IJVs are impaired as result, they can compromise blood flow to the spinal cord or can compress it so returning blood flow to IJV will definitely take the pressure off of them.

Here is my 3D rendered CT Scan of the Neck. You can see the “Blue Arrow” that is pointing to dilated collateral Vein on the left side where the compression to my left IJV is extreme. I expect it to shrink back to normal size after it is removed. 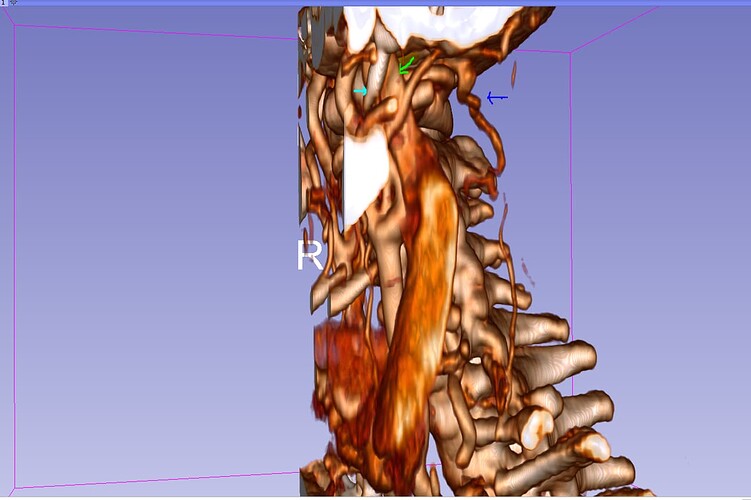 Remember that Higgins & Axon study, if you look at the axial images of the patient, you can see that collaterals are dilated/thicker before surgery (A) and the collaterals shrunk to a normal size after the first surgery (B) and went back almost to a normal level after the second surgery (C). 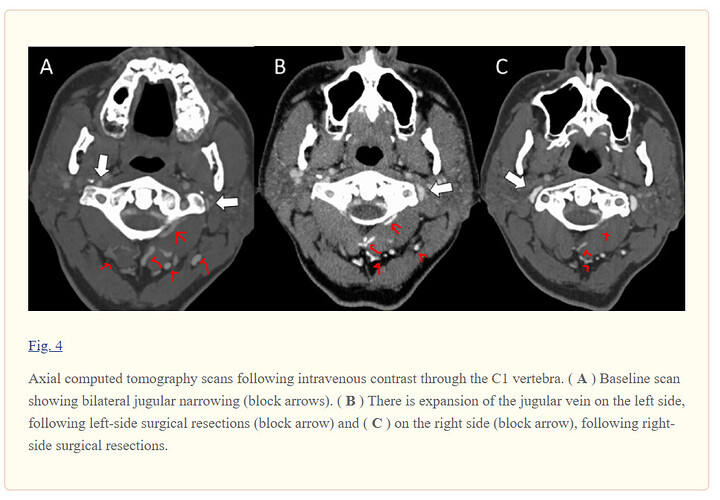 Given the jugular compression and the amount of suffering I feel, I can only assume it’s not great.

Can you tell whether the collaterals are dilated? 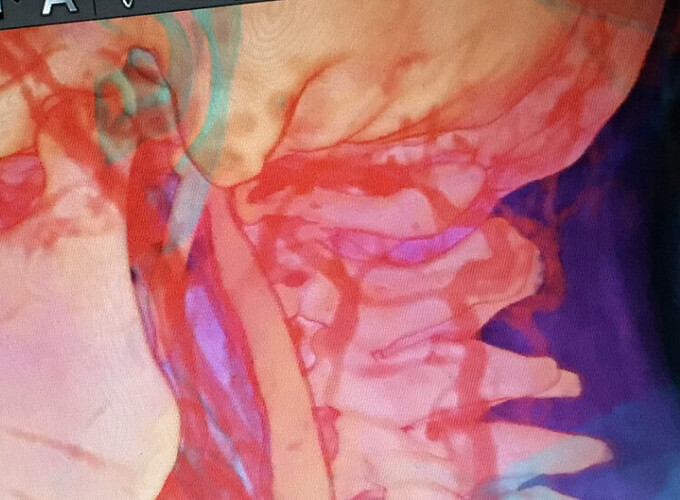 @Dontgiveup Well the picture you provided is not very clear as the rendering you chose is too transparent but I can see it dilated (white arrow). Not clear enough to distinguish from the other vessels however it appears to be dilated. 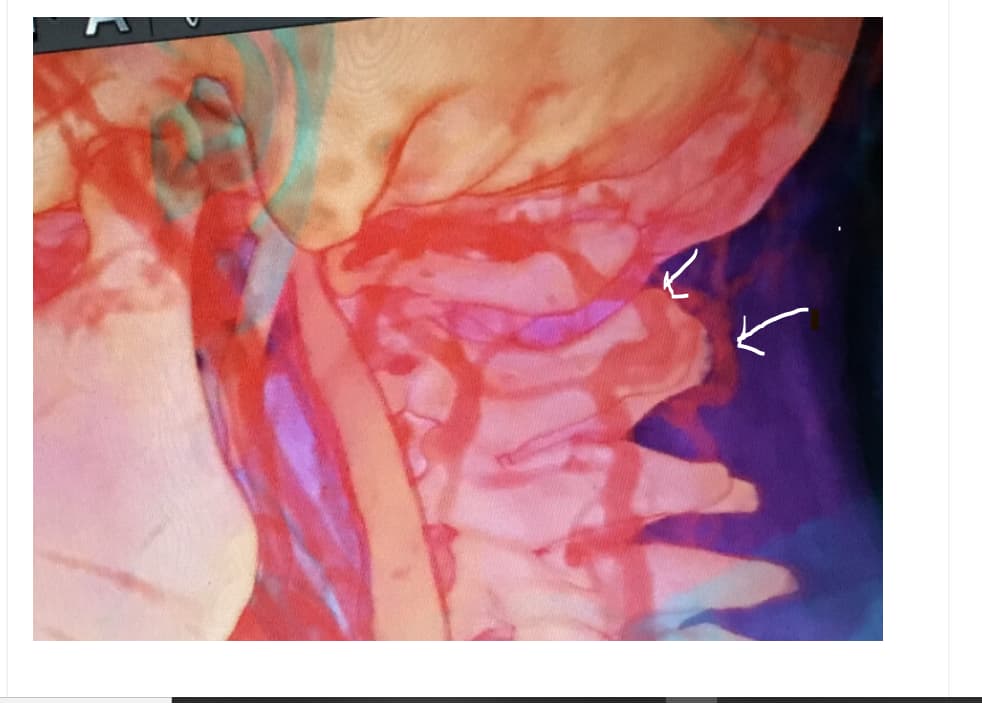 @KoolDude sorry about that. That’s the only image I have on my phone that faintly shows the collateral veins. Thanks for your insight. Appreciated as always.

@KoolDude , was it CTA or CTV scan? If CTV, how did you manage to convince/educate the docs/hospital to do the proper timings and get the veins visible (probably it’s a simple thing outside of the country, but here…)?

@vdm, it was not CTV but a normal contrast CT scan of the head & Neck. I think you can call it CTA since that stands for CT Angiography. The thing with contrast is that all the Vessels are visible as the contrast travels through them. So it is easier to identify if you know the veins and arteries which is which.

Ironically, that CT was reported unremarkable (normal) and I had to write a long email to the radiologist indicating that Dominant Jugular Vein was compressed but he declined to reply to me (I think Ego thing…how dare you question my report). This is after Carotid Ultrasound showed high speeds on IVJs. I had to take that to St. Mike’s vascular department who agree that there is something in the CT and did further investigation by conducting the Catheter Angiogram which clearly showed the degree of compression along with Collateral flow live. So yeah…it was a battle but I had to advocate myself and move on to a different doctor if one is not willing to help.

Most likely ego + some sort of insecurity… If the doctor openly admits they made a mistake, that perhaps marks the end of their career and endless lawsuits (though I am not sure how litigious Canadian folks are).

I read about the CTV (CT cerebral venography (technique) | Radiology Reference Article | Radiopaedia.org) some time ago and thought it might be a less invasive approach to scan the venous network instead of going for catheter venography, but perhaps I will need to take it anyways. I still couldn’t convince the vascular surgeon to add IJV scan to the carotid doppler US requisition, as according to him it’s too complicated to reliably assess IJVs with ultrasound. While I see his point (e.g. IJVs and jugular veins in general are very soft and easily temporarily pinched by muscles), just that alone was quite a sign that mix-and-match investigation techniques aren’t readily available to everyone. And CTV is something not that common here from what I have heard…

And of all the CTAs I have, only one managed to catch the jugulars. Others would show only the arterial flow. Or maybe it’s because the jugulars would be too compressed to show the flow… 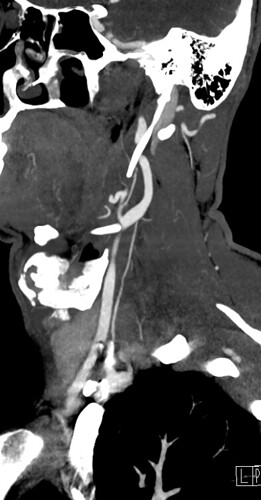 @vdm, There is what they call arterial phase and venous phase, so technically they should capture both in CTA. for CTV, they only focus on venous system. Regarding the images you shared. I assume the images are from different side i.e left & right. The first one, were you moving your head when they take it? It does show calcified ligament and hyoid bone moving towards to the carotid artery. It also shows the whole thyroid cartilage with hyoid bone moving towards left just below where the jugular vein appears narrowed (will need more images to confirm things here).

I see an obvious stenosis on the Jugular vein on second image but would like to have more images in order to study what might be causing it (muscles might be involved). Secondly, it will be good idea to provide the front & back mages as swell. Plus, if you can provide the axial images, that would be better as I can see the interaction between bones & vessels if any.

With the limited images, Here I point what I think the items of interest are. 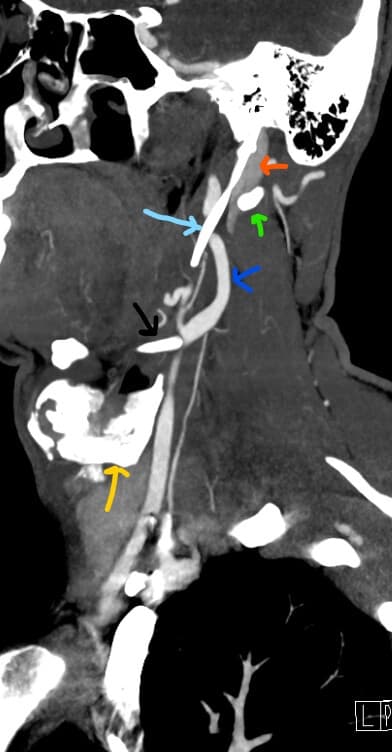 Second image, red points to Jugular vein, blue points what appears to be Carotid artery (hidden behind IJV), and the green arrows point to parts of the Collateral veins which I would like to see more since I suspect it might be dilated but need to see the back very well.

That’s just the R side images (my left side is non-dominant and barely visible at all). Re IJV stenosis, the compressed part was only between the C1 TP and the SP.

In the first picture actually it is my carotid artery and the carotid sinus being poked by the hyoid bone and thyroid cartilage, but I think I mentioned somewhere that all that area is a very dynamic realm – when I feel my arteries become pinched by hyoid/thyroid cartilage, usually it’s enough to activate some muscles to pull all the thyroid/hyoid apparatus down towards the chest and the arteries get out of there. Sometimes it’s even enough to give it a gentle massage around that area. Other CT scans (taken earlier/later, ~6-12 months apart) don’t show any arterial impingement by hyoid or thyroid cartilage.

Things have changed since these CT scans, but we can discuss that in private if you feel like.

Ok. yeah I can see the carotid artery clearly but it does appear to be close proximity to Hyoid and Thyroid cartilage. Something might be pulling towards the carotid. I also believe your Jugular Stenosis is not limited to SP & C1. Muscles might be involved (to what degree, I can’t confirm either).

I remember you mentioned that things might have changed for the better after long physiotherapy. 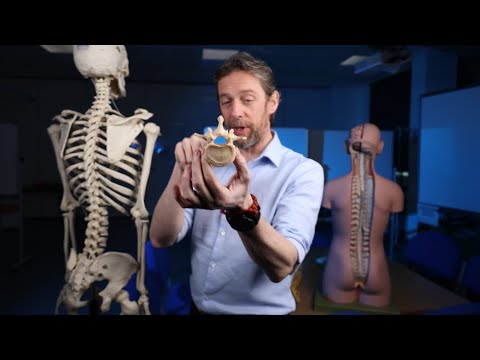 If you think of that, compression on the spinal canal (herniated disc, shifted vertebrae etc) might obstruct the vertebral venous plexus and increase demand of flow through the IJVs. In case the IJVs are obstructed (by styloid processes or something else), there might be increase in symptoms.

UPD: apparently as they are valveless veins, sometimes the blood can travel against the direction of normal flow, back into the head under the “right” circumstances…

So it might be that the real culprit isn’t the elongated styloid processes per se, but something wrong with the spine

@vdm In biology everything is possible and one thing might not explain all scenarios and if you have vertebral issues like the one explain, it is possible to impact the blood flow and negatively impact the spinal cord. However in the case of spinal cord compression with IJVS, the hypothesis is not only compression, but also venous hypertension which is also known to impact spinal cord function. As this study and the video of the 17 year old indicate, relieving the compression of the IJV does resolve at least a good portion of the symptoms related to myelopathy hence the dilated collateral vein’s role in this particular scenario.

That’s a great image and goes someway to explaining why my symptoms are worse after being upright.