The journey for answers continues. I was combing through old CTA images and found what I thought looked like internal jugular vein compressions. Any opinions? Thanks in advance! 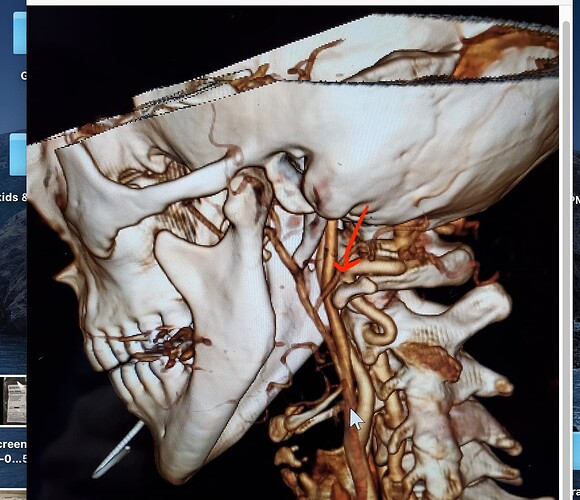 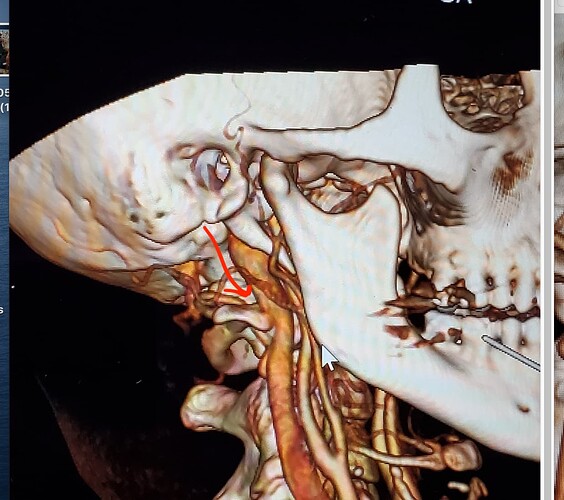 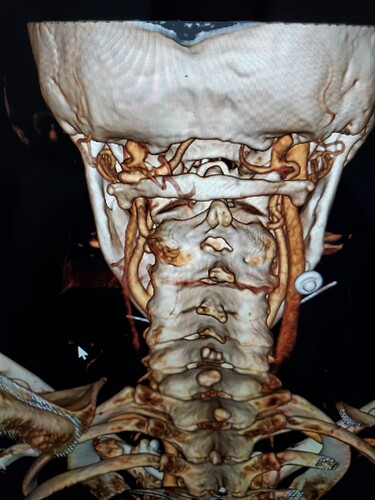 The left side looks compressed but the right looks ok to me to me. I’ll let those who are better versed in identifying IJV compression comment from their greater knowledge base.

I posted some images above that show possible C1 impingement on the IJVs. I’d be curious to know what @KoolDude and @boogs99 think (and anyone else who’d care to comment). Thanks in advance!

More physicians are starting to do venous stenting, but only a few have done it for a long time: Dr. Fargen, Dr. Patsalides, Dr. Amans, Dr Hui, and Dr. Pereira (Toronto). I’m sure there are other very qualified docs doing this well.

I met with Dr. Patsalides today. He clarified how he’d handle my case. He said his first and only goal for this procedure is to restore flow in the dominant venous sinus area where the clot is. Any IJV problems can be addressed later on, if needed. However, he did mention that IJV flow often improves after venous sinus stenting. He said there would be no venogram or manometry needed because, with the clot, stenting is needed to hold the vein open to improve venous flow. He said manometry is only needed to determine the need for a stent. He said it would be a several hour procedure because he has to carefully make a “tunnel” through or around the clot to restore flow.

He’s hoping the procedure won’t be necessary and the blood thinners will help dissolve the clot. However, he seemed confidant with the plan if things aren’t better in 2-3 weeks. I’m pretty comfortable with his plan, and he certainly has done enough of this stuff to know what he’s doing. He said CVST is very rare but he does about 10 of these surgeries a year, and has done around 300 of them. He also mentioned he’s one of very few physicians that tries to restore venous flow in a subacute CVST situation.

He said his first and only goal for this procedure is to restore flow in the dominant venous sinus area where the clot is. Any IJV problems can be addressed later on, if needed. However, he did mention that IJV flow often improves after venous sinus stenting. He said there would be no venogram or manometry needed because, with the clot, stenting is needed to hold the vein open to improve venous flow. He said manometry is only needed to determine the need for a stent. He said it would be a several hour procedure because he has to carefully make a “tunnel” through or around the clot to restore flow.

I 100% agree with Dr P. After all he is the authority on this and seems to have a plan to take care of sinus clot. I am sure he understands that dislodging the clot can potentially travel to the heart & lung area and could cause Pulmonary embolism so I am assuming that is why a care has to be given when placing stent in the transverse sinus (hence several hour endovascular operation). That would only be my concern regarding this procedure.

As far as IJV is concerned, I think you should not pursue this further. at least for the time being. I am not a doctor but I do not see any meaningful stenosis on both of them. Your smaller (probably hypoplastic) left IJV is slightly indented by C1. Even if you were to remove the slight C1 compression, my assumption is there will not any substantial gain in terms of outflow improvement due to its inherent narrowing and since it was not draining much to begin with. On your right dominant IJV, I do see slight compression by the C1, I am not sure if that warrants an operation since it does not appear to correlate any pre-existing IIH symptoms prior to your surgery, at least based on what you shared about your symptoms here ( not Doctor again, but my opinion here). I think it will be an issue if the compression is moderate to severe on your right dominant one which I do not see on the limited images you posted here. So I am betting that all your severe IIH symptoms are due to new narrowing induced by the surgery and you will be fine after the right transverse sinus is stented.

Thanks for your input on the images. It’s greatly appreciated!

Dr P said he’s only had one patient develop a new clot after the surgery. They preload you with 2 different blood thinners to avoid a repeat clot. Dr. P was adamant that it’s important to wait and let the clot “solidify” so it doesn’t break off easily but still be pliable enough to make a tunnel through it (so it can be stented).

Dr. P said after we open up the dominant right venous sinus, then we will have a better idea how well the IJV and overall draining will do. And proceed with other treatment down the road, if needed.

Well, I am not here to challenge what a trained doctor had to say about your pre-existing IIH symptoms but I think you would have many more symptoms than just a headache alone (headache can have many etiologies than only IIH). IJVS is all too familiar to us that suffer from it so we have pretty good idea of the symptoms. I think you might have had mild cerebral venous congestion as Dr Hui indicated in his report but to what degree it was affecting you is not clear given the other cranial issues you have had. The narrowing of your right IJV does exist but it does not seem severe at least based on the limited images I have looked at. So the jury is out on this one. One way to find out is to address the current stenosis on your transverse/sigmoid sinuses and see if you have residual IIH symptoms, then it makes sense to pursue addressing the narrowing of your right IJV.

As usual, you are spot-on! The best plan of action is to fix the known surgically-induced, clot-based stenosis first with hopes of restoration of venous flow. Again, many thanks for weighing in on this.

I hope that things do improve without the need for surgery, but good that you have an experienced surgeon if needed. Hugs and prayers

Thank you @Jules! That is absolutely my hope, as well. I remain optimistic, despite whatever route this thing goes. I want to sincerely thank this group, @KoolDude @boogs99 @jules @Isaiah_40_31! It’s been such a blessing to have a group of people to learn from and to discuss options with along this journey. All of the surgeries we discuss in this group are very tricky and should be approached with great thought and care. Again, thank you all so much!