So i have heartbeat in my left ear ( the side my eagles calcification is worse according to drs). Alrhought my right side has the stabbing awful throat pains. And i get headaches on the rigt side. The heartbeat in my left ear comes upon laying down on that side, bending down, turning head. Anyone have this symptom? Did surgery resolve? Meeting cognetti in 2 weeks. This has been awful. I hope he can help. Thank you!

I did reply on the other thread where you mentioned about this symptom… I had it & it has been almost completely resolved with surgery. With me, it was because the styloid process was compressing a vein, so the blood wasn’t able to get through properly. There can be other causes, but hopefully surgery will help you. With vascular ES often the symptoms go very quickly with surgery, so I help that Dr Cognetti can help you. Hang on in there, not long now!!

Hi Jules. Thank u so much! I am just very nervous and anxious! I hope u are doing well. All the doctors ive been seeing were passing me around for months now. So glad i found this site and learned about cognetti whos 3 hour drivr away. i hope he can help! Fingers crossed

I had the same thing when I laid down. Resolved with surgery as well. I traveled from Alaska to see Dr Cognetti. Worth every penny spent and all the time and effort to get everything coordinated. Twice! I found this image online. I think it explains why we get that feeling. I have never uploaded an image like this so I hope it works! You can see the carotid artery is in such close proximity to the styloid process so I always felt when I laid down in just the right position or moved just right the artery would rest on the styloid process and then that feeling would basically pulsate thru the styloid process and throughout the skull. I hope Dr Cognetti helps you as much as he helped me. It took about a year after my second surgery but I am basically back to baseline as far as eagle syndrome goes. I get a twinge once in awhile that really scares me but they’re fleeting. It’s been 5 years since surgery. 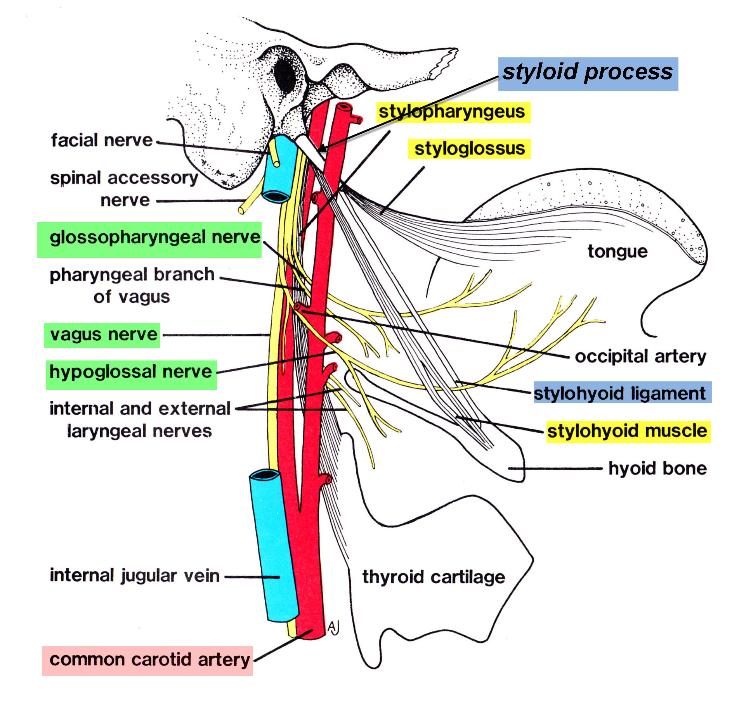 Hi! Thank you so much for that information!! Yes that scares me that it is so close to so many important things in our neck. The doctors in my state were horrible, passed me around, said nothing they can do for me. So im praying cognetti can help like hes helped you and so many others! Its crazy that more doctors are not capable lf doing this surgery or understanding this. I am counting the seconds until i meet cognetti. I am so happy for you that you are feeling better! Can ask what type of twinge? Is it in the incision area?

I saw people talking about first bite syndrome and i already have that. So does my mom. It started for me as a teen maybe after my tonsils were removed. My mom told me allergies cause it. But now im wondering if it was my tonsils being removed as i see the cause is usually surgery.

Thank you again so much for that information and so glad you are doing well!

From what I’ve read about first bite, it’s caused by irritated nerves following aurgery in that area, so it could possibly have been caused by your tonsillectomy, although that wasn’t the sort of surgery mentioned in the article. It normally eases off too, so I’m surprised that you still have it! Some people just aren’t happy with one rare syndrome

I sympathize w/ you having first bite syndrome. I got it from my ES surgery & it has improved but never gone away. Since you already have it, you won’t have to worry about getting it! I’m sorry you’re suffering w/ FBS though. No fun!!

Hi! I am just wondering how long did it take after surgery for heart beat in ear symptom to resolve? I had surgery with cognetti little over a week ago and i am still having that symptom. It seems like others had this resolve immediatley after surgery.

Mine to a couple of weeks I think, I presumed that it took that time for swelling to go down. Mine was down to the jugular compression, which you have too I think, it still returns a little if I’m stressed, get hot or exercise- I think that it’s because of blood pressure going up a bit in those situations. It’s just annoying occasionally, it doesn’t bother me now that I know I’ve been fixed!

Hi everyone. So im a year post op and heartbeat in my left ear when i lay down or bend down has not gone away. I saw the vascular surgeon who did a scan and said my jugular is now open and everything looks good. And he told me to go see an ENT. my surgeon couldnt answer this ?- dr cognetti. So i made an apt at an ENT in my state in a couple weeks whos on the eagles list (he has experience but doesnt operate). Any ideas what this could be or why this didnt resolve? Im fine living with it but i just would like to know what it is. I never had this until i had eagles.