Does anybody know whether some surgeons are reluctant to remove as much of the styloid process as possible because they are worried of the nerve injury during the surgery or after the surgery?

@vdm This is what worries me as well since I am expecting some kind of surgery in the near future. I think it is unpredictable but majority of good US/UK doctors (Samji, Hepworth, Hackman…Axon) do remove it to the skull base as we learned from the numerous patients that went through the surgery. Even cases, where nerves were wrapping around the Styloid as was the case with @Isaiah_40_31 if I remember it correctly. I assume this highly depends on the experience of the Surgeon and their confidence level. I can only assume that some avoid it when they see that the base of the Styloid is tangled with nerves or near arteries and instead of unwinding the nerves or moving the arteries with care, they simple stay away from it. Only very few cases (mainly classic Eagle) are to do with the fact that Styloid might not need to be removed altogether and only resection of it will do the job.

I am worried because my Styloid is not long (~1.8 cm) and the base of the Styloid is what is really compressing my dominant Jugular Vein. You can’t even take their word when they promise they will remove it to the skull base as I have seen some patients who were told so but after surgery learned that only some of the styloid were removed.

It’s generally because they’re worried about injury during surgery- the facial nerve is usually monitored during the surgery so they can see if it’s under stress if it needs to be moved. We suggest that members ask if there’s any of the styloid left in, will they smooth the tip, as we have heard of some surgeons just snapping it.
@Isaiah_40_31 didn’t have hers removed back to the skull base by Dr Samji because of the nerves wrapping round it.

Jules is correct in that one of my styloids was removed to the skull base but the other (w/ the glossopharyngeal nerve wrap) was not. However, the right styloid which was not cut all the way back, has been asymptomatic since my surgery in 11/2014 so the amount of styloid that was removed is all that was necessary to give symptoms relief.

I have also recently learned that even when a doctor tells a patient that his/her styloids have been removed to the skull base, there is often a bit of styloid left behind (i.e. .01-.09 cm) as in some doctors’ minds, that is “to the skull base”. Also, most doctors who do remove to the skull base will tell a patient that (s)he will TRY to get as close to the skull base as possible. This leaves room for the doctor to exercise his/her best judgment during surgery as to what is safe for the patient’s nerves & over all good recovery. Sometimes that judgment is incorrect & a different doctor w/ a different level of experience is required to do a follow up surgery when symptoms don’t subside. Unfortunately, there are also those situations where finally living w/ some symptoms & taking meds to help control symptoms is safer than doing the deep dive in to get all of the styloid out. Since we are each “constructed” a bit differently, no doctor can give a “for sure” promise for total styloid removal.

It’s best for you to talk to whomever you choose for surgery to gain an in depth understanding of that surgeon’s experience w/ ES surgery, willingness to be aggressive in styloid removal, & what the setbacks might be that would prevent full styloid removal. No surgeon wants to put a patient in the position of being worse after surgery than before, thus, concessions are sometimes made during surgery to prevent that scenario.

That’s what I thought too, the reluctance comes from the risk to injure the nerves during the surgery, not what happens after the op… Maybe there are some potential risks of further re-injury after cutting too much, especially if the surgeon leaves the tip of the stub sharp and not polished?..

@KoolDude I went back to your 3D render of the skull and also noticed possibly being something I found on mine: the original styloid process itself also looks short, but some attachment looks like giving it that thickness. Might it be calcified tendon of stylopharingeus muscle?

The stylopharyngeus is a muscle in the head that stretches between the temporal styloid process and the pharynx. The stylopharyngeus is a long, slender muscle, cylindrical above, flattened below. It arises from the medial side of the base of the temporal styloid process, passes downward along the side of the pharynx between the superior pharyngeal constrictor and the middle pharyngeal constrictor, and spreads out beneath the mucous membrane. Some of its fibers are lost in the constrictor muscl...

@Jules re facial nerve monitoring… just wondering if this is the only nerve they monitor during the surgery? There are quite a few other nerves going nearby…

As far as I know, all nerves that might possibly be injured during surgery are monitored, but that is a very good question to ask. I know that Dr. Samji told me he monitors the nerveS in the neck during surgery. It never occurred to me to ask which ones.

@vdm Well, I was not able to see a good degree of calcification on my 3Ds but might need another pair of eyes. Can you point me which 3D pic you saw the calcified thickness. I thought the thickness of my Styloid was round and not flat as yours and usually the roundness means it is natural bone growth not calcification.

I know the nerves are also monitored with Dr Hepworth. I can ask them which specific nerves are being monitored if you would like on March 9th.

@hyperichard that’d be really interesting to learn!
@KoolDude I thought I saw it on this pic (highlighted in blue/black) 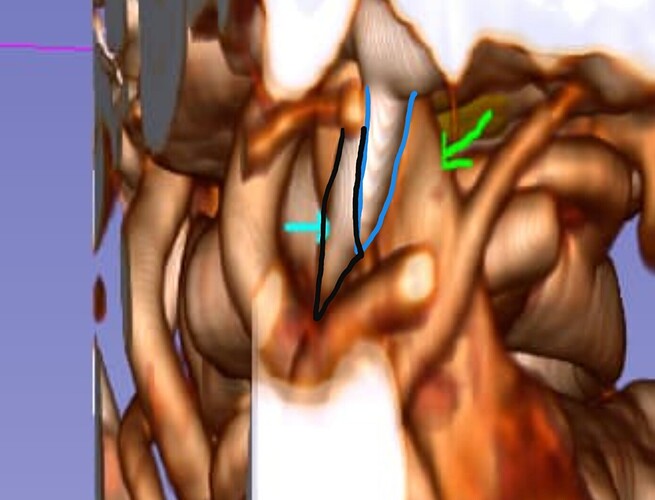 Not sure if any others are too- I know the facial nerve was because I ended up with bruising after the first surgery, I made a joke when I went for my second, asked if they’d dropped me! The doctor said the must’ve caught a vein over my eyebrow (he said it was known as the vein of sod as it’s easily caught!) when monitoring the facial nerve. Didn’t think to ask about other nerves either!

I had a note of three nerves monitored by Dr Hackman during my surgery on my discharge note but i didn’t keep it to remember which ones.

@vdm Well to my eyes it appears that it is thicker at the base and little pointer at the tip of the Styloid. Here is another view. It does not appear to me that a calcified muscle is attached to it. Perhaps, we will only know if it is brought it out. 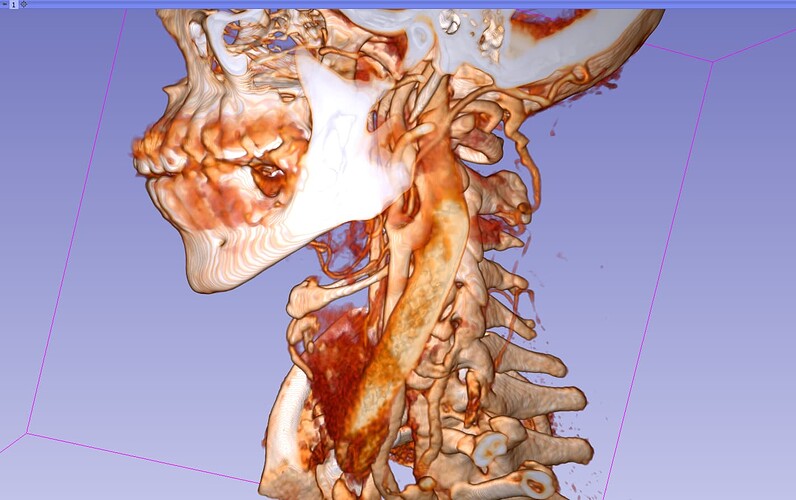 @KoolDude you’re right, perhaps the only way to analyse it is to take it out…
On the other hand… Doesn’t it look like your left jugular is… bent? Curved behind the artery?

Upd: my rationality was that “[…] stylopharyngeus is a long, slender muscle, cylindrical above, flattened below.”

Well…I do a lot of slicing and dicing sometimes to get to the styloid so it might be confusing. Yeah the dominant Jugular Vein is pushed by Carotid Artery a little but this is normal since they both run in the same Carotid sheath. You can see this in almost every Jugular & Carotid artery touching at some point, particularly where the Carotid Arteries separates. It is only significant if it is compressing it significantly to cause narrowing. It does happen but it is rare.

@tp12 thanks, I think that sounds like the real monitoring, especially if you had a clip on your tongue to monitor one of the nerves.
By the way, how are you doing now? Have you got rid of all the symptoms or some of them still come and go?.. If I remember correctly, initially there was some serious temporary unilateral facial paralysis, but the nerve recovered a few months later?..

yes, I had paralysis of the right side of my face after surgery. I have basically completely recovered at this point. there were slight muscle changes in my face that happened during the paralysis that still exist today. the way my eyelids close is still different than it was prior to surgery, I used so much muscle on the left side to try and work the right one closed, that the left side scrunches naturally now, for example. my eye brows sit in slightly different positions unless I’m consciously moving my muscles to where they used to sit. I’m not sure how to better explain it, but it just functions slightly differently. I attribute it to being muscle use related because i can for example move my eyebrows back. my ear still has some numbness/fullness and the weird temperature rush thing when I’m eating or drinking, but id say it’s 60% better than it was, that has been a very slow improvement.

That would be great! Thx @ hyperichard!

The temperature rush when you eat could be an atypical form of First Bite Syndrome. We’ve had several members who had FBS that didn’t follow the “normal” symptoms, for example, scalp pain instead of facial pain. I bet that sensation will go away over time. Most people w/ FBS do recover completely w/in a year post op.

), At least the muscles still work & my ES symptoms are gone. That’s what counts the most.

I expect your symptoms to continue to improve over the next months. I’d say mine recovered 90-95%. I hope yours do too!

@tp12 Great to hear you have practically completely recovered. It sounds like properly monitoring the nerves pays off and should be a must during the surgery. As long as the nerve isn’t totally overstretched/pinched, I guess they recover almost no matter what, just slowly.