Not sure what to do now

Hi. I have bilateral calcified stylohyoid ligaments. I had surgery in Boston with doctor Annino and he took out the middle of my left calcified ligament with the thought that it would decrease the tension. My neck pain is gone, but I still have jaw pain, headaches, and ear pain. Wondering if I should ask him for a referral to Dr. Cognetti. I am scared to have nerve damage or worse problems. If you have had surgery with Cognetti or Annino or some good advice, I would appreciate it. Thank you so much! I do have an appointment with Annino on April 15th to decide if I want my right side done. Feeling unbalanced now and my jaw is deviating to one side now that they are different.

There have been people on this forum who’ve had very successful ES surgeries done by Dr. Annino so I suspect your current symptoms are coming from the remaining calcified ligament as that side is still “tethered”. Many people w/ bilateral ES have experienced a symptoms flare after the first surgery which is caused by the remaining elongated styloid or calcified ligament.

I must say, I’m surprised Dr. Annino didn’t remove the whole ligament rather than just the middle section (unless that’s all that was calcified). You should ask him if he fully removed the calcified part of your s-h ligament or if there is still some calcification left in there. If he left calcified sections of the ligament in place, even if the ligament is now untethered, it is possible the remaining calcification could be irritating nerves & other tissues & adding to the symptoms the right side is causing. The more completely everything is removed, the better the end result.

In my opinion, a second surgery to take care of the right side is in order regardless of which doctor does it. This will give you more full recovery from ES symptoms in the long run.

Getting a second opinion from Dr. Cognetti (which can be done by phone) isn’t a bad idea. Please let us know how your appointment w/ Dr. Annino goes when you see him in April.

Isaiah, thank you so much for your response. Dr. Annino prefers to remove the middle segment and avoid the majority of the nerves this way and said that most people have a great deal of relief. I am hoping that once the other side is untethered I will have improvement on both sides then. Just wasn’t sure if I would be better off to have it removed at the skull base by cognetti. I don’t think that Cognetti would be covered by my insurance even if Dr. Annino referred me as I don’t have out of network coverage. However if it ends up being necessary, I would rather pay out of pocket and not have a lot of lasting nerve damage. Thanks again.

Did you have elongated styloids as well as calcified ligaments?

I’m seeing Dr. Annino on April 1st for a consult and hoping he can do my surgery soon. Wishing you well and hoping your symptoms resolve soon.

Hi. Technically the report says markedly elongated stylohyoid processes left worse than right, measuring up to 6.9 cm in size. It is calcified up to 1.5 cm before the hyoid bone. The left oropharynx/hypopharyngeal soft tissues demonstrate slight mass effect and indentation due to the elongated left-sided stylohyoid process.
That was from a maxillofacial CT with contrast that I had done as I have severe dry mouth and felt like the parotid gland was compressed and swollen.
Dr. Annino removed 2.9 cm of the 6.9 calcified area. He said that he took out the middle portion to untether it essentially.
Hopefully when I have the right side done, it will balance it out and shift it.
I was calling them calcified stylohyoid ligaments as it was all connected and calcified. I wish I knew how to attach a picture here as I do have a cool 3d CT scan image.

He is very nice and did a great job. I am just wishing that all was resolved, but hopefully when I have the other side done, it will help. My neck pain on that side is completely resolved and is still there on the right, most likely because the right stylohyoid process and calcified ligament area remains. I will see Dr. Annino on the 15th to decide how to proceed, but will most likely do the surgery with him on the right side as it will be covered by my insurance. I will talk it all over with him then. Just was trying to sort it out a bit before then as this is the place as so many of you have had similar experiences. Good luck with your appointment.

Personally I would see if you can get more removed from the remaining side when you see him; I see what he’s saying about untethering but if the styloid processes are causing problems & not just the ligaments, leaving quite alot in isn’t going to give you as good a result with surgery…Although with insurance constraints it’s not going to be easy, you could always have a phone consult with Dr Cognetti to see what he thinks?

Thank you Jules! I love all of the support on this site from others who truly understand this. Sounds like I need to work on getting a phone consult with Dr. Cognetti.
`

As I understand it, Dr. Cognetti doesn’t remove the styloids to the skull base but leaves them about an inch (2.54 cm) long - the normal length of a styloid process. It is possible that he only does that in some cases & in others, he removes them fully. Just wanted to give you a heads up & a topic to discuss w/ him should you get a referral &/or have a phone consult.

You have some long styloids/calcified ligaments! WOW! If you want to upload your CT pictures onto the forum, here’s how:

I realize that explanation may be as clear as mud, but it’s the best I can do for now.

Hi! We’re happy you’ve joined us but not happy you’ve been diagnosed w/ ES. Glad you have an appointment w/ Dr. Annino soon. Please let us know how your appointment goes. We’re here to support & encourage you. Hopefully you’ll learn a lot about ES & its treatment as you read the posts on this forum. 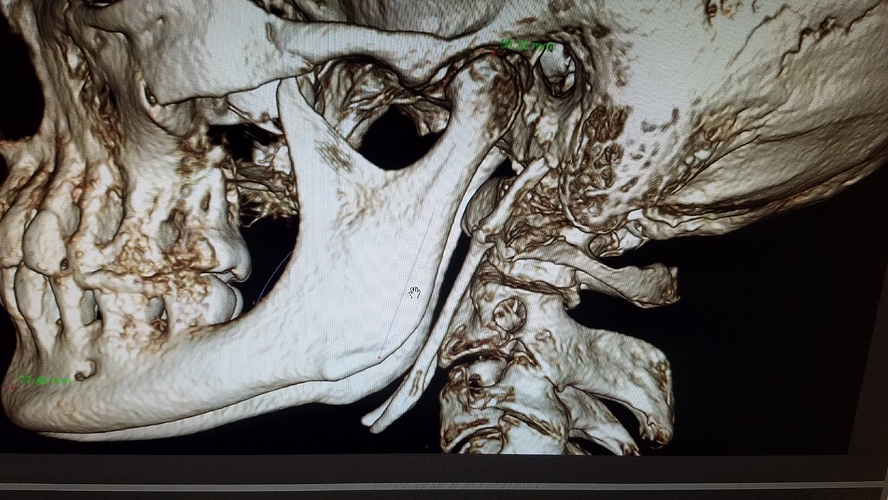 Thank you so much. I am going to check with Dr. Annino and see how much is left up above. They called again to change my appointment and I was able to get it put back to April 8th now, rather than the 15th. So, probably not enough time to send stuff to Dr. Cognetti and hear back before then. I really appreciate knowing that he doesn’t always remove to the skull base. Really appreciate this forum so much!!!

Yup, ddemaso, you’ve got some long calcified ligaments there! As Jules noted, usually, the more you can have removed, the better the long-term result. I’m sure there are cases where the minimum was removed & ES symptoms were resolved but that’s not the norm in our experience on this forum.

Glad you were able to follow my directions & get your CT pic posted! That’s a very detailed 3D image.

Thank you so much!

Awesome!!! That’s in 3 days! Did you call for cancellations? That’s what I always did at Emory and it worked several times!
So happy for you!

Yes I called with some questions and they told me there was a cancellation… lucky me!