Picture of my Neck from Mayo Doctor 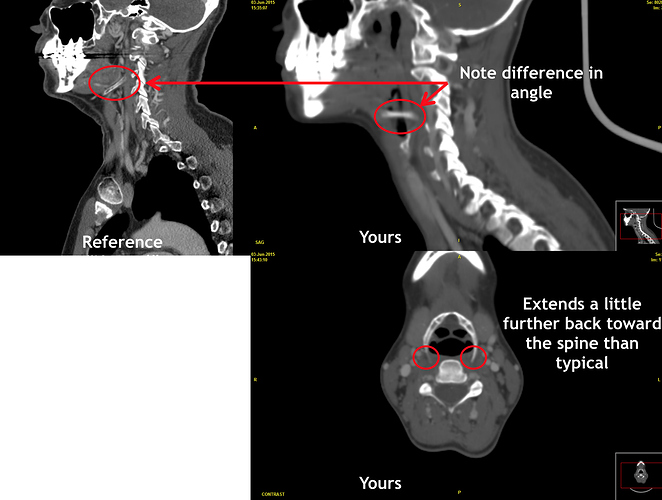 So Besides having Eagles Syndrome…In Case there is new people here…I have eagles syndrome…Got my right styloid out a year ago…Now dealing with severe left styloid pain(surgeon won’t take the other side out because he’s thinks my other side is still hurting me)…Pulsating humming in the affected ear, weird clicking sound in neck and Im not even moving it, Severe pain under jaw, pressure behind tonsil, pain under eye…etc. I included a picture of some abnormalities the Mayo Doctor said I had in my scans besides the styloids…he said my hyoid bone is horizontal not angled like its supposed to be and my thyroid cartilage is far back towards my spine…I have been having severe pain in my thyroid cartilage (larynx) now I have clicking when I swallow…It feels like the cartilage of my larynx is sharp!!! Like a knife…Anyone know why my hyoid bone is so straight??

I’m guessing your hyoid bone is straight instead of angled because that’s how your body was made. We are all different in our body compositions. I have an abnormally large thyroid gland. The size isn’t caused by disease, it’s just big. I think that what’s considered “normal” in the medical field is sometimes just someone’s opinion of how something should be based on statistics & not always what is “normal” for the person in question. I’m sorry your surgeon won’t take care of your remaining styloid. Can you travel to another province & see a different doctor or try the medical tourism route?

Hi Kelx,
I would say ‘glad to see you back’, but as you’re back because of ongoing problems that’s not good…
I know we’ve noticed a few members here recently who have hyoid bone abnormalities alongside the ES, seems to be extra long processes on the hyoid bone as well, I’ve not seen any mention of a straight one. It seems possible that this could be an abnormality you’ve always had, but with time it’s now starting to play a part in your pain along with the styloids. In the Newbies Guide section under the ES Info there’s a mention of some doctors who classify ES:
SHCS was suggested by Candice C. Colby, MD; John M. Del Gaudio,MD in their paper ‘Stylohyoid Complex Syndrome- A New Diagnostic Classification’ on JAMA Network.

As well as elongated Styloid Processes and calcified Stylohyoid ligaments they also suggested that elongated hyoid bone processes could cause tension and reduced distensibility of the SHC, irritating the surrounding cervical structures with movement of the complex.
So as your hyoid bone isn’t at a correct angle, it seems reasonable to presume that the whole structure is affected.
I can understand in a way that the doctors are reluctant to operate; it’s possibly worth looking at what else could be done alongside styloid removal- maybe having the hyoid processes shortened as well or something to try to reduce your pain.
You mentioned the pulsating/ humming in your left ear now- it sounds like possibly pulsatile tinnitus, which can be a symptom caused when there’s venous compression, but it can have unknown causes- have you had a CT with contrast before to look at the blood vessels; I can’t remember?
It sounds like you need a really expert opinion, so may have to go elsewhere… I know one member researched the doctors who’d published the papers like the one above and was able to see one of the authors for surgery- maybe you could look into that?
Thinking of you…

Yes maybe it was always like that…I thought maybe it was from another problem lol. But I mean how could one even fix the angle of a bone if it actually is a problem?

Yes I have had a CT with contrast but not an Angiogram too look at the blood vessels. I had a surgeon suggest it then he said 1 in 500 people who undergo it have a stroke…and I was freaked out…Pulsating humming is venus compression not arterial compression? Im not sure the difference? lol How would one know…

A CT with contrast should show the blood vessels anyway, so you shouldn’t need an angiogram as well.
I don’t know about the hyoid, I’m guessing they couldn’t alter the angle of it, but if the processes were a bit long and causing irritation they can shorten them.
With the pulsatile tinnitus, I know I had it and it was down to the venous compression. It’s improved a lot since surgery.

Sorry to hear that you are struggling with more issues. I am wondering if when the first styloid was operated on if it was a complete removal including the hyoid ligament? If so is it possible that it caused the shift in our hyoid angle?

I am not a doctor so if this sounds possible to you, then ask the doctor his/her thoughts on it.

Is it possible to send your scans to Dr Samji to get a phone Consult as another set of eyes n your case?

Those scan was obtained before the removal of my styloid lol. So that’s out of the question. No idea maybelline I was just born that way hahaha. Born With… problems

Kelx, it’s been ages since we heard from you. We have a couple of new Canadian members, and I’m wondering whether you could give them a bit of direction/help.

Hope things are going all right, and that you are finding some resolution to the pain you were dealing with