Hello everybody! I’m in constant pain which is triggered by swallowing. It feels like something is rubbing against laryngeal wall inside. My ENT said it’s the hyoid bone so she did a surgery where she cut the great horn of hyoid bone however 3 months after surgery I’m in horrific pain. Like I said it’s triggered by swallowing like something is rubbing and there is a bruise and the nerve in the area starts shooting pain. Anybody do you think it can possibly be the thyroid cartilage? The great horn of thyroid cartilage? Please help!

So sorry to hear that you’re still in pain after surgery. What does your ENT say about the ongoing pain? I know that nerves can take a long while to heal, so 3 months isn’t that long (although it must feel never-ending to you). I know with the sensation of a lump in the throat people have, it’s not always something stuck in the throat but irritated nerves giving that sensation, so I wonder if maybe the rubbing & bruised feeling is that? What medications have you tried so far?
I remember that one member- Kelx- still had pain in the thyroid area after surgery & was still searching for answers, but she’s not been on in a while so I don’t know if she ever got help…
Thinking of you, Jules

Hi Bella,
The stylohyoid ligament connects the styloid process to the muscle- you can get the ligament calcified, but I don’t think I’ve heard of anyone with calcification of the muscle at all.
Yes, you can have normal length styloid processes, but have calcified ligaments which cause problems. This would show up best on a CT, not so well on an MRI. MRI’s are useful for showing up other problems, but if you suspect calcification, then the CT would be best.
We’re not doctors though, just people who’ve experienced ES…
BTW- this has come through as a private message to me, not a question on the main forum- did you want me to make it a general discussion so that others can chip in if they have any advice?
Best wishes, Jules

Hi, Jules!
Thank you very much for the info. It’s quite possible for me. Do you mind me asking if you know who was operated by one of these doctors so I can get in touch with that member?

Hi,
The doctor is Dr Candice Colby, based in Grand Rapids. The member who was trying to see her was Skip; I’ve found the discussion about it but it sounds as though he either didn’t get to see her or opted to try another doctor instead. Here’s the link to the discussion: Possible Eagle’s w/ CT scan
It might still be worth you trying to get in touch with her yourself?
Best wishes…

Jules, my doctor wants to go after styloid process even though it’s normal in length, did any of the members had ES with normal styloid lengths?

There have been quite a few members who’ve had symptoms even though their styloid processes are ‘normal’ length- it can be that they’re growing at an angle causing symptoms, perhaps quite wide in places. Also often doctors don’t agree on the ‘average’ length - I’ve seen research papers suggesting anything between 1.5cms- 4cms could be normal!!
It sounds like you’ve got some difficult decisions to make?

What do you think about the styloids? 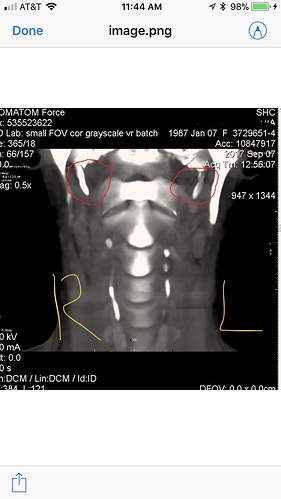 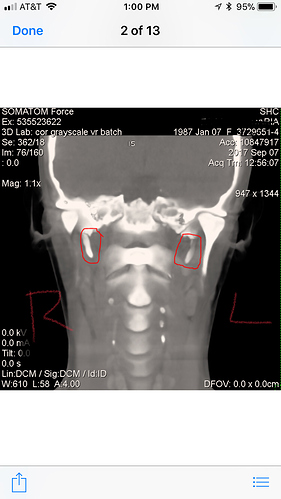 Bella, we’re not doctors on here, so can only give you an amateur opinion… if you were to ask about the images or look for a second opinion, I would get them to look at the width & angle of the styloid processes, as well as the length. The left side is quite angled, & they both look wide compared to some images. Some members have found also that if the styloid processes are quite long & angled, it can get quite close to the cervical vertebrae processes- it’s not able to tell exactly from the image, but there doesn’t look like there’s much room between the SP on the left side & the vertebra- but it could just be the angle you’re looking at it from. if it was me, I’d see if I could get it reviewed by one of the more experienced ES doctors. I think that Dr Samji or Dr Cognetti do phone consults.
Did you ever get an estimation/ measurement of the length of the SPs when you had the scan? That would be interesting to know as well.

I’m interested in the styloid process marked with “R”. That’s where I have pain. I does look thick to me. They measured it and said it’s 2.5 cm I wonder if the thickness plays a role even though the length is normal?

ASOLUTELY! A normal length styloid that has is very angled inward or outward or is thicker than average can cause the same symptoms as elongated styloids or calcified ligaments.

hello. I am in the process o diagnose my ES. I have problems and symptomps on my right side. On the CT it shows 35 mm lenght on my right and 28 mm on the left. Interesting, i did also a Neck and Head MRI with contrast (3 Tesla) and on the report it says the same mesures but also it is mentioned the thickness. So on my right side, the one with problems it says 35 mm lenght, 4 mm thickness and it is demineralised on 3-4 mm. The left side, the one with no symptoms is 28 mm lenght and max 3 mm thick, with no mention of mineralisation. I did not find anywhere the normal thickness, but i belive that thickness has a role. I sent my info’s to a clinic in Germany and described my symptoms and they do belive it is Eagles and they want to do the surgery, on both sides.

hope my case and infos help (sorry for my rusty english)

Hello Bella. On the CT Report it is mentioned just that the styloids are elongated, no mention of thickenss or mineralisation (i don’ know if tickness can be measured on CT, or the mineralisation, altough it is a rare condition and many radiologist don’t know to handle all infos). On the MRI report it says data about both thickness and mineralisation. Here is my CT. I don’ t have photos from my MRI, i was unable to to open the CD data.
My symptoms are more related to the swalloying process. I feel a stabbing pain on my right side and down the throat when swallowing food, some mild pain on the right side when i move my jaw, pressure in my head (maybe tinnitus), when i touch my right side of the mouth with my base toungue i feel something there (like it si inflamed, swollen). I feel dissconfort on the right side sometimes when i speak, like a tickle. But the simptomps became more painful in the last month. Lack of energy and mood (i don’t know if it is related to the blood flow or anxiety), foggy brain, some difficulties in focusing. I don’t use any pain meds, sometimes i use a spray o lidocaine which eases the pain in the throat.
Hope these info’s help. 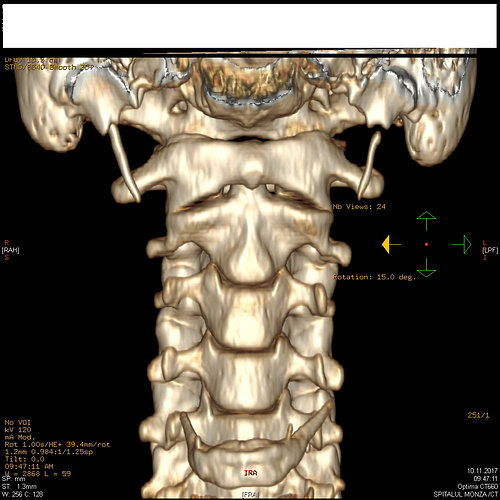 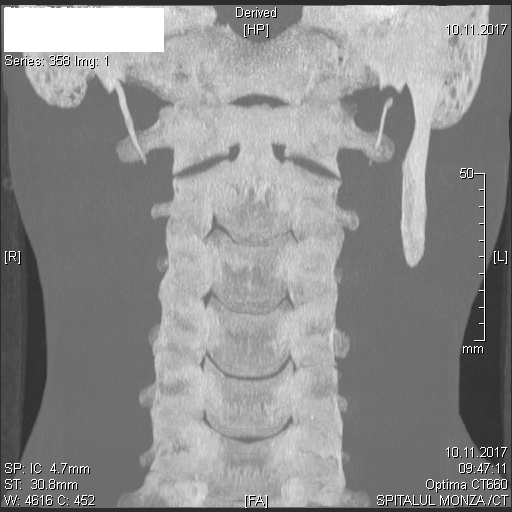 FNR - So glad you’ve found a clinic to do your surgery. Please keep us posted as to how you choose to proceed, & if you do go to Germany for surgery, please let us know how it goes. Your right styloid does look longer & thicker than your left & your symptoms are typical ES symptoms.
I hope you make the decision for surgery. Post op healing takes a bit of time (1-2 months) but it’s so worth it!

It does vary, so you would need to check with your doctor. I spent one night in hospital, as a drain was put in to reduce swelling; most of the US doctors seem to discharge patients that same day. I’ve not heard of anyone staying more than one night, so hope that that’s reassuring for you! You could always message Michael, as he’s having surgery soon in Germany?