I finally had my appointment with Dr. Krempl here in OKC, and I although it went sort of ok, I am not exactly thrilled about it. First, he was very skeptical and wanted to know where the diagnosis of eagle syndrome came from (probably because I was the one who found the problem and pointed it out to my ENT). He did come around once he saw the length of my styloids. however…

I don’t think he knows much about jugular compression and is really only familiar with the classic and carotid variant. He actually doesn’t think compression of the jugular is a problem, as (in his words) they actually can remove a jugular with little to no problem and do it all the time. I am assuming, however, this is only the case when the other jugular is open (I have bilateral compression).

He was skeptical of this causing most of my symptoms…there must be something about me that makes doctors think I’m crazy and it’s all in my head. Given the length of my styloids, he was willing to do the surgery (with a CT angiography first). (They are 35 and 36 mm), BUT would not take it down to the skull base. In his words, he wasn’t worried about leaving a half inch or so left since a normal styloid is 1/2" - 1". This made all of my alarm bells go off - given everything I’ve read and what you guys have stated. I DO NOT want to have to do this more than once…

Anyway, I am getting setup for a CT angiography and am waiting on Dr. Hepworth’s office to get back with me to schedule an appointment there. I hate to have to wait on the surgery, as I know he has long wait times, but I know it is the right thing to do as I don’t really think this guy knows much about my particular variant. Thank you guys so much for your guidance and help!

The one cool thing is I was able to get some 3D reconstructions of my CT scans,. I have attached a couple of pictures, unfortunately they are not contrast so you cannot see the blood vessels, only the bones.

the interesting thing about this particular scan (taken in August) was that I was wearing a cervical collar after being involved in an accident. The collar pulled up on my head enough that the space between the styloid and C1 actually opened up to a normal distance! 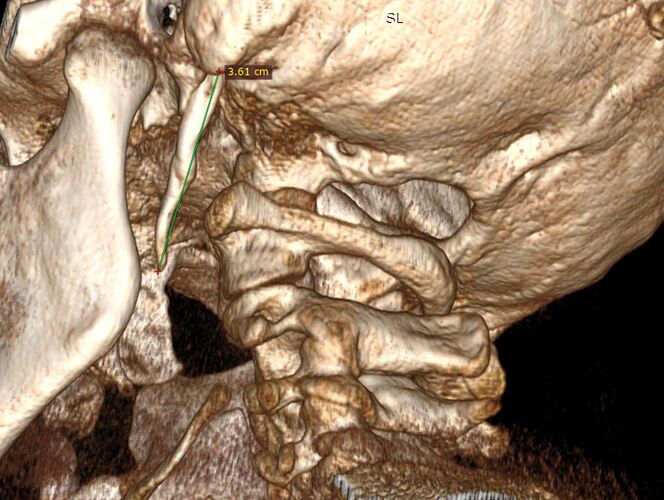 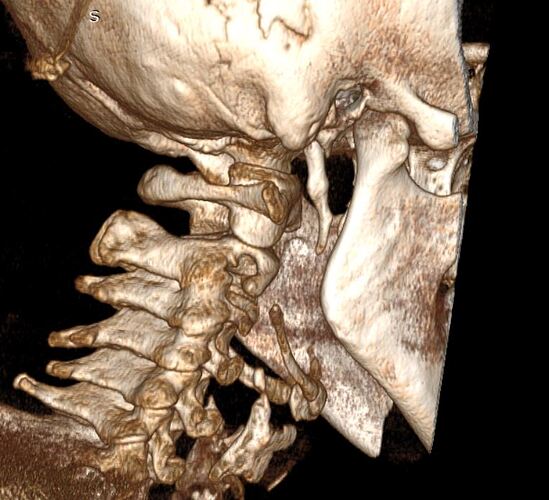 This is an image of a head CT that I had in February of this year, unfortunately it does not go down very far but on the very edge you can see that the left styloid is only about 2 mm away from C1. The right styloid (not pictured) is about 3 mm from C1. This is the normal position. With the cervical collar, the gap opens up to about 7 mm.

I’m sorry about Dr. Krempl’s lack of knowledge re: the IJV variant of ES. He has helped some of our members, at least w/ diagnosis, but I think they all had non-vES. You’re very wise to pursue seeing Dr. Hepworth even if the wait is long. I’m confident you’ve read about his reputation here. Make sure you ask to be put on a cancellation list when you get your appointment date. That has helped several of our members get their appointments moved up significantly.

Your styloids are thick & strangely shaped. I can see why both would be causing IJV compression. Please stay on top of Dr. Hepworth’s office. They’re notorious for foot dragging when it comes to call backs/follow-up for scheduling. We had one member who resorted to calling every week until an appointment was secured.

If you aren’t already, try sleeping w/ your head elevated at night. Icing or applying heat to your neck may also help, & once you have a solid diagnosis, asking for an Rx for a blood thinner such as Plavix can be very helpful in reducing symptoms while you wait for surgery.

Please keep us posted as to how things progress for you.

A shame that you’re not feeling confident with Dr Krempl, but I think very wise to hold fire & wait for Dr Hepworth. Looking at the images, if he shortens the styloid as yours are pretty thick, so it might not be enough to avoid jugular compression…interesting the difference wearing a collar has made opening things up…
Just a note, & hopefully other members better at checking CTs might comment, but the greater cornu of hyoid look pretty long to me, they’re very close to the cervical processes too, might be an idea to check that out too?
I hope that you’re able to get an appt with Dr H without too long a wait!

I’m probably projecting my own history onto the appointment - I’ve had really bad experiences with specialists during this journey. I am sure he is a good doctor, and he was compassionate and listening, I probably should just say he is probably not the doctor I need for IJV, I didn’t mean to imply that he is a bad doctor or surgeon overall, I feel a bit bad now after re-reading my post, it was a little harsh.

Thanks for the advice,