Symptoms and Treatments Complimentary Therapies
treatment
Wgrannells May 11, 2022, 1:30am #1

Quick question about aftercare. Has anybody had extreme ear pain that just won’t go away even with the narcotics I am on day 5 of recovery I’m trying to figure out this pain and why it’s so bad. Has anybody that’s had Their right Styloid removed had extreme pain in their ear on the same side at the styloid was removed from. Tomorrow Wednesday the 11th I am going to have my stitches removed. Also when I get home from having the stitches removed I am stopping at my doctors office who is going to give me a shot of Toradol. He said that should help quite a bit. Has anybody had that given to them Toradol as a shot. 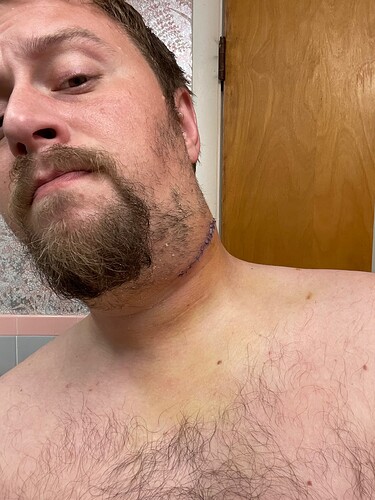 Check if you don’t have any ear infection. Might be some difficulties with properly draining fluids via Eustachian tube and fluids/bacteria collecting in the middle ear.

@vdm makes a good point. Your incision is quite long because of the length of your styloid. It’s possible the internal swelling has blocked up your inner ear so it’s not draining properly. If your ear is fine, it’s likely nerve pain from the inflammation. If the Toradol doesn’t help, you could request an Rx for a nerve pain med like Gabapentin, Carbamazepine, or Amitriptyline to help w/ that.

Thank you guys for all the info I have my appointment today at 1 o’clock at Yale Smilow Cancer Institute to have my stitches taken out.

I’m a week out today from my left styloidectomy. Intermittent twinges of pain in my ear despite meds but mostly serious fullness. I forget who used the analogy of feeling like their ear was filled with cement but that’s pretty accurate. Slowly, it’s improving. You’ve gotten good advice above & I hope it resolves soon! Happy healing to you!

I hope that it goes soon, can’t add any more to the advice, but still praying for your healing

I hope you got the Toradol. I did not have it for ES but my husband recently had an injection while in the ER for a kidney stone. It was far more effective than the morphine they gave him when he first arrived. He was in in extreme pain.

His doctor also prescribed it in pill form for 5 days while waiting for the stone to pass. It never did and he had to have surgery but the Toradol was an absolute like saver for keeping the significant pain at a somewhat manageable level while he waited.

Hopefully you are feeling better by now.

How did your suture removal go & how does your surgeon feel your healing is going? I hope your pain is reducing & you’re feeling much better now.

Hello just writing to touch base and see how the removal of your stitches went and praying that you are feeling better over all especially your ear.

When I went to Yale on Wednesday they checked both ears and said that there was no ear infection or any obstructions in the ear. They said that all the pain was from the surgery and that it’s the scar tissue and inflammation that is pushing into my ear and causing the pain. On a second note I had shots the same day when I came home from Yale I went straight to my physiatrist and she gave me two shots Toradol. I thought that they had worked at the end of the day and then I woke up the next morning in the same amount of pain . I’m supposed to go back tomorrow on Monday to have a second round of shots done but I’m just not sure because I feel that it’s pointless because it’s not doing anything for me.

The suture removal went well my only complaints and problems are with the pain that continues.

So sorry that you’re still in pain, praying that it eases soon. Not good that the Toradol didn’t help either…

I know you said you’re done w/ taking so many meds (in another post) but has anyone Rxed a nerve pain med for you? There are many different types & it can take several months on one before it kicks in. If one doesn’t work, often another will. Would be worth talking to your doctor about this. We do have members, including Jules, who continue to take a nerve pain med post op to ease pain from nerves that never fully healed.

Honestly, I have a hard time believing you would have already built up enough scar tissue from the surgery for it to cause the pain you’re in. If it’s left over from your accident, that is a possibility. Also, if it’s scar tissue causing the problem, scar tissue can be debulked surgically or via laser therapy & sometimes even massage (not comfy but it works). You might want to see about getting more definitive info regarding the scar tissue - i.e. is that really the problem or was it just the easy answer you got. There are scans that can show scar tissue’s presence.

Hi yes I have had tordal shot it help alot and had no side effects and I am super sensitive to strong pain meds.

How is it now? Hope it has subsided by now?..

I had my follow up on Wednesday last week which was I believe was June 1. My ear pain is much better now when the doctor looked into my ear
He said that because of the swelling it’s still retaining water or whatever the liquid is. He recommended Afrin. And he said try it for three days only two in the morning and two at night and it definitely helped a lot.

So pleased that your pain has improved, have been thinking of you & still praying. Good news

You must be so relieved to be noticing your symptoms reducing as you heal! That’s what I hope & pray for for all our members!