I have posted a couple times in the last several years about my battle with different doctors, dentists, oral surgeons, endodontists etc. Today I finally went and saw another ent Dr in Dallas, Teresa Chan-Leveno. After explaining my years of struggle, and how the last CT that was specifically suppose to be to look for Eagles and the radiologist didnt even mention them in the report or measure them. She said she can measure them. She looked at the CT scan and said that mine is really rare because she can see a lot of calcification that is in a line but it looks like pebbles instead of the normal spike she normally sees. Also have a lot of calcification in my parotid glands but she said she wouldn’t touch those. So she immediately only spoke of surgery (no meds etc) and said she would do an exploratory eagle syndrome surgery. She said basically she will do the incision outside the neck and will have to explore to get all the pieces out, take out the ligament, and check my styloid while she is in there. As she went over some of the risks it makes me very nervous but I am so tired of the chronic pain I have had since 2011. I have struggled to find a doctor who would listen and not just throw more muscle relaxers etc at me for so long. However for people in the Dallas Ft Worth area she told me she does more of these surgeries than anyone in the metroplex. She said even if it’s just 3 per year that it’s more than anyone else does. I asked about complications other patients have had with surgery and she said she has only had one that had first bite syndrome but it subsided on its own eventually. My surgery is scheduled for July 18th, she said she’s booked that far out.

This is great news! It sounds like Dr. Chan-Leveno knows what she’s doing. Even though there are 2 approaches for ES surgery (intraoral or external), I am a proponent of the external route. I had 2 ES surgeries through my neck w/ both my styloids being shortened & stylohyoid ligaments being removed. My pain & other symptoms are 98% better even after 2+ years. My surgeon made the incisions in my neck along natural crease lines so unless I point them out, they are basically invisible.
Be aware that it does take a couple of months post op to start really feeling back to your old self again. ES surgery is major surgery even if the incision doesn’t seem very large. You will need to take it really easy for a week or two after surgery & then VERY GRADUALLY work back into your regular schedule. Too much too fast will keep you in a world of hurt & will slow your recovery.

Thank you for the information! I am very nervous about the complications of surgery but at the same time I am excited about possibly feeling remotely close to my old self again. The Dr. also said I will have a drain outside of my neck that could possibly have to go with me over night. She will be performing the surgery as an out patient. I am just saying lots and lots of prayers that it will be a success. Did you have a lot of inner throat swelling with the external approach?

So glad that you’ve found someone to help you!
I had external surgery as well, and I had a drain put in to alleviate the swelling, which really helped. I was pretty numb around my jaw, ear and cheek, and also the 2nd time my hearing was really reduced, but these were all temporary and eased off quickly. Just a little numbness left around my ear, one year after the 2nd surgery, but it’s well worth it!
The first bite does seem to be quite common after surgery, but that does ease as well.
A lot of doctors do monitor the nerves as they do surgery, so it might be an idea to ask if she does that.
There have been other members who’ve had nobbly styloids or pieces like yours. I’m sure it’ll be good to get them out! Hopefully the time will soon pass until your op, there’s lots of info about what to expect in the ES Info section or you can search past discussions if you’ve not seen them already.

Thank you Jules, I have been stalking all of the discussions tonight lol. After all this time and surgery is finally a reality, I have to admit I’m a little anxious about it. So glad I have this forum to be able to see others experiences and ask questions. It’s great!

Hey, I don’t want to hijack this thread but can someone go into more detail about the differences between intraoral and external surgeries?

Wonkly, check out the Newbies category. Jules spent a lot of time consolidating information from the forum about various Eagles subjects. There’s a section on surgery that gets into the differences and pros and cons of each.

Sorry, should have checked there first. Thanks.

My surgeries were also outpatient, but unlike Jules, I had no drain put in. Dr. Samji prescribed a course of post op prednisone to help combat swelling. I had much more throat swelling after my first surgery than my second because my first surgery was a bit more complicated. There are things that a surgeon can’t see/know until (s)he has you “opened up”. I had a nerve wrapped around my right styloid which had to be unwrapped a bit so the styloid could be shortened. That caused the surgery to take longer & probably was the cause of the extra swelling in my throat & neck post op. The post op period after my second surgery was “a walk in the park” comparatively. We are “fearfully and wonderfully made” (Ps. 139:14) so each person’s physical “layout” is unique & thus we keep our surgeons on their toes!

Praise Yah!!! I am so glad that you are finally going to have your surgery. I know how much you have gone through with all the doctors you have seen. I suffered for 17 years and I never had a diagnosis for all that time. It was a life of “Hell on Earth”. When my physician at OU Medical in OKC finally found ES, that was the beginning of joy. My life changed drastically and I had a life free of pain,.

It is so hard to have this “devil” called, Eagle’s Syndrome. Had it not been for me holding on tight to the Father’s hand, my life would be nothing, but darkness. I will be praying for a good result for you. It is a hard surgery and it will be a process…Stay calm and pray allot. After I had my surgery, I had so much pain, but I had some praying girlfriends who would speak prayer over me.

You will need a strong “spiritual” support system to get through the times you feel like you made a mistake, by having the surgery. I went through the same thing and it was then that my girlfriends spoke healing into me. I am a diabetic so, I healed very slowly.

And one thing you do have to be open about is…take care of any business that you have to take care of. For me, I had two young sons and a husband. We had to have the talk and he did not want to even think about what could happen. The area is a very sensitive area and things can go wrong. This is a hard surgery. For me, it was a win/win because if I did the surgery, I had hope that I would get better. If I did not make it, I would be in the hands of the Father. I was that miserable with the ES.

I only hope to encourage you and I will speak truth as to where you are at the crossroads of your healing. Keep us informed of your progress and God’s speed.

So glad to see this post! I am in West Texas and saw that she preformed these surgeries and was wondering how experienced she it. Thanks!

Here is what I found online about her online before I saw her. 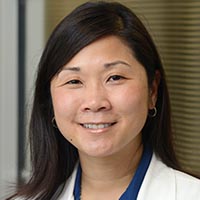 Hey Shanna_W - I just realized your surgery is today! Please let us know how you feel post op & please ask questions if you have concerns about post op pain, etc. You will find ice & sleeping w/ your head very elevated for several weeks to be your best friends. We recommend a wedge pillow w/ other pillows on top of it to elevate it further. Bed, Bath & Beyond sells a decent wedge pillow. Jules also recommends a “V” shaped pillow for further neck support. Follow your doctor’s pain med guidelines closely & move back into your regular routine ever so slowly even if you feel good. Hurrying back into “life” too quickly will set you back both in the pain & healing arenas. Plan to rest & take things very easy for at least 2 weeks w/ an eye on the 2 month mark as a time when you’ll really feel much better.
I will say a prayer for you today that all is going well & your healing will progress without a hitch.

Hey Shanna_W
I’m seeing Dr. Chan-Leveno in Dallas tomorrow and wanted to check in with you to see how you have progressed since your surgery. Wondering if you had any complications that should be discussed or whether you even ended up having her do your surgery? Also whether you had bilateral or just one side?

In case Shanna_W doesn’t reply, I copied this excerpt from her last post which was in Nov. '17 - “…I was suppose to have surgery but backed out. I am waiting until it’s do or death I assume before I take the risk.”

It’s possible she’s had surgery in the meantime but she hasn’t posted about it if she did.

Hi I just received an email with this post that you were seeing Dr Chan. Please let me know how your appointment went.