I’m scheduled for surgery next Wednesday! I’m nervous but also ready to get this stupid thing out of my throat. It’s literally… A pain in the neck.

I’m having a tonsillectomy first, then the left styloid shortened through the intraoral route. Hopefully the recovery won’t be too terrible, and I’ll be done with the neck, shoulder, throat, and chest pain this thing has caused me.

Did anyone ask their surgeon for either a picture of the styloid, or to have it in a jar to take home? I know it sounds weird, but I want to see the little thing that has caused so much pain.

Any final words of wisdom or advice for surviving the intraoral surgery/recovery?

I’ll keep you posted and if it goes well I’ll add my doctor to the list!

We'll be thinking of you, gopher! I hope you get the best possible outcome.

CONGRATULATIONS! I had mine out last Wednesday and it’s the best thing I ever did for myself. Mine was intraoral as well without tonsillectomy and as much as the surgery hurts the first question I’m going to ask the doctor is when they can do the right side. I am noticing new things it has caused everyday. I did ask for pictures or the bone itself the dr said they could not give me the bone because at the hospital I had the surgery at everything has to be sent to pathology, they do however film the surgery and the dr gave me 4 great pics. I’m sending you a friend request we can recover together.

Yes, I too am having last minute jitters. Two weeks for me.

I am going to ask for my stylohyoid, too.

Hope it all goes well for you gopher. All the best. Keep us posted.

I was shown the picture. I had the intraoral surgery...... in 5 days post surgery I was eating pizza..... small bites, chewed super well, but still I was eating pizza !!!!! My surgeon took a video but I didn't see that! lol. Didn't really want to.

The first couple days I ate soft foods. Pudding, ice cream, scrambled eggs, lukewarm soup. Well cooked macaroni with just butter on it. Applesause. By the 5th day I wanted something more substantial..... so I tried the pizza. The worse pain was the pain I got in my ear. It was excruciating. That lasted 3 days. I put heat on it and it felt better.

I stayed overnight because of the intraoral surgery ..... and because the surgery is so "RARE" the dr came in the next morning to release me and was accompanied by a dozen interns with mini LED flashlights..... each hoping to get a peak at the inside of my mouth/throat!!!!! It was my 15 minutes of fame. lol. I had both sides done but in separate operations 2 months apart.

Best of luck, the relief is enormous!!!!!

If you can please have your Doc try to take it all out I wouldn't recommend leaving any part of it - I myself had mine trimmed and although I feel SO much better I can at times still feel the styloids messing with my throat. not that painful just awkward.

yes I also was able to get a picture of the tips that were cut off however they would not let me keep them- they were sent off to the lab. Check it out... 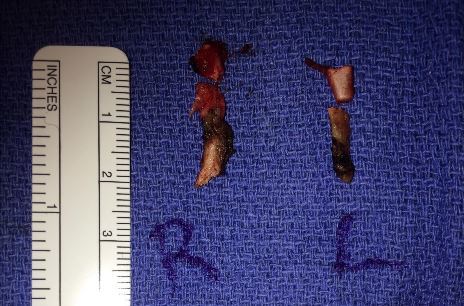 My surgeon took out 3 1/2 inches. He said he removed the entire bone. Don't leave anything behind!!!!

I would be afraid they would start growing again.

They are not supposed to grow back and I have not heard of any cases of growing back but like I said there are still issues although minor. I would press hard to get them completely removed

Thanks, everyone! It’s so great to hear that the surgery works and that I can hopefully expect some relief soon. I will let you know how it goes!

I asked my surgeon to take a picture. I have it. I make copies for other doctors so they can at least see that I had something in my tonsil bed. My doc actually took six pictures of the surgery and closure. The last one being a picture of the partial styloid on a cloth next to a ruler, just like some of the others you see.

Best of luck to you gopher. I wish a pain free future for you.

I agree gopher, thanks all for your input.

Gopher. Some tips on the tonsils. Biotene spray was my best friend. My throat got really dry afterwards and this really helped. GL on surgery. Had mine out a year ago, but through my neck. It ended up not being what was wrong:(

I will be thinking of you on Wednesday, sending thoughts and healing energy your way. My best advice to you, as I have been through the surgery myself - do your best to stay in the moment from now until the surgery. Keep your mind in a positive place. Affirm to yourself that you are strong, resilient and an Eagles warrior! The truth be told, I walked out of that surgery in less pain than I did walking into it!

You'll do fine, I promise :) We're with you, by your side, flying high right there with you!!

Strength be with you,

What was it after all joyee?
joyee said:

Gopher. Some tips on the tonsils. Biotene spray was my best friend. My throat got really dry afterwards and this really helped. GL on surgery. Had mine out a year ago, but through my neck. It ended up not being what was wrong:(

Good luck tomorrow a Gopher it is the first day of the BEST of your life. Mine was 2 weeks ago tomorrow and I scheduled the right side for April. Be excited and not nervous!

Sending out positive thoughts and prayers for your surgery tomorrow :)

Hoping you get relief and have a speedy recovery!!

Thanks for all the well wishes! Surgery went well, and despite having a good bit of surgery pain (tonsils), I do feel like the ES symptoms are practically gone! I was able to turn my head after surgery and it didn’t feel like it was “stuck” like it always has. Hopefully the tonsil pain doesn’t get much worse… I sit and watch the clock waiting for my next dose of pain meds. Otherwise, feeling pretty good!

What great news, gopher! Thanks for the update.

Is the swallowing pain similar to a bad sore throat? Or is it sharp, cut-like.

Sounds like the surgery was the answer. So glad you were able to get in and get it done. Take care.