Briefly: I’ve seen 4 ENTs and countless other docs in the four years I’ve been dealing with this. My symptoms are very similar to many of yours but despite multiple scans (incl CT with contrast), I haven’t been diagnosed with ANYTHING. Recently I had a panoramic X-ray done as part of my routine dental care and I asked the dentist about my styloids. He was familiar with Eagle’s but (like all the others) said there was no evidence of ES.

The only thing that anyone can find is that my cervical spine is reversed in its curve. It’s pretty extreme. I’m not a medical professional and I can see it as clear as day on my CT and other X-rays.

I’m scheduled to have an MRI this weekend to look for possible nerve problems (pinched nerve, nerve root irritation.

Generally, symptoms include burning, stabbing pain in throat, ear pain, jaw pain, and lump in throat sensation, tinnitus, among others.

My question is this: are there any other conditions that mimic ES without elongated styloids?

As always, thanks for your insight and support! I’m so grateful for this site and all of you!

I’m not sure if there are other things that mimic ES, but we have learned that it’s not necessarily the length of the styloid that causes problems. Excessively thick or steeply angled, shorter styloids can also cause symptoms. Calcified stylo-hyoid ligaments w/ normal length styloids can also cause ES symptoms & are in fact considered ES.

There’s info in the Newbies Guide about other conditions similar to ES, if you’re able to have a trawl through that! The sensation of something in your throat is called ‘globus sensation’, although there’s not always a cause found for it- here’s a link: https://patient.info/health/globus-sensation-leaflet .
Some of the symptoms you describe could be glossopharyngeal neuralgia, geniculate neuralgia, and trigeminal neuralgia, and there’s other causes for them other than ES, and again, there’s not always a cause. Obviously we’re not doctors, but what concerns me is that in your case the curve in your spine could be causing all sorts of problems, including with the angle of the styloid processes. There’s research in the Newbies Guide again which shows that it’s not always elongation of the styloid processes causing problems, but the angle of them, so it could be that because of your vertebrae being at a different angle to ‘normal’, it’s altering the styloids and bringing them into contact with nerves. If they’ve just evaluated your CT for SP length, and not taken angle into account, they could be missing something…
MRI’s aren’t great for showing the styloids themselves, but they hopefully will show the nerves so you hopefully might get an answer. There’s info on the Ben’s Friends Facial Pain site about FIESTA MRI, which looks in minute detail at the nerves and the base of the skull. Not sure if that’s at all possible to get done? You can browse the BF’s site without joining if you want, you might find their site helpful too. Here’s a link: http://www.livingwithfacialpain.org/
So it may be you can’t rule ES out completely yet… Let us know how you get on with your MRI.

Thanks! I’ll let you know what I find out from the MRI. I’ve looked into the neuralgias and it seems like there are a lot of overlapping symptoms with ES. I’m hoping the MRI can show whether it’s GPN and/or TN.

I’m attaching a screenshot shot of my most recent X-ray to show my cervical spine issue. Note that the pic on the left is what a healthy spine should look like and then there’s mine (on the right). 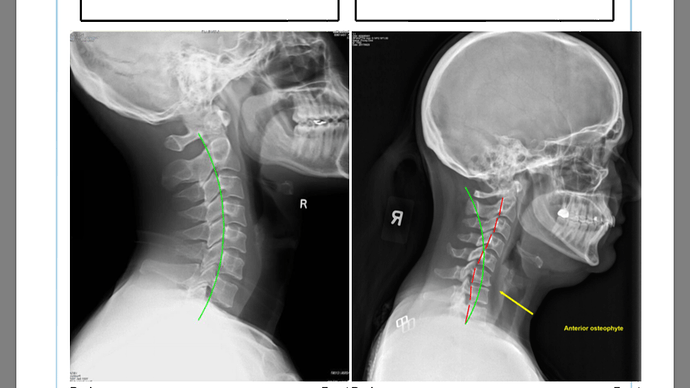 WOW, Chrissy! Did you have a neck injury of any sort that would have caused the change in your neck curve? Has anyone suggested physical therapy to help work at getting the neck curve back to normal? I agree w/ Jules that having your neck so far out of whack could be causing lots of different problems/symptoms. I hope you’re able to find someone to help with your neck as fixing that might alleviate most if not all of your symptoms over time.