I’m posting this because it could help someone else on their journey for answer.

First, I do not have Eagle Syndrome, confirmed by 3 doctors and a neck CT. I do have hyoid bone syndrome. My right greater horn basically touches the cervical spine. My ENT did not feel my HBS was causing the amount of pain I’m having so I was sent to a neurosurgeon. He ordered a Fiesta brain MRI with contrast. I was found to have arterial loops abutting/compressing the trigeminal, vagus, and glossopharyngeal nerves on the right side. So a Microvascular Decompression surgery is being recommended.

I’m wondering if anyone else has experience with vascular compressions and the amount they cause versus amount of pain HBS can cause. I will eventually need 2 surgeries. I’m just trying to figure out which one to do first.

Anyone have experience with HBS pain and/or pain from vascular compressions?

I don’t have personal experience with either condition or surgery, but I think neuralgias caused by vascular compressions are way more common than any problems with the hyoid bone or styloids. The microvascular decompression procedures are more common and established, and if the symptoms match up it would seen that it would maybe be a more likely solution to your pain. Just my $.02!

Well, sort of good news that the FIESTA MRI has shown vascular issues, hopefully that is the cause of alot of your pain, good you’ve found out before hyoid bone surgery…I can only recall one member having the MVD, if I remember right the surgery didn’t help much as it was ES causing the pain, so she still needed the styloidectomy, but your situation does sound different. Ben’s Friends have a facial pain group, & there’ll be info about microvascular decompression surgery if you have a look, here’s a link:
Living With Facial Pain - Support Community for Facial Pain Diseases - Trigeminal Neuralgia (TN) and Glossopharyngeal Neuralgia (GPN)
I’m sorry that I can’t give you any other advice, but probably the other group will at least give you info about what to expect!

Thanks Jules. We know Eagle’s has been ruled out in my case. So I have HBS and as well as neuralgia due to compression of nerves 5, 9, and 10. I’m sure there is some pain related to HBS but many of my symptoms are consistent with vagus nerve irritation. Thanks for the link.

Are the symptoms of compressions caused by blood vessels in the brain different than those caused by elongate styloids? Seems like it’s the same nerves involved.

I know in your case styloids are not a concern. I just wonder if those who do have elongated styloids might need to consider compressions by blood vessels before assuming it’s the styloids. Or maybe the symptoms are different?

Well, at last you have confirmation of what could be causing your symptoms on your right side. Well…I think I have Jugular compression which is by definition a vascular compression but I do not have arterial loops compressing my nerves so in that sense I do not know how that feels. I think most of the symptoms you were complaining about could be attributed to these nerve compressions. Not a doctor but my humble opinion is, only clicking and swallowing could be attributed to HBS though one can argue that swallowing could also be affected by GPN nerve as it affects the tongue. So I would say have the MVD first and see what resolves and what does not.

I had a couple of loops noted on my right side. A “type 2” arterial loop across the vestibular nerve along with a petrosal vein at the “root entry zone”. Also the glossopharyngeal bundle had an arterial loop across it.
I spoke with 2 neurosurgeons in Canada, they didn’t want to do the surgery. The last one I spoke with said he would give mvd surgery a 40% chance of working.
I also spoke with 2 American neurosurgeons who said mvd surgery was worth a try. One of the surgeons explained that the vein abutting the vestibular root entry zone is concerning due to the lack of myelin sheath in this area. However he wasn’t able to say for certain this is what is causing all my complaints. There isn’t any great deviation seen in my nerves.
I opted to try styloidectomy first. It seems to be far less invasive and far less scary. MVD surgery does not sound like a good time. 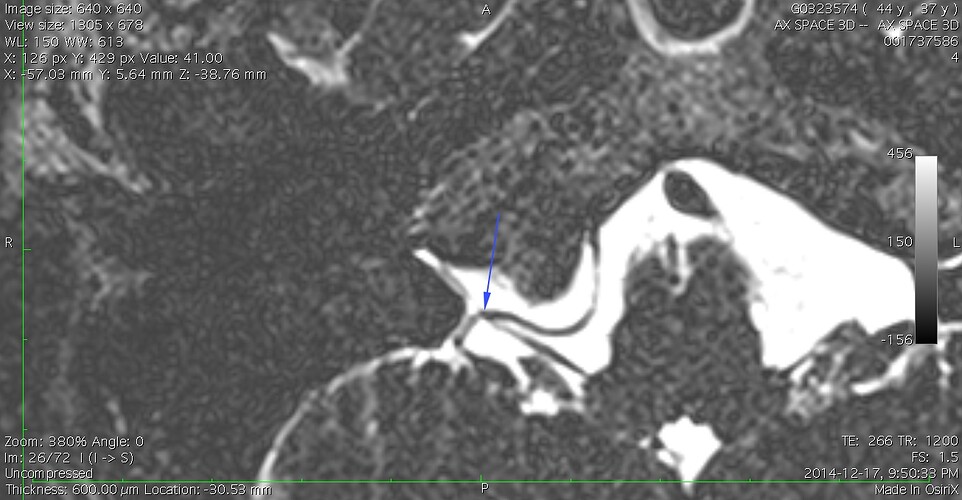 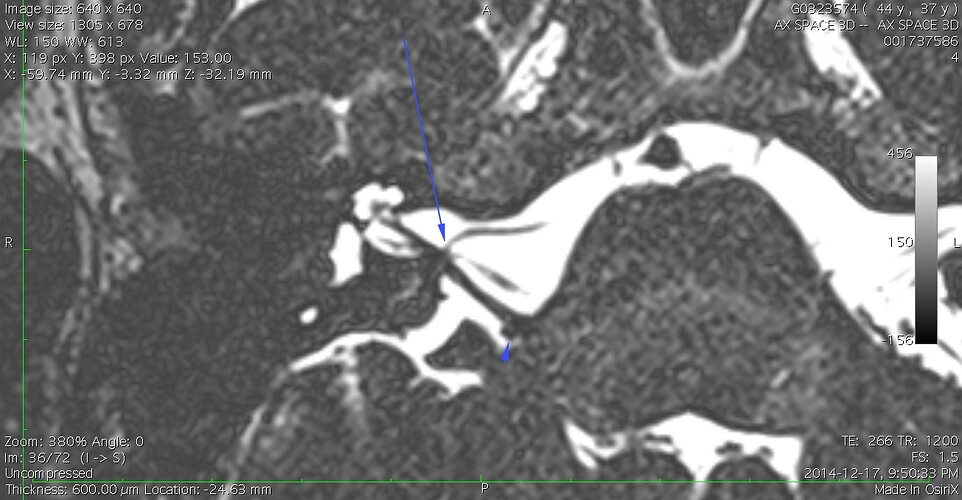 @Ladybug I think most of us went through a lengthy process of ruling out any other issue before getting ES diagnoses. I have had multiple Brain & Neck MRIs/MRVs, CT/CTA Scans, Ultrasound, Catheter Angiogram…to name a few. I even had genetic testing to rule out a rare genetic disorders that affect hearing and brain. So if I had vascular issues in the brain, it would have been caught in the many FIESTA MRI sequences similar to the one that @1speechpick & @boogs99 had.

@vdm This is a FIESTA MRI. No contrast.

At a private centre?

@vdm, No, at my local hospital.

Thank you all for your input! I think it’s so important to put this information out there, especially for those whom are still searching for reasons for their pain. I so appreciate each of you weighing in with your opinions.

@boogs99, thanks for sharing your photos. Did you have elongated styloids? If so, how long were they?

To review my story in its entirety. I’ve been sick for close to 2 years with Gi issues, facial/throat, and vagus nerve type symptoms. Test after test turned up nothing except “mild gastroparesis”. I finally went back to neurologist and told him, “we have to keep searching because things just keep getting worse”. At that point he had a suspicion for Eagles’s. He ordered a neck CT and sent me for ENT and neurosurg consults. The neck CT was read as “normal” but the ENT found an elongated hyoid bone on the right. However, he didn’t think that would cause the extent of pain I’ve been having. They confirmed I don’t have Eagle’s syndrome. I went to the neurosurg consult and he thought the pain was “neuralgia-type”, so he ordered a Fiesta brain MRI with contrast. That’s where the arterial compressions of the trigeminal, vagus, and glossopharyngeal nerves were found. The AICA is compressing the trigeminal nerve, and the PICA is compressing the vagus and glossopharyngeal nerves

Here is an image of the right posterior inferior cerebellar artery (PICA) that is abutting/compressing the glossopharyngeal nerve and vagus nerve (I think I got the right shot). I wasn’t skilled enough to find the trigeminal nerve compression. 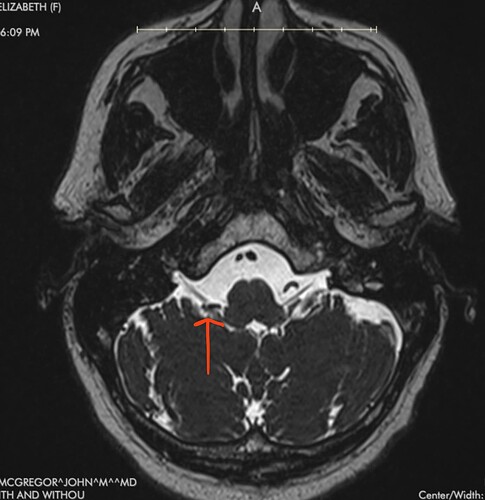 I had 3 different ENTs confirm “no Eagle’s”. I’m doing the same thing with neurosurgery. You definitely don’t want to rush into an MVD with the first person you meet. I’ve had 2 different neurosurgery opinions so far, and they both agree that Glossopharyngeal Neuralgia is my biggest issue and that it can be fixed. I have 2 more opinions scheduled for later this week, and then I will have to make a decision. I need to do something pretty quickly as the symptoms are pretty debilitating.

Thanks to this group, I’ve learned to dig, study, dig some more, and ask a TON of questions. One thing I learned in digging, is that some neurosurgeons sever the glossopharyngeal nerve. Sure that stops the pain but there is a significant risk of post-op swallowing problems.

Never stop searching for answers for your pain. It can be pretty important to get more than one opinion. Thanks again to this group for what you do!

Glad you seem to be moving in the right direction! Just as a side note for the curious (and not squeamish), there are some really cool YouTube videos of microvascular decompression procedures. Really fascinating stuff to watch!

@1speechpick The styloid I had removed was 3.5 cm. The doctor that removed it was more concerned about jugular compression than anything else.
I think “typical” trigeminal neuraglia, with distinct shooting pain to the face, along confirmation on MRI, one can feel pretty confident about the diagnosis. Same with hemi-facial spasm (compression of the 7 nerve), with the telltale twitching of the face. The other cranial nerve symptoms seem to be a little more convoluted, in my opinion. Hence the reason I opted to try the styloid removal.
Sounds like you are seeing all the right doctors.

That makes sense!! My styloids were only 1.6 cm and 2.0 cm. So actually they were very small. Glossopharyngeal Neuralgia is so incredibly rare that I’m not sure there is a “typical”. I’m getting a lot of opinions before I jump into surgery, but an MVD looks like it’s in my future.

I think the procedure has come a long way…at least the success of it. It’s still an incision and drilling of bone, so recovery stinks. You’d think there’d be more of a less invasive approach these days.

@1speechpick There is one thing to be happy about from all of these symptoms and issues. You know the cause of your problem now and at least it took you 2 years, not 10 or more years as some of the folks here. You also know that it is not tumor or cancer or any other life threatening disease that is causing all these discomfort. You also learned to advocate for yourself and gained tremendous knowledge in the process. This advocacy is so critical and no-one will do it for you as I learned the hard way.

Now, you need to think about the strategy to confront these surgeries and in the meantime focus on mitigating the pain from the neuralgia through medications and life style interventions. I would say do your research on best doctors with best success rate in these types of surgeries. I really do not know much about MVD but as @boogs99 alluded, there seems to be bit of concern regarding their success rate vs the invasiveness of it. I assume this is not a simple surgery as it involves portions of the brain.

Lastly, regardless of where these nerves are compressed (by styloid or by other organ be it vascular or tumor), the symptoms would be somewhat the same so the suspicion by the neurologist on ES was warranted but turned out to be something else. I did think at some point that too given your symptoms. But like any another science, we are also ready to change our understanding of something when new evidence is presented to us. I wish you the best in your journey to seeking a final solution to your problems. I think half of the battle is done and the rest would hopefully be ok.

@KoolDude I completely agree with you. And thank you for the kind words. Thanks to you and this group, I’ve learned a ton!!! And you’re right, there’s a lot to be thankful for when you’ve found an answer.

From my symptoms, I had a very high suspicion the vagus nerve was involved. I ended up being right. I’ve done medication trials and that didn’t go well, so I definitely need the MVD. It’s a matter of when and with whom. I will get several consults before a final decision. I’ve already had 2 consults. Glossopharyngeal Neuralgia is definitely an issue. One doc said I do have trigeminal neuralgia and the other said I didn’t. So more info is definitely needed. While they are in there, I want everything fixed that needs fixed. However, there’s no sense to touch a nerve that doesn’t need intervention!