After my latest doctors appointment

So I just got done seeing my local ENT after having a new CAT scan done on my neck.

Here’s the image after I put it through the Slicer program: 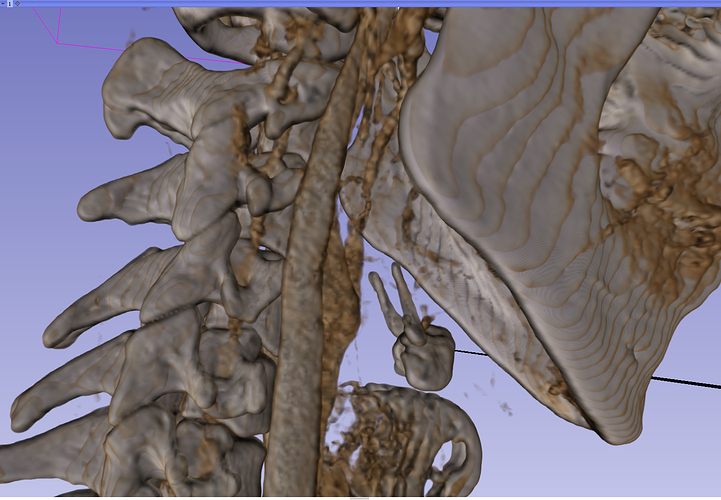 Note that on a previous surgery I had the greater horns of the hyoid resected because they were thought to be causing compression symptoms. But, as you can see, the stylohyoid ligament was untouched.

I asked the doctor whether he thought the stylohyoid ligament could be causing the pain I’m experiencing. He said it’s possible but the only way to know would be to do the surgery and see if it helps. He also felt that doing a repeat surgery would be risky because of the scar tissue and potential for injuring a facial nerve.

“The styloid processes are unchanged from the prior exam measuring 20 mm in length left and 19 mm right. Ossification of the hyoid and of the ligament is also unchanged but somewhat prominent measure the up to 17 mm.”

I continue to have a lot of pain in my throat area, around my hyoid bone and under my tongue.

I’m considering going to a bigger medical center where people have more experience with rare conditions to see if they’d feel confident removing the stylohyoid ligament.

I’m just trying to get all the information I can to see whether a calcified stylohoid ligament of this size could be causing my symptoms.

None of the tests conclusively showed vascular compression, but the tests don’t show everything.

Do you think it’d be worth considering removing the stylohyoid ligaments?

Calcified ligaments causing symptoms is one of the causes of ES, & should definitely be considered for removal during surgery, they can cause symptoms without elongated styloid processes, so you’re right in that.
Having revision surgery however is more risky, so it’s a difficult decision to make. Only you can judge whether the pain you have now is affecting the quality of life so much that you want to have more surgery, as there are risks. If you did decide to go ahead, there are treatments which can help with scar tissue ( MusicGeek has had this & found it helpful, here’s a link to the discussion: Are there any saxophonist or wind musicians out there? )
If you do think you need more surgery, would you be able to travel to one of the really experienced doctors, like Dr Samji or Dr Cognetti? I think you can send your scans to them to be looked at without having to travel to see them. There’s info if you search for it about what Dr Samji needs by way of scans etc.
I’m sorry I can’t be more helpful…

You’re only about 4.25 hours from Dr. Samji’s ofc driving time. You should send your CT scan to him & have a phone consult (there is a fee). I would guess that he would be willing to do the surgery. FYI - He is going to be out of his office for about the first 3 weeks in June on vacation. There are many Air BnBs & VRBOs in this area which are more affordable than staying in a hotel should you decide to come see him.

There is also a doctor at UCLA Med Center - Dr. Chettri - who apparently does ES surgery but no one on this site that I know of has been to see him yet.

I just had surgery with Dr. Samji a week and a half ago. I previously had jaw surgery in 2015, so Dr. Samji said I would have a lot of scar tissue, but he was willing to do the surgery anyway. He told me my scar tissue was “impressive.” He had to break the bone in pieces and basically take it out little by little because it was so wrapped in scar tissue. So scar tissue isn’t the greatest thing to work with, but doable, and Dr. Samji was willing.

I’m glad that you were able to have surgery with an experienced doctor, & hope that you heal well & soon feel the benefits. Did he offer any suggestions/ treatments for healing this time without getting any more scar tissue.
Sending you a hug

It took me 17 long years of pain to finally get a diagnosis! It was a very long journey. You seem to be having the same kind of pain I was having when I finally got diagnosed by Dr. Greg Krempl at OU Medical in OKC. (BTW he is on the list of doctors on this blog) Call it a miracle or, plain luck that I ended up at OU. It was a relief to finally know that I was not depressed, crazy, or that I was imagining things. That’s what doctors say as they kick you on down the line. I was sent to dentist’s, other doctors and counseling…the pain subsided sometimes but, at the end of the day, the problem was still there. It was horrible! It was life in hell! Once I was given the diagnosis then, it was time to do the surgery. The only thing I can say is, I had to totally put my whole life into the hands of my Creator. Because I suffered so much with this “devil” (ES), I had prayed and prayed and stayed close to God, I knew that whichever way this went, it would be being with Him, or getting the healing I so desperately needed to have some quality of life. That’s how I had to look at it. I chose to have the surgery…and I was at peace with that. After I had the surgery, it was so painful and I thought I had made a mistake but, through praying friends and my own prayers, I started to feel better. It was a process and Praise Yah I got through it. I am a Diabetic and it takes longer than most people to heal. I slept on the couch propped up and it took about 4 months for me to finally heal. I lost 40 lbs. in the process. Note: salivary glands go berserk when you have this surgery because once you have the surgery, everything is so raw in your throat. I just went around with a towel to get rid of the excess saliva for about a month. Inconvenience but, part of my process. Once I got better, then there were tears of joy the first time I was able to enjoy a small McDonald’s burger and not worry about feeling that something got stuck in my throat like a bone or whatever. Because you suffer with this, there was residue of the “fear” factor for a while. Eventually, you overcome the fear but, you will never gulp down your food. You will chew, chew, chew before you swallow anything going down your throat! You are more careful and it’s just because we have had to deal with this ES monster. I just want to encourage you to consider the surgery and look at it like I had to. Risky? Yes but, your life will be better and you can have a better quality of life. Pursue your healing with everything you have. Blessings…

Unfortunately, no, he didn’t say anything, but I’m trying the supplement Bromelain this time. I’ve heard it helps with wound healing, deep tissue scarring, and adhesions.

MusicGeek posted about cold laser therapy for scar tissue, maybe worth looking into?

Glad you made the trip to see Dr. Samji. He’s the best on the west coast. I hope you have a quick recovery! So glad the scar tissue didn’t prevent thorough styloid removal.

I think I’ll send my scans to both Dr Samji and Dr Cognetti.

The symptoms I’m having definitely seem to correlate better with a vascular compression phenomenon than just nerve irritation, though I have that as well.

I still have episodes where I think I’ll pass out, or I’ll have heart palpitations.

I know we’re just amateurs here, but are the vascular symptoms anything to worry about given the images I posted here?

I’ve definitely expressed my concern about vascular compression with several different doctors and they don’t seem to think there is anything going on in that regard.

I’ve had not only multiple CAT scans, but a recent MRI/MRA and carotid ultrasounds.

None of these tests seem to show vascular compression issues. I guess I should be reassured?

Could all these tests be normal and still have vascular compression that is not being detected?

Hi jrodefeld!
In answer to your question, yes, you can have normal MRI/MRA & carotid ultrasounds & still have vascular symptoms because often the symptoms only occur when the vein/artery is being compressed which may require your head/neck to be in particular positions. If your head/neck are not in those positions during your scans/tests, then vascular compression most likely won’t be apparent & thus the scans appear to be normal.

I can’t speak for Dr. Cognetti, but Dr. Samji does not believe in “Vascular Eagle Syndrome” as a separate entity from Eagle Syndrome. Vascular symptoms are just part of the range of symptoms that fall under the umbrella of ES. I had vascular symptoms - blood pressure drop, heart palpitations, light-headedness when I did hard aerobic exercise & ultimately had a terrible cycling accident which may have been due to my vascular symptoms (but that’s another story), & after some discussion w/ him chose to accept his approach & not try to convince him otherwise. He is an outstanding surgeon w/ a great bedside manner. He is quite well respected in the medical community in Silicon Valley & perhaps beyond.

Do be aware that phone consultations w/ either doctor run in the $600 plus range. Your insurance may pay for one, but you’ll want to check to see if two consults would be covered before you commit to them.

I hope this is helpful to you.

@jrodefeld My carotid ultrasound didn’t show anything, but Once in surgery it was a different story. I found that the young tech who Did the carotid ultrasound was solely looking for cholesterol. It’s a bit maddening. Hang in there, it will get better.
Something to note; when I had the carotid ultrasound I became very sick afterwards - so that should have been a sign. My first scan was an MRI of my head. The X-ray tech had scanned someone with Eagle Syndrome before. The sign of impingement in that test, looked like littlle distant paintings of seagulls to me. Sort of like a ‘V’ that is stretched out to be ‘wings’ in the brain. My scan is bizarre looking in the brain anyway lol. I just recently found out it’s because I have perfect pitch. Who would have thought it could be seen in a scan?
I’ve been laying low avoiding the forum. My Hippa files were finally delivered to my doctor nearly 18 months after the first surgery. Apparently both my jugular and my carotid on the right side were damaged, so I have to keep my blood pressure lower than others for a bit. It’s supposed to all heal. I was an unusual case since the right ES bone had been fractured by a seat belt.
It’s amazing how it’s all healable. It’s slow but it’s happening. Cold laser is extremely helpful. Cold laser breaks down scar tissue and coaxes it to absorb into the muscle. The side effect is that the scars on my neck are barely visible because those scars broke down as well. It’s a slow process, but it works. I told my doctor she ruined my street cred