What do you think of these CT scans?

I posted a discussion a couple weeks back and I appreciate the feedback I got. I wanted to post some more of my scans to see what you all think? I feel extremely strongly that the styloid and/or calcified ligament are compressing the carotids though most doctors I have seen don't seem to see any problem.

As I mentioned in the past, I did have a surgery to shorten both styloids a few years ago, but the doctor that did the procedure was not familiar with the condition and I am convinced he did not remove nearly enough of the bone and ligament. I think he shorten both by a centimeter or so but he left at least 2.5cm of styloid process and another 2cm of calcified stylohyoid ligament where it attaches at the lesser cornu of the hyoid bone.

My own belief is that the calcified ligament is causing a great deal of the compression symptoms and by leaving it there and having it "free floating", so to speak, the compression has actually gotten worse since that initial procedure.

Do you all think that these scans could indicate the symptoms I am experiencing? Especially the vascular symptoms which are by far the most concerning to me. I am very interested to hear your thoughts on these scans.

And finally, is there a consensus top five Eagle Syndrome surgeons in the United States? I live in California, but I would be more than willing to speak with other doctors over the phone to get some real expert advice on this condition. 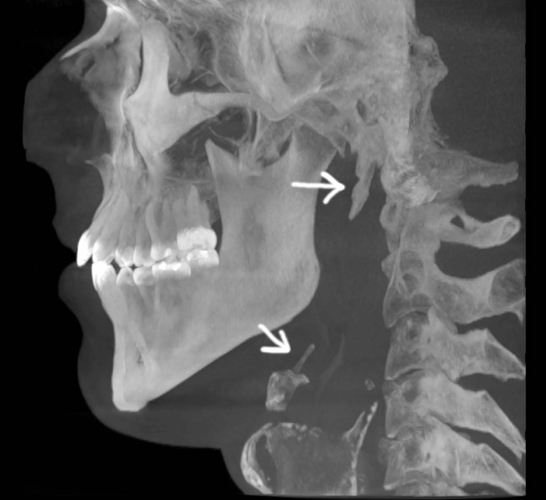 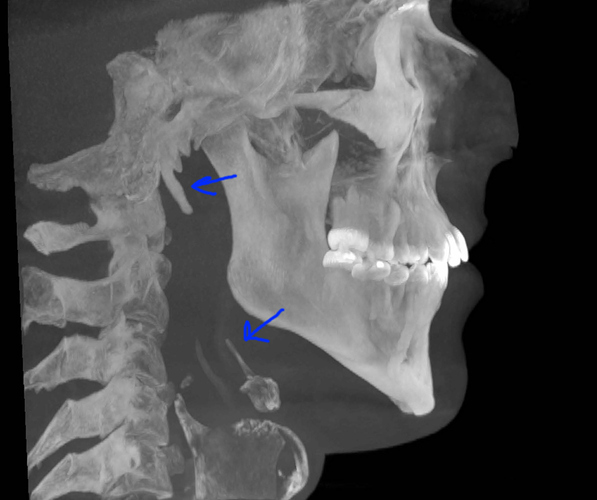 Here are the other two scans I forgot to upload the first time (also posted on my other thread).

One thing to remember----this is ossified cartilage and might not be visible in a CT. They might still be connected by tissue not boney enough to be shown.

I don't think they grow more, I think they just get more ossified and therefore more visible-which appeared to be more growth in mine-but they always felt the same length.

Those are great pics though!

Your pics look like mine pre surgical. Did your symptoms change? Yes this length would cause symptoms. I think I had both the styloid and calcified ligament removed-if its calcified its useless anyway.

My left one was pushing on my carotid artery and drs. thought it might leak when the styloid was removed after 15 years of irritation. It caused a condition called carotidynia.

They should have been made 1cm in length-cut way back to the skull base.

I live in LA and found 2 surgeons who had done it before-one from this site and one by accident. UCLA and Cedars. Let me know if you want info.

I love doctors who upon seeing things in the wrong place say it couldn't cause anything bad.

"first do no harm"

"first do no thing".

It is all subjective…if you are having the symptoms of Eagles and it sounds like you are then they need to come out as it will only get worse. At least that is my experience. Only you know how it makes you feel and it almost drives you crazy at times. You can’t rest and the symptoms are weird for sure. It is always there. Since my surgery…I had the left removed…my pain is pretty much gone. My issues are now my jaw/ear fullness. In my mind it is everything going back to its normal position since it was all getting pushed to the side. It hasn’t gotten worse. Mine was 2.5 inches long, how long are yours? They look really big. It is the oddest syndrome and hopefully one day they will know why it occurs…for now removal is the best option as far as I’m concerned. Good luck in your journey it is not easy to find Doctors that completely understand. Keep looking…you are your best advocate.

did you have any calcification or ossification of the stylohyoid ligaments ? did they remove the ligaments or just shortened the styloid process?

Here are the other two scans I forgot to upload the first time (also posted on my other thread).