For the past 2 years I’ve been dealing with a significant amount of pain in my left ear, in my throat on the left side, and on the left side of my face. I attached a couple of scans that I wondered if anyone had opinions on. On the left side it looks like I have a segmented ligament hanging down from my styloid process but I also notice that the entire styloid process looks much different than anything I’ve seen on this site or in internet photos. I’m working with a doctor now and have an appointment later in the week to review additional imaging and options. Just curious if anyone has seen anything like this? 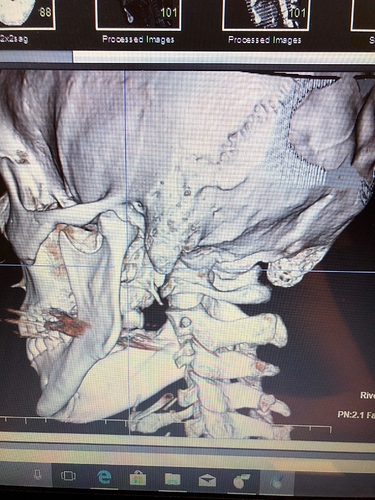 The calcification of the ligaments can form in segments, & also the styloid process can elongate in joints as well. Obviously we’re not doctors, & hopefully you’ll find out later this week what the doctors thinks. It does look like the SP is pointing quite backwards, so if I’m looking at it right, that can cause symptoms depending on what nerves it’s irritating. Let us know how you get on!

To further support what Jules said, my styloid processes looked like they were comprised of little segments & even the section I could feel under my jaw was bumpy like it had ridges (which was explained by the segmentation I saw in my CT scan). My stylohyoid ligaments were also partially calcified & looked like dashed lines coming off my hyoid bone toward the styloid processes. I do agree that in the CT scan pic above there is a very posterior angle to your styloid process. It could just be the position of your head creating that appearance though.

Good evening, thank you for your responses. My doctor sent me a note today saying that the CT scans and MRI’s that they ran last week came back normal. Unfortunately, they did not do a 3D CT scan. I asked if it was too late to do that. I read the notes on the scan. They were put in with a clinical note that they were looking for a malignant neoplasm. I’m glad I don’t have that. I believe that I am on to something with what I think is a calcified ligament and styloid processes that are abnormal. Is anywhere I can send these scans that specializes in Eagles Syndrome? Thanks again for any advice. It’s been a long road.

The two most experienced surgeons (Dr. Samji - CA & Dr. Cognetti - PA) in the US will do phone/video consults, but I believe they both require CT scans that specifically look at the area of the neck where the styloid processes & stylohyoid ligaments reside, & a radiology report stating the length of the styloid processes & whether or not the ligaments appear to be normal, partially or fully calcified. You can request that the radiologist who reviewed your scans revisit them w/ this in mind & provide you with another report. Even if (s)he feels the styloids are normal length it would be good to know what length this person feels is normal. A styloid process longer than 2.54 inches &/or a calcified or partially calcified stylohyoid ligament are all considered to be Eagle Syndrome. A normal length styloid process that is excessively angled, pointy, thick, or some combination of those can also create symptoms so diagnosing by length alone isn’t the perfect answer.

Good Morning, I had something interesting happen this morning. After receiving news yesterday afternoon that everything was normal. I checked my chart on-line this morning and there was an updated CT scan result posted. It sounds like the radiologist is seeing some of what the attached scan shows. I meet with the doctor tomorrow, maybe there is a chance that I was onto something in my own research. I’ll keep you posted.

Isaiah_40_31 do you think the lab report would be enough for the other doctors you recommended?

That report’s ‘good’ in that they’ve confirmed calcifications in the ligaments, so it could possibly be causing your symptoms, let us know how you get on tomorrow!

So glad you got confirmation of what we could see in your scan - calcified s-h ligament(s). Even though they aren’t fully calcified, what you have would still be classified as Eagle Syndrome. I would send your scans to whichever (or both) doctors in an email & see if they require the CT scan itself. It may be that the radiology report is fine. Dr. Samji’s medical assistant fields his emails - you can reach her at
kimberly @ camino ent . com (spaces are added so the site software doesn’t recognize this as an email address & block it). Dr. Cognetti’s email is in the current US Doctors’ List. I don’t know it off hand. Both doctors charge a substantial fee for a phone consult/video conference. Some med insurances will pay for that. You might want to check w/ yours to see if it will be covered & be sure to ask the cost of a phone consult in your email so you don’t end up w/ “sticker shock” after the fact.

I met with the doctor this morning. He said that my calcification was not as severe as he has seen in some patients but it is there. He said that there is really no way to know for sure if it will help other t han to do the surgery. We scheduled it for the 9th of July.

I guess mine is more of a calcified ligament versus the massive styloid’s that some people have. Just wondering if anyone else has seen relief in this situation. It’s happening pretty quickly, which is a good thing, it’s just a lot to process.

Have a good day

Not everyone has elongated styloid processes- some members have just has the calcified ligaments like you. And bear in mind that sometimes radiologists measure the SP & any calcified ligaments all together, so the SP itself might not have been that long…The only thing I would just note is that your SPs were really quite angled, so even though they’re short, they could maybe cause a problem? Did your doctor mention that?
Good news that it’s not long to wait! There’s lots of info in the Newbies Guide section about what to expect & suggestions for what to get ready, & the past discussions are searchable for info to help you prepare.
Hope it all goes well, & that you get relief from your symptoms!

Good Evening, Jules. The ligaments themselves were noted on the radiology report as calcified 2 centimeters. I don’t think that included the styloids. The doctor that is doing the surgery really never looked that hard at the 3D reconstructed CT scan. That was actually from a while back. He told me that he does about 6 of these a year and has good outcomes in most cases. He does a lot of cancer surgeries in the head and neck area and he says he operates in that area of the body at least once a week. He said he will operate externally because he wants to make sure he can get the entire ligament plus the styloid process. He said he has tried both approaches but feels that the extra oral has the best outcomes. I’m comfortable with him and the approach. Thanks for your support. You guys are very nice people.

I like the sound of your doctor. He has a good surgical philosophy. Dr. Samji has the same one & is also a throat cancer specialist so does many surgeries in that area of the body. Good to hear you’ve found a practiced surgeon to help take care of you!
I’ll put your surgery date on my calendar & pray for you especially that day.

It does sound promising if he’ll remove the styloid as well, & good that he’s experienced in operating in that area, & that you feel comfortable with him! Best wishes…

Jules, one thing I forgot to mention was that I do feel like is that my styloid processes are pointed the wrong way because they should be following the jaw line. Depending on how they are measured they are between 2 and 3 cm long. Just thought the note in the lab report was odd when it said that the styloid processes were very short. I think they would be more in the average range. I was also looking a little more at the anatomy and it seems like there are blood vessels and other nerves for sure in the area of where those bones are pointing. Just seemed odd to me that radiology wouldn’t notice that. Any experience with that?

I can only guess that as there’s so much ignorance with ES, they were only looking at the length & nothing else, unfortunately. There are research papers which mention the angle, but the radiologist probably wouldn’t be aware of that- this might be the only case of ES that they ever see!

It would be good if you could get a CT scan from the side & front as your picture is more from behind, & the position of your head may be what gives the appearance of a backward facing styloid process. That’s not to say it isn’t angled oddly just that it may not be as it appears in the picture you posted.! The image is mine. This is more the CT angle that will be telling. 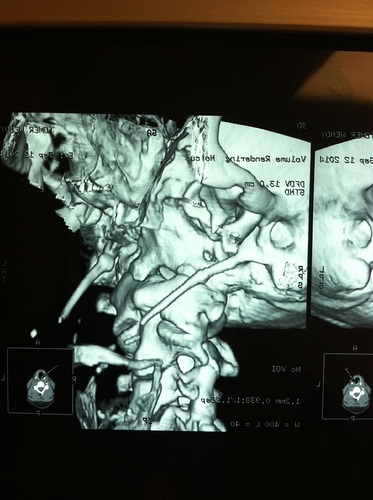 Good morning, that is an interesting picture. Are the styloids pointing forward with your jaw removed from the scan?

The styloids are pointing forward toward my hyoid bone (it’s the bone at the junction of your throat & neck. In the picture above the styloid processes would run into it if they were a bit longer). The stylohyoid ligament runs from the tip of the styloid process to the lesser horn of the hyoid. My lower jaw is above my styloid processes in this picture. The radiologist had me tip my head back so he could scan this area of my neck.
Here is another picture from the front w/ my lower jaw visible: 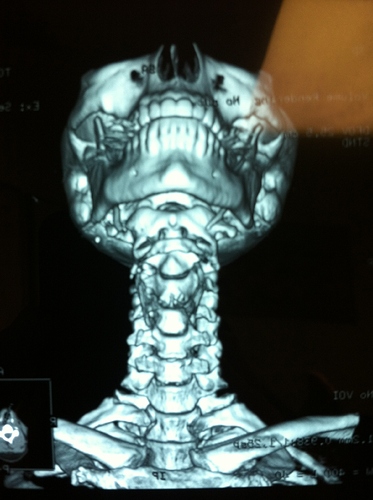 Imagine that! Everything is “normal” Keep pushing to get your diagnosis and healing! What state are you in? OK Physicians has Dr. Greg Krempl who diagnosed me after 18 yrs. of being told I was depressed, post partem depression, etc…Sounds like lots of pain for you. Does it feel like you have something under your tongue? That’s what I felt and sticking in the back of your throat…

Well, well, well…how amazing that the Radiologist found something. It is only a few centimeters but, just enough to be a real problem and evidence of ES. Let us know what develops.