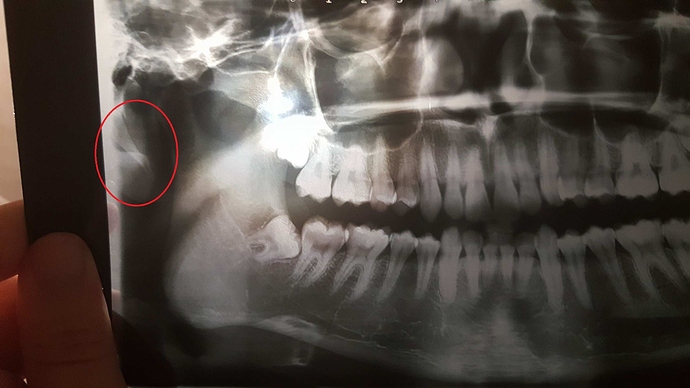 Eagle.jpg2048×1152 274 KB
i have uploaded those two pictures of my panoramic x-ray maybe anyone please can tell if any signs that can tell if i have eagles syndrome i have had brain mri and it showed no remarkable signs of anything all doctors seem to not know well about eagles syndrome here in Egypt so i hope i can find help here
thank you
SolimanM July 25, 2017, 1:49pm #2 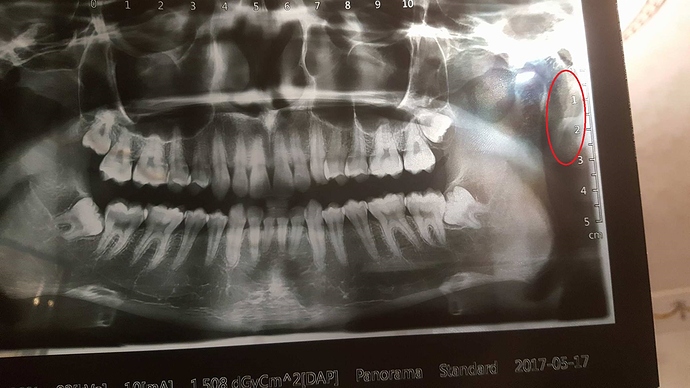 We’re not doctors/ experts on here, just people who’ve had ES ourselves, so you won’t be able to get a medical opinion, I’m afraid. But looking at the scale on the side of the x-ray, you can see that the styloid processes look to be about 3cms, so only a little over the average which a lot of doctors consider to be about 2.5cms. (Unfortunately not all doctors agree on that; some consider 3-4 cms even as ‘average’). In the Newbies Guide there’s info from research articles which states that it’s not just the length of the styloids which can cause symptoms, but also the angle they grow at. (Yours look as if they might be quite angled). Your symptoms sound quite typical- again there’s info about common symptoms in the Newbies Guide, and what could be causing them.
The best advice we can give is that you take copies of research which supports your case, the symptoms you have etc. with you if you try to get a second opinion. The sort of doctors (if there’s none on the list in the doctors info section) who might be able to help are ENTs, Otolaryngologists, skull base surgeon, or neuro/ vascular surgeons who are used to operating on the head/ neck area.
Some of your symptoms sound like they could be caused by nerves being irritated- the pain in your face and stabbing pains in your ears. There are medications which could help that like Gabapentin or Amitriptyline, if you’ve not tried any of those- it can take a go with a couple of medications before you might be able to find one which works- again there’s info in the Newbies Guide about that. If it helps, the best advice I had on here was to try sleeping partly upright, so with a wedge pillow; it really helped ease the pain at night for me. I used a V shaped orthopaedic pillow too as it can take the pressure off the side of your neck.
Hope that some of this helps!

Jules is so right - it’s worth it to get a second opinion. If your ENT doctor is not familiar with ES or the surgery to remove the styloids & stylohyoid ligaments then try getting an appointment w/ another ENT doc, a skull based surgeon or neuro/vascular surgeon as Jules suggested. Also as she said, from the Newbies Guide on this site, print off symptom info & anything else you think supports your diagnosis to take with you when you go to your second opinion appointment. Sadly, surgery & styloid/stylohyoid ligament removal is the only way to help the symptoms go away permanently.
I hope you’re able to find a doctor not too far from you who knows how to help you!

Glossopharyngeal Neuralgia (GN) can be a stabbing pain like you describe, so the medication might help. It can take a little while to build up in your system, so might not help for a bit, and if it doesn’t then there are other medications which may work as I mentioned. The Ben’s Friends facial pain site has good info too- you can look at the site without having to join if you want.
Hope that you do find the pain eases, and then you can take it from there…

@SolimanM My son also had everything you seem to have. He had something called palatal myoclonus, which causes the clicking in the ears. He also had pain that eventually we found out was GPN, glossopharyngeal neuralgia. The pain was in his ears and throat and was debilitating. It took us years to figure out he had ES, Eagle syndrome. He had bilateral styloid removal up to the skull base by an ENT and now he is pain free after almost a decade of suffering. If you want to read more about my son, I created a website with tons of information. www.sherrijonas.com I also documented his story in a book called Connecting the Dots: Palatal Myoclonus, Glossopharyngeal Neuralgia, Eagle Syndrome, Lyme Disease, and Babesia. In the bibliography I included hyperlinks to a lot of research. Here is a link: https://store.bookbaby.com/book/Connecting-the-Dots2 I hope that helps. Lyrica helped a little, but he still needed surgery. The surgery took everything away, including the ear clicking. He is not on any medication any more. He no longer needs it. His is a success story. Never give up trying new things until you find what works for you. (and a CT of the neck may be a better picture of the styloid processes, but your doctors will know what to do)

Yeah i have read a lot about your son story i hope he is well now i hope i too will find relief someday my ENT said today that to cut the pain completely i need to cut the nerve !!! he never even said what caused this neuralgia i don’t want to be on any medicine because it makes me mentally weak and i do lot of computation as i am a computer programmer i think my dream is over i seem to be completely lost here in a country that is worthless in every aspect of life

@SolimanM I hope you can find an advocate- someone who can speak to doctors on your behalf. My son had trouble communicating because of his pain. I did ask about cutting the nerve, but no one here would consider it because the GPN is involved in so much. Also, I was told that nerves can regenerate. Please don’t give up on this or on your dreams. Keep trying new things…eventually, you will find something/ someone to help you. These wonderful people on this site and others will be here to support you. Ask about nerve blocks- consider MVD. See a neurosurgeon. But never give up hope or looking for solutions. There are many medication options, Tegretol is only one.

Cutting the nerve would definitely NOT help!! Good job you’ve researched this yourself, and not taken his word for it! The different medications can be helpful, so please keep trying with those, not all of them always cause side effects. I know that sometimes members have had success finding a doctor through the authors of some of the research papers published about ES; there might be one published by a doctor nearer you. What is the health care system like in Egypt- is it publicly funded like the UK or funded through insurance like the US? Would you be able to travel to another country at all?

i don’t know how to describe it but the health care that the government provides is no use all doctors depends on private clinics because they care about money more than people needs i don’t go to the health insurance i go to those clinics because they have more care for patients but pay more as it’s not covered by any insurance also doctors here treat patients like they are all ignorant like you can’t discuss you illness with them scientifically … i can’t travel anywhere right now it’s impossible our currency has become nothing compared to the UK GBP or US $ it’s so expensive i would travel if i could since no body here has the knowledge of what i have also i have been here to the best doctors in my city .

SolimanMakh - Sometimes the best doctors aren’t really the “best” doctors because they have formed solid opinions about what symptoms for particular ailments should “look like”. You need to find a doctor who thinks “outside of the box” and will try to look at all of your symptoms & help to identify if you have one or several things going on in your body. Don’t let any doctor make you feel like your pain is psychologically induced. It is very wrong in my opinion for a doctor to say that when (s)he has done very little research into potential causes for your pain. It sounds like the doctors you’ve seen don’t want to do the work to figure out the puzzle of your health troubles so they are dismissing them as “psychological”. As both Jules & Ear_Mom have said - DON’T GIVE UP!! Find a friend or family member who will do some research on your behalf, & who will go to appointments w/ you & speak up for you if you are too ill to do it yourself. Take copies of research papers with you to doctor appointments for all the things people on this forum have suggested you might have. There is a forum for each suggestion on the Ben’s Friends site, & there will be links to research papers for each illness. The more evidence you have that shows your symptoms are real & associated w/ defined diseases or syndromes, the more believable your pain will be to the doctors. You have to outsmart them.

Keep programming on the days you feel good. Don’t let what you love to do slip away. It will help take your mind off your pain & frustration.

I will be praying that you are able to find the help you need as soon as possible.

Psychological trauma wouldn’t cause neuralgia- that’s a standard doctor’s dismissal when they can’t diagnose what’s really wrong with you- IMO!
Eagles Syndrome is a known possible cause for both GPN and TN if you look those up online, so it’s definitely worth keep trying to get a diagnosis. If I get a chance I’ll have a look at some of the authors of the research papers to see if there’s any nearer you. And I second all that Isaiah says as above!

SolimanMakh - One addition to my comments from yesterday - if you can get a diagnosis of some sort then focus on taking care of that particular thing. For example, if you do get an ES diagnosis, find a surgeon who’s willing to do surgery to remove your styloids & stylohyoid ligaments. Sometimes taking care of the thing you know you have will reduce or remove the symptoms of the other possible things you think you might have. Don’t be overwhelmed by the “big picture”.
One step at a time…

My daughter (34) was diagnosed two weeks ago and had an appointment set for Aug 15th, but she received a call today on a cancelation to meet with the ENT surgeon. I will keep this updated as we move along. I have noticed that there aren’t very many Doctors listed on this site for Canada and I am hoping to change that. I have been spreading the word and getting feedback about other physicians in the London, Ontario area that may be doing the surgery and will update the Doctor list as I get confirmation.

Thank you, Eagle_Mom! How exciting that your daughter was able to get in sooner to see the surgeon. I hope her appointment went well today.

Any experienced doctor referrals are appreciated. The more varied the locations of this site’s Doctors’ List the more people who can be served closer to home.

Let us know how she gets on, and yes, there is a real shortage of doctors in Canada!