Hi Everyone, first post here! My name is Karina, I am from Canada and newly diagnosed (?) with Eagles syndrome. At least my doctor thinks that’s what it could be after I did my CT. I have many symptoms and have been dealing with this challenging thing for 1.5 years now.

My radiologist said that my CT shows that both styloids are elongated (longer than 3.5cm). He never mentioned the ligament though. From what I see in these CT images converted to 3D - do I seem to have a calcified ligament? I can see 2 pieces of the styloid complex with a bit of a break between them. Does anyone else see this? Is this a calcified ligament? I think it’s also seen in my XRAy as well. 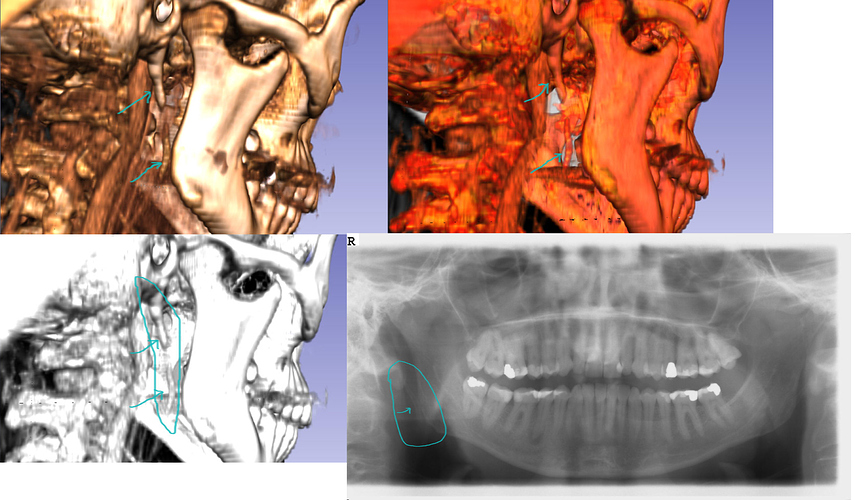 I see the bit you mean, it could well be some calcification of the ligament. It is quite common to see extra bits of calcification on them, my ligaments were fine but others have had this too. We’re not doctors though, so you’d need to speak to your doctor about that.
We do have a list of doctors familiar with ES in the Doctors Info Section, although for some reason doctors in Canada with experience are hard to find. Is the doctor who diagnosed you experienced with ES, have they done any treatment?

Hi! Not a doctor here but it looks like the lower piece could be a calcified part of the stylomandibular ligament. The stylohyoid ligament would attach further down to the hyoid bone…just a thought

My CT scan (just done 12/30) shows “partially segmented ossification” measuring 5mm followed by another ossified portion measuring 2.3 cm. Total length of the segments 3.2cm. My other side is 1.8cm. A previous Cone Beam Tomography shows both sides segmented like yours. They only list on CT Report this below “Styloid Processes”, no mentioned of ossification of the s-h ligament. I am assuming some of these segments are the s-h ligament. I meet with the dr in a couple weeks and will get more of an explanation for this. What is strange and Im curious if others who have bi-lateral ES has same symptoms switch side, Dr. Samji indicates I need surgery on the right (3.2cm). This is the side that had the first major pain flare. Now most of my extreme pain is now on the left. I will speak to Dr. Samji more about the left side being the most symptomatic. Any other have this?

@Snapple2020 - ES is a funny critter & can cause crossover pain. I would concur that the segments are portions of calcified s-h ligament (what its called depends on who interprets the scans). Since you have bilateral segmental calcification, it would follow that you will have symptoms on both sides since ES can consist of only calcified stylohyoid ligament(s) w/o elongation of the styloids. Sounds like you have both problems on the right side & only ligament ossification on the left.

I was reading about the crossover pain after one side has surgery that people mention in their posts. The body does things to compensate for pain. Seems in my case, your brain goes to the worst pain in the body and then when that pain removed, your brain goes to the next worst pain. Interesting. As I look at the Cone Bean Tomography screen shots from 2016, it shows both sides have segmented ossifications with only measurements of the segments, not the styloids. The new CT scan report states partially segmented on right, and no mention of segments on left just a “ossified measurement of 1.8cm.” " Right - Small ossified portion cephalad to the skull base 5mm, and inferior to this an ossified portion 2.3cm for total of 3.2. Both sides mention “mild anterior angulation”. I noticed is some peoples posts reference the angle or degree of angulation. This report doesnt list that specifically. Can you translate? I noticed someone posted a conversion of CT scan to 3-D. The CT report is not very detailed. A visual 3-D would help. I would assume that as the years go by, that the ossifications on the ligaments lengthen or grow and may connect? I look forward to going over the new scan with Dr. Samji and comparing to 2016 tomo. Since my pain is so severe on left, Im concerned after he operates on the right, the body or neck may shift the pain and cause it to worsen. Its possible it may get better when the body stops protecting the right. After years of body work and chiropractic, Ive learned often the pain on one side can be referred from the offending side. Thanks for the help.

If you search the site for ‘converting a CT to 3D’, there’s info & links to a site for doing that if you’re interested.
Calcification of the ligaments can be solid, & other times in segments e.g. like rice grains. It can get confusing with measurements sometimes as some radiographers measure the styloids & calcification separately, some measure it as one long styloid. It can worsen over time, yes, but not always.
Sorry if I missed it in a previous post, but why does Dr Samji want to do the right if your pain is more on the left? Is it because of the measurements? It will be interesting to go through the scans with him.

Hi Jules. I saw the link and saved it to convert to 3-D and now waiting on the disk. I noticed how two different reports/radiologists measured segments and styloids differently that’s how I got confused. I’m a bit of a detail nut and a visual person so Ill be interested in comparing the scans that are about 5 years apart to see if it has worsened or if the segments work towards connecting. I believe Dr. Samji wants to do right side because of the measurements. That’s why I decided to fly in and meet him in person to go over the scans vs phone consult and talk to him about the worse pain on the left before scheduling surgery. I want to have a clear understanding about what is happening.

I had bilateral ES w/ my symptoms dominating on the left side. When Dr. Samji went over my CT scan with me, he pointed to the right side & said, “I’m removing this one first.” I questioned his decision because at the time of my consult the right side was relatively symptom-free compared to the left. He said it was because of the styloid angle. The right was growing more straight down & was thicker than the left. Prior to the time I had surgery, I did start having some scary symptoms on the right especially when I exercised hard. At that point, I began to understand his reasoning for removing the right side first. I will say that even up to the morning of my first styloidectomy, I still implored him to remove the left first because of the pain it was causing. He didn’t take pity on me & in the end, his decision was the best. At that time, he required 6 months between surgeries. I counted the days then minutes till my next surgery but ended up having a cycling accident w/ a head injury a week prior to my surgery date so surgery had to be postponed 3 more months. I cried when he told me that.

The angle of the styloids can determine what they’re irritating or compressing so angle can be an important factor in deciding priority when it comes to styloid removal.

When my CT scan was done, four wonderful 3D images were included. The ENT who diagnosed me let me take pics w/ my phone so I have copies of them. I never asked for a copy of my CT images but have wondered if the radiology lab that did the CT still has my scan in their archives. It’s something I may pursue eventually but is “water under the bridge” at this point.

I’ve been through the years of body work & chiropractic, too, & am continuing with it. I’ve been rough on my body & at my age, those old wounds are back biting me.

So funny. I too have been hard on my body to a degree and those old wounds are especially coming back to bite me as well. Last year my son and I painted our small one story house. I did alot of the detail work in the eaves and trim and boy did working at an angle (neck) put me into pain for months and months. I feel so old and only 63 and body falling apart. I know I overdo it for what I have going on but so used to just pushing thru the pain and too cheap to hire someone to do the work.
Thanks so much for your story. I would have cried too having to wait! Im going to be careful between surgeries. Given I am in a constant state of some level of pain on left, I imagine I will be the same as you imploring to take the most pain away first. The scans do show more ossification on right and longer. The radiologist also pointed out the right in report. I cant wait to review the scans with Dr. Samji and nice to know where to focus my questions re: angle and thickness of styloids. I’m still wondering if some of the pain on left (radiating to ear) is TMJ/TGN related however when I had a nerve block / botox done that was in the area of the styloid, it was the first time I was pain free in a while. Unfortunately it only lasted 7 weeks and came back with a vengence even worse than before.

You should be able to sign a release of records where your CT was done and get a disk. They are required to hold on to them by law for 10 years.

Thank you for the scoop on the CT scan records. Very helpful! I’m 63, too, so besides ES, we have that & stubbornness/working through pain in common.