Hi everybody!
Woke up after Surgery 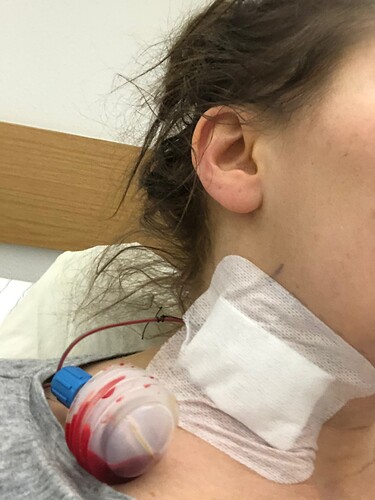 image1920×2556 217 KB
an hour or so. Getting Dexamethasone per perfusion, to reduce swelling but also for prevention of Addisons in my case. Felt a little dizzy when I stood up, and speaking feels a little blurred, but : I’M ALIVE!!
I was already told, that my Stylohyoid Ligamnt was completely ossified and probably pulling the right hyoid towards the back.
Concerning my IJV, they didn’t remove it all back to the base of my skull, what Dr. Heim told me he would, but have to wait for more Information.
Hey, I had my first 2 Joghurts!
I’m so glad, I decided to do it.
4 Likes
KoolDude January 19, 2022, 6:39pm #2

@Eaglefatigue So Glad you made it through and wishing you a rapid recovery. Better to have it out and than in there. Rest! and take it easy for now.

So good that you’re safely "on the other side, Eaglefatigue! This week will be tough but starting next week you may notice some good little positive changes.

Please let us know what you find out about how much styloid was left behind. Sometimes the styloid doesn’t need to be removed to the skull base to help resolve symptoms. It sounds like that might be true for you based on how extensive your calcification was.

I’ll be praying for your recovery to go smoothly & w/o complications.

So pleased that you’re through surgery! I hope that you can get some sleep, I had a drip the same as yours & it kept me awake all night! Hopefully you’ll have it removed soon & will be back home. Take care & hope that you see improvements in your symptoms soon

Just talked to Dr. Heim. So I’ll write it all down right now, before I’ll forget again due to anesthesia- overhang or so

He told me, that my Ligament was completely ossified and in the upper part compressing my IJV. By monitoring my Cranial Nerves he said, that they seemed to be over reactive, most probably due to constant triggering by the tightness though the ligament.
He’d be glad, if mybradycardia would also stop, because he absolutely believes it vagus irritation.
He also talked with me about “why ossification sometimes happens”.
So by looking at hundreds of ossified ligaments, they found out, that it is basically activated embryogenic cartilage tissue, that becomes activated by bagatelle-trauma. That’s also what I think. Doesn’t have to be tonsillitis or parotitis or so.

Thanks to all of you for encouraging me and all the warm and kind words!

@Eaglefatigue I know the Dr. said cranial nerves and only mentions Vagus nerve regarding the Bradycardia but I wonder how many other cranial nerves have been affected by this calcified ligament. Now, it is clear it was not only compressing your IJV but wreaking havoc on your cranial nerve systems. Hoping to see some improvement on symptoms. Now you need to rest to recover.

Update
The day after: I‘m doing great, except for tongue issues. It tingles and my speech is a little dysarthric/ slurred on the OP-Side.
Does this sound familiar to anyone? It‘s strange, because no nerves seemed to be damaged yesterday…
I think the Dexamethasone prevents some major swelling. Regularly getting Coolpacks.
The only pain meds I need is Novalgin twice a day. I don’t know how it is called in English…
Still little bit dizzy, but much better than yesterday!

Issues with your tongue function is quite common post surgery, it does usually resolve quickly. The hypoglossal nerve can get a little stretched during surgery. @Isaiah_40_31 had issues post surgery & had exercises to do, so I’m sure she can reassure you & give you some suggestions if it’s still there after you’ve healed. Take it easy & hope that your dizziness keeps improving

I’m glad you are doing so well. I think nerves could be irritated during surgery, that makes your tongue feel a bit numb. That should dissappear within the next days or weeks. @Isaiah_40_31 had or sometimes still has litte problems with her tounge too, she told me. I’m sure she will tell you a bit more about that soon. For me eating ice popsicles (frozen water with taste) was a must…

Furtheron best wishes for a speedy and full recovery.

I did have post op tongue trouble as noted! My surgeon told me when I came out of surgery that the op side of my tongue would be paralyzed for awhile. I could feel it, but the motor part of it just didn’t work which made speaking (I sounded like I was drunk when I talked) & eating were a bit challenging (I never realized how important the tongue is for moving food around in the mouth while chewing!). My glossopharyngeal nerve was wrapped around my styloid & had to be unwrapped so the styloid could be shortened thus it became irritated & affected my tongue function. Because my nerve irritation was more severe than normal, it took 6-9 mos. for my tongue function to recover. I do still have a little trouble speaking clearly when I’m bending forward (very odd!) & occasionally at at other times but for the most part, my tongue is in good working order.

As both Jules & TheDude said, most people w/ post op tongue dysfunction recovery fairly quickly from a few days to at most a couple of months. I expect yours will recover well & soon. If not, I can send info about exercises you can do to help with recovery.

I’m so glad you got the surgery you needed. Wishing you have a smooth recovery!
I just had my left styloid removed two and a half weeks ago and I had tingling on the left side of my tongue. It lasted about a week before it started to fade and now I can barely feel it. I think it’s just nerve irritation from the surgery itself. I did not have any of the nerve unwrapped like @Isaiah_40_31 so I’m sure that helped.

I also think your Dr is right about the vagus irritation for the bradycardia. I had tachycardia and bradycardia spells before surgery that would last hours at a time. I got out of surgery with mild tachycardia and it slowly went away after the first week of healing. I could watch my heart rate go down on my finger oximeter when I was icing those days.

I also didn’t have the styloid removed all the way back to the skull because I had a lot of nerves wrapped around the base of my styloid so I still have a little under 2cm left. I can say most if not all of my issues with carotid artery and internal jugular vein compression have gone away. My left styloid was my worst one. It was angled in a bad way. I feel like the swelling at the first week masked some of the compression improvement. I’m still healing though so some things may get change.

Thanks for the info & update, so pleased that surgery helped you!

Hi @Eaglefatigue, it’s been some months now… how are you doing? Do you have a clear idea of which symptoms the surgery has helped? I’m particularly interested to know if it has improved your fatigue?

I have jugular compression between C1 and styloid, and fatigue is a main symptom for me.