For people trying to get Diagnoised with Eagles

It took me 10 years to get diagnoised and it was the 3rd Oral surgeon During that time who finally spotted it. Some of you guys might have even seen my youtube video were I point out the styloid on the Panoramic x ray anyways long miserable story cut short Im willing to look at a copy of your dental panoramic xray I will put my xray over it to pin point where it might be mine was on the right so if yours is on the left ill flip my xray upside down circle what appears to be a styloid and mail it back to you our send a text pic or video over the phone pointing it out to you even with my styloid diagnoisis on the panoramic I was still told by a Ent I didn't have eagles through a medical x ray ,and a ct (he didn't know to order a 3d ct) It wasted another 3 months .

Thank you for putting yourself out there like this! We need more people like you that are willing to help!! Little by little awareness is raised and people are getting the help they need :)

Thank you and sharing your story on YouTube. I watched all of them and could relate so much. It made me pursue ES surgery. Thank you again. :).

It's such a blessing that we all can impact each other's lives in significant ways :) 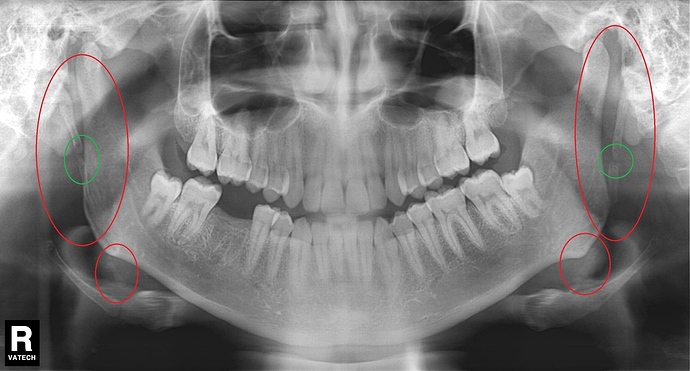 Thanks for posting! What a great, vivid example!

I do know that some doc that are ENT will not do a styloidectomy until a TMJ specialist has seen or treated you. I was treated and had a panoramic done for two years. No help for my stabbing throat pain and ear pain.

Yes I can see it but some TMJ specialist don't as mine did not nor many ENT docs with my multiple other CT and MRI's. I did get lots of laryngitis when the bone went in my throat and still do. Since I had the styloidectomy the stabbing like a knife in my throat is gone.
Deleone said:

400-eaglepanoramic.jpg2048×1104 147 KB
My buddy Teglas let me post his panoramic with both sides having Eagles with them circled

I found this group because of your youtube video. Thanks Deleone.