I’ve heard x-rays aren’t the best for showing, but I just found one for my wisdom teeth removal. 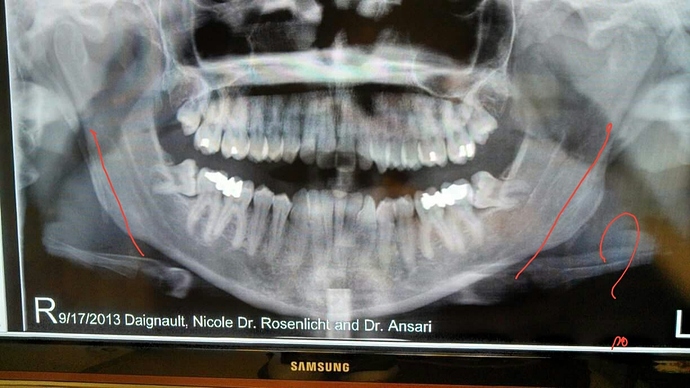 The panoramic x-rays are good to show styloids sometimes- that’s how mine were spotted, although you could only see one side well. CT’s are definitely the best, if you can get them, but panoramic x-rays are a good route to try if people are struggling to get a diagnosis.

Yes- mine was found that way, also. 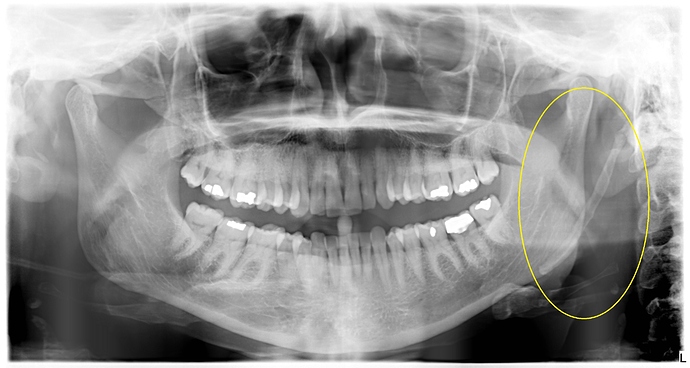 I have a similar panoramic from the same office (Ansari)! Done the same year!

I wanted to compare my most recent CT scan, for which the report shows “elongation of the right greater than left styloid processes which can be correlated for clinical signs of Eagle syndrome.” I had actually suggested to my ENT that I had this, and he said that it’s no biggie and besides, surgery rarely works. I figured it out because I can feel it under my tonsils and it gives me a sore throat. The CT scan was for facial pain; it also showed sphenoid sinusitis, so who knows at this point.

Are you getting any treatment for the sinusitis? If that gets dealt with then maybe you can see what pain is left, and make a plan to see if you can get treatment for the ES. A lot of doctors try to fob people off because they don’t want to do the surgery, or don’t know enough about it. There are risks, and it doesn’t always work but it can make a massive difference for a lot of people. There’s a list of doctors who are familiar with ES in the Doctors Info section if you want to think about a second opinion.

I had an ENT tell me I was “fine” even though I had a long list of symptoms and the CT Radiology report showed signs of my Jugular and Carotid being compressed! If you feel like there is a bone in your throat and the it is causing you pain…I suggest you push for what your body and mind are telling you. The doctors don’t know what you are feeling and this is a very rare syndrome so many don’t have a lot of schooling & experience in this area. [You may find it helpful to read my super long post history for my experience and results under the heading “Story Thank you & CT Pics”] Ultimately I am so glad that I was my own strong advocate and now I am bone -free. Most of my long list of symptoms are completely gone already [and I had my second surgery 4 days ago].

Yes, that’s what I am doing now. I am sure the styloid has bothered me for many years, but it is basically limited to a sore throat (poking). I am now having other problems and not in a happy place. I have been fobbed off multiple times, and just took it as an allergy thing. Not so sure anymore.

There’ve been a few members with sinus issues as well, but not sure if that’s been helped after surgery. Hope that yours clears up soon.

I am worried I will need two surgeries. I turned in bed the other morning and could feel the poke/pressure very hard into throat. And the body aches from sinus are back after antibiotic - the sphenoid sinus was acutely infected even though I did not have a cold. The worst thing about this is that I was referred to an ENT and they refused to give me an appointment until I mailed the CT scan (he already had the report and the doctor’s notes). The received it well over a week ago, and still nothing. I can’t believe this! It’s not like I am getting free or discount medical - but he is a university physician and probably doesn’t care about fees. This is not a good sign. My old ENT got dropped from my insurance.

Sorry to hear that Jenny- it can all take a while, but don’t give up, keep fighting. So many members have struggled to get taken seriously but do get there in the end. Thinking of you…

It took 7 months of different Dr’s to finally get a diagnosis. Was operated last August by Dr Cognetti. I have my life back. Be your own advocate

Jenny keep fighting for what you need. I agree with theeaglehaslanded - Advocate for yourself and don’t let them slow you down