Here is an interesting case report about medical marijuana (dronabinol) and IIH:

International Association for Cannabis as Medicine

Science: Cannabis and THC effective in the treatment of idiopathic intracranial hypertension

Scientists of the New York State Psychiatric Institute in New York City presented a case report on a woman diagnosed with a longstanding history of idiopathic intracranial hypertension reported improvement of headaches, photosensitivity, transient blindness, enlarged blind spots, and tinnitus after smoking cannabis. All these symptoms and signs, including papilledema (swelling of the optic nerves where they enter the eyes), were associated with increased intracranial pressure. This means that the use of cannabis effectively decreased intracranial pressure. Treatment with THC at a dose of 10 mg twice a day, then reduced to 5 mg twice a day, was also effective.

Idiopathic intracranial hypertension is a neurological disorder characterized by high pressure in the fluid around the brain. It is also known as pseudotumor cerebri because there are some of the signs and symptoms of a brain tumour without a brain tumour being present. The space around the brain is filled with a water-like fluid, the cerebral-spinal fluid (CSF). If there is too much of CSF present the pressure on the brain rises. The cause of the disease is unknown. It is mainly found in overweight women of childbearing age and only rarely in thin men. 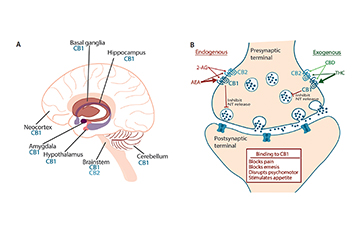 Shown effective for treatment of pain, Cannabis may have benefits for patients with headache, but more research is still needed.

Thank you for the ongoing information, TheDude. It helps inform people & gives options that are outside of the typical medical treatment box. I recall you’ve mentioned that you’ve found success in treatment of your ES symptoms using cannabis. Have you found a doctor who is willing to do ES surgery for you or are you trying to avoid surgery for the moment. I’m sorry but I’ve forgotten.

Hi and thank you Isaiah,

Yes you are right, cannabis helps and has made it possible for me to last so long. After years, I take slightly higher doses than the described beginner doses. I also note that the effects of cannabis can be very different. For me, many sativa strains even aggravate symptoms, while indica strains in particular help quite well. But I have also found a sativa that reduces symptoms and also has a positive effect on depressive moods. If others want to use cannabis for ES therapy, I would recommend trying the following varieties, which also have a positive effect on me:

(A nice page for information about strains is https://www.leafly.com/strains for example.)

In addition, I take CBD capsules twice a day with 80-120 mg per single dose, especially for better tolerability of the THC and against (glossopharyngeal-) neuralgia.

Since the IJVS diagnosis, I am now also set on blood thinners in a preventive dose (Xarelto = rivaroxaban). I am therfore leaving out the Wobenzym, which also had a positive effect. (In my opinion, taking aspirin to thin the blood, which has also been discussed here, does not do anything with IJVS, since it should only work on the arterial side.) The blood thinning also improves my symptoms.

Due to the fact that my symptoms meanwhile prevent longer work, I am currently in preliminary talks for a third operation. At the same time, I try to have the diagnosis of IJVS with IH confirmed, but mostly continue to be stigmatized … So far, the only sensible contact point for ES in Germany seems to be Uniklinik Bonn MKG. Others have apparently not yet penetrated the whole problem that far, especially when it comes to IJVS.
In the next few days I will try another neurologist…

Thank you for all the great information. It sounds like you’ve done your homework! I’m sorry your previous surgeries haven’t helped a whole lot. Getting the styloid removed back to your skull base would surely take care of the IJV compression. We’ve had several members who’ve had IJV compression but the styloid hasn’t been shortened far enough or it hasn’t been completely removed & regrows a bit so the problem persists after surgery. This, of course, requires yet another surgery.

You’ve probably read that our member blossom has IJV compression and had an 80% improvement from her symptoms after starting on a prescription blood thinner. This is good information to remember. Also what you said about aspirin is interesting. Would you please explain why you think it should only work on the arterial side. I’m a little unclear why it wouldn’t work as well for IJVS.

I hope you’re able to get to the Uniklinik Bonn for help. We’ve had several members from Germany have ES surgery there with good outcomes, I think. None have come back after the long term to let us know.

Would you please explain why you think it should only work on the arterial side. I’m a little unclear why it wouldn’t work as well for IJVS.

Thanks for the info!