Sooo... take a look at this

I had my post surgical CT last week. The ENT's nurse called and said its not impinging your carotid, thats all he had to say. Anyone got any thoughts on this, looks like a mess to me? 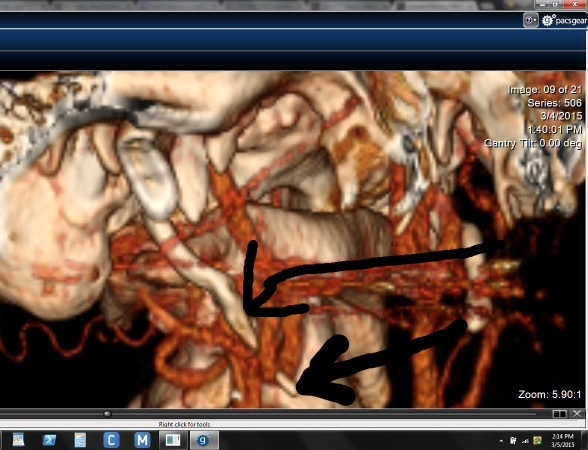 Wow! It's certainly wrapped round something! I'd want to see him again about it. Sorry, can't remember your situation- have you got a follow-up appt., or was the phone call it? There's so many arteries and veins in that area, the carotid's not the only important one, but I'm no anatomy expert. Have you tried looking at anatomy images online to work it out? I did some research yesterday and found several papers online about jugular compression by styloids causing intracranial hypertension- which would cause headaches, off-balance feelings, blurred vision, pulsatile tinnitus amongst other stuff. What symptoms do you get?

crmfghtr, seeking out additional opinions should help clarify what should happen next. . Feel free to check Emma's past discussions about recommended doctors.

Are you not seeing the ENT again for a better idea of what the indications are. I would have thought that was your right. Members can give their opinions but are not doctors and we can’t be sure of the implications of what we are seeing.
Wishing you the best of luck.

Agree with Nel. It is very hard to "interpretate" this image and what we see could just be "normal".

What kind of CT did they took? It was a head with contrast? I would like to get the same.

Oh Ill have to look for that Jules, thanks. I have seen 3 ENT's all say the same thing, can't cause headaches, tinnitus etc. I had surgery by one who said he would get most all of it out in June, does that look like he got almost all of it out? Shees. So anyway now Im seeing a Dr. Garvis who will do surgery but wants to do the other side first I guess he is concerned about scar tissue but it doesn't have that mess wrapped around it. His office just called and is asking my hospital for the radiology report which I never saw, so will let you know.

But that is definitely a big artery of some sort, it couldn't be anything else, I can't see how leaving it like that can be safe in any way. I too am assuming its jugular

I'd definitely want to see the ENT who ordered it for a follow-up, and then if you get no joy get a second opinion!

I see Dr. Garvis tomorrow morning at the Plymouth office and then see Dr. Gendron the following Tues. That will make four different Docs.

Oh Ill have to look for that Jules, thanks. I have seen 3 ENT's all say the same thing, can't cause headaches, tinnitus etc. I had surgery by one who said he would get most all of it out in June, does that look like he got almost all of it out? Shees. So anyway now Im seeing a Dr. Garvis who will do surgery but wants to do the other side first I guess he is concerned about scar tissue but it doesn't have that mess wrapped around it. His office just called and is asking my hospital for the radiology report which I never saw, so will let you know.

I've already seen Garvis he is not a believer in it doing anything but pain. However he does surgery and hopefully more thorough then Ondrey did, might be my only option will see what he says after seeing scan. Dr Gendron is one I haven't seen yet, please let me know what and if he does. FYI Garvis and Ondrey both only do via oral

I'm not very good at IT stuff, so forgive me if this hasn't worked; I've tried to attach some images showing the blood vessels in the neck in comparison to your CT image....

Ok, so may not be your carotid artery, but what is it? It's behind your ear. Posterior auricular artery?

I think a second opinion or some deeper explanation from this office is in order. I'm not doctor, but that certainly *appears* that it is going through an artery.

Thanks friends, those help. It will be easier viewing on full 3d scan I hve and compare to these. Whichever it is any artery in head being squished up like that cant be good. Also I should hear from the surgeon that has the cd this week. I will keep you poated thanks again for these

Again, I'm no doctor, but if it's compressing an artery, as arteries take oxygenated blood into the brain, you'd get the symptoms of dizziness, perhaps blackouts, maybe 'mini-strokes' etc. Veins, like the jugular vein, take the blood away from the brain back to the body. If blood can get into the brain, but compression of the veins makes it harder to get out, it can lead to intracranial hypertension- increased pressure- with again headaches, also vision problems, pulsatile tinnitus, pulsing feeling in head, pressure in ears/ head etc. Also if one blood vessel is blocked, sometimes the blood can find a new route through smaller vessels, enlarging them, which could also explain why vessels which wouldn't normally look so obvious on a scan picture appear larger.

Hope you get on okay with your surgeon this week!

Ok so they sent me the radiologist report NO MENTION of what is wrapped around styloid process. Only mentions carotid. Here it is

No evidence for dissection. Patent anterior and posterior circulations. No adenopathy or acute inflammation. Upper mediastinum is unremarkable. Upper lungs are clear.

IMPRESSION: Postoperative change in the region of the left styloid process. Both continue to be long. Calcification in the right stylohyoid ligament. No acute inflammatory process.

That's not very helpful then! Have you got an appt. with Dr Garvis to discuss surgery? You said he might operate on one side? I guess all you can do is ask him in person. Keep us posted.

When I went to the Cleveland Clinic, the surgeon sat down with me and went over my CT scan with me, slide by slide showing me why I didn't need surgery. But all I knew was that I felt like I was dying. I was weak, full of horrible pain, and couldn't function. Luckily I convinced him to do the surgery and after the surgery I was IMMEDIATELY better. It felt almost miraculous to me. After the surgery, the doctor told me my styloid had been compressing the carotid artery and jugular vein and was also longer that it looked on the CT scan. I think the bottom line with Eagles is that if you're symptomatic, you should get the styloid removed.

I totally agree, and this one was literally sticking into my throat, visible to naked eye. One ENT said has to be over 4cm so how could only be 3 when it was that big? And yes I know its the cause, there is no doubt in my mind

Dr. Garvis had mentioned anything over 2.5 was long.

They took 2.8 cm out of mine intraorally, I don't know how much is left. Still have some issues but could be due to the neck . Bad Cervical disk, my next challenge. Best wishes to all of you

I am no longer doing the Doctor Spreadsheet. Christian22 ( girlfriend) and Heidemt are doing it. They just posted it recently in both xcell and pdf format and cleaned it up. So keep looking.