Any of you Eaglers have Spinal Problems? I have all the symptoms of Eagles however i wasn't able to see it in my first MRI. However, we did find I had a bone spur that was stabbing into my spinal cord in my mid neck area. this MIGHT be the cause of all my probs. ill let yall know when i go to the DR. next week. 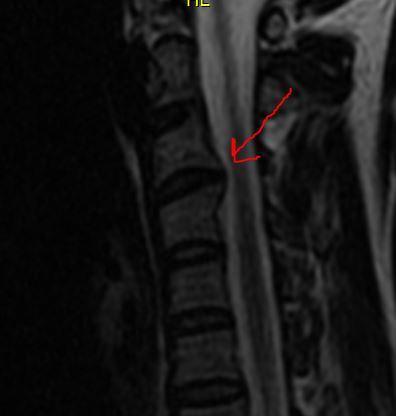 mt, i had the same thing and had to get a disc replaced in my neck. But, that wasnt the cause of my eagles symptoms. i had to get separate surgeries for eagles.

by the way, eagles doesnt show up on mri. you need a 3d ct scan or a ct scan with contrast.

I have herniated discs poking into my spinal cord, but that was separate from the eagle syndrome. Like heidemt said, you'll need a CT to check for eagles.

I have those, too, more pronounced and several of them. Diagnostic tests that we did confirmed I have a flow restriction across my jugular at the styloid, though. I'm sure my neck is causing some stuff, but so is the ES.

I had c5-c6 fusion 8 months ago. My disc was pushing a lot more than your image. My disc was being crushed in such a way that it could not retract back in after it herniated so it rubbing my spinal cord and the protective layers on the cord and trashed the ligaments on spine. That did nothing for my ES symptoms. Made my pain worse due to inflammation. But I obviously needed the fusion. Had my right styloid removed 5 months ago. A few of my es symptoms got better but my pain increased. I have TOS as well so that is causing compression too. I may also have permanent neuralgia due to the ES and TOS or who really knows why. I think I have a pic of my mri on my page. Styloids do not show up on MRI. My neurosurgeon told me that doing the fusion in no way would help relief my ES pain or symptoms. He was correct.

Yes! But I have Ehlers Danlos Syndrome, which predisposes me to spinal problems due to loose ligaments.

I have had a C3-6 fusion as well as a skull- C2 fusion. Eagles was present before, but not diagnosed until after the surgeries.

I should also say that these theories came from a chiropractor and a Holistic Naturopath, both of whom are considered "the enemy" by mainstream family doctors. My ENT declined to comment as it was "not his area of expertise".

No smoking gun, but if the body can produce antibodies to attack viruses and bacteria, then it seems plausible that it might produce new bone growth or calcification to "compensate" for what was lost.

OMG! It would be easier to respond who doesn't. What you describe is something that has to be treated separate from eagles. However, if we go to numbers, it is amazing to see how many of us have had some type of spinal surgery or prior problems. Many others have gone through throat surgeries as well. Of course the doctors will tell you that there is no correlation at all. However, we patients are here documenting the obvious, until someone finally decides to open the eyes and see the light.

so Are you saying there is a connection?

It has not been established, but it seems so. All my cervicals are fused and when I came to the group I was amazed at the number of cases similar to mine. They develop eagles years after neck, head or throat surgery. I had my left side removed the day before yesterday. I am feeling much better and very hopeful. I live in Maryland, but the surgery was done in PA. This is something not everyone agrees to treat!

Having nearly all cervical vertebrae fused myself, including my skull, may I ask how positioning went for this surgery? Are you fused C1-7?

I find this interesting!!!! OMG! This I find interesting!! I was in an accident young but not to long did all this come about... Then found that I have bulging discs.... Then was hit by a truck as pedestrian... And tons of spinal issues including nerve damage, rib issues etc...

One thing I wonder... If you look into this.. a lot end up with Eagles after tonsillectomy... I was I guess a rare case... but my tonsils were developing calcium deposits.... That only happened this past surgery I had on my stomach because of the way the moved my neck...

I don’t have spine problems that I know of but what I do have is an area of my spine on the left side near the shoulder blade that at times becomes painful and swollen. I think this may be because I always hold my left shoulder lower than my right which I believe is because the symptoms on the left are more painful and I am unconsciously trying to expand that area.

I had the same exact paint and it was so hard to reach. I went to the chiropractor and he popped my back around and it did help alot. There still was a very small amount of paint that eventually went away but I would get it checked out.

Also @ang ive never had my tonsils removed but I have had back issues in the past.