Surgery advice - have I missed anything?

Has anyone heard from @M_UK lately?..

He seems to have disappeared suddenly, after the last post mid December

I continue to take it easy, keep taking the Paracetamol and Ibuprofen to stay on top of the pain and hope for the best. Will keep you updated as things progress. Take care

I’m still here. Unfortunately 3 months post op I still have not experienced any significant gains from the surgery. The next step is to have another CTV to see how things look but the wheels move very slowly with the NHS…

Oh man, so sorry to hear that… I know everyone here expects immediate relief and only some of us have it… Hopefully, things will turn right for you soon too, given that one of the impingement causes is gone now.
Besides the surgery, did the docs investigate any other less common causes like vertebral artery impingement, thoracic outlet syndrome, herniated discs?..

Yes I have discussed all of those things with Dr Higgins and he could not see any evidence of them apart from the jugular compression.

Thanks Kooldude for that info - forewarned is forearmed! Do you know which muscle? This is the muscle which I think is involved in my compression, because when I put pressure on my back at the mid point, around T5 T6, I feel all sorts of sensations in my right jaw, head and up into my ear.
Cervical spine: Anatomy, ligaments, nerves and injury | Kenhub 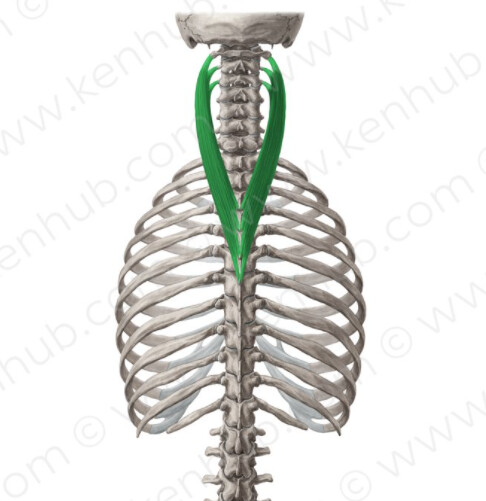 @DogLover i am not sure which muscle but you can see the one attached to the C1 atlas in the picture you provided is definitely involved.

If you really want to know what you & @Dontgiveup will go through you need to read the following section in Dr Axon’s study in the research area (Dr. Higgins & Dr. Axon : Spontaneous Intracranial Hypotension Complicated by Subdural Effusions Treated by Surgical Relief of Cranial Venous Outflow Obstruction). It details how Dr Axon does this operation and includes a number of muscles as well.

Hey Dog lover,
Scrambled eggs worked great for me! I hate to admit it, but I got Jimmy Dean Breakfast Bowls for meat lovers. They tasted good and only takes 2-3 minutes in the microwave! Didn’t have to hardy chew…goes down easy. My other favorite was macaroni & cheese. They both seemed to settle the stomach from pain meds and after surgery nausea. Not much tasted good but for some reason watermelon pieces tasted refreshing and they are soft. I went to a hair salon 4 days out to get my hair washed and it was a god send as I wasn’t up to trying to do it.
I dont recall if Dr. Axon gives out steroids for after surgery but this worked like a charm and kept my need for pain meds very low. I still use my wedge pillow as it does double duty for acid reflux. My 2 mini-doxie’s have taken a liking to the top of the wedge pillow since my ES surgeries so I made them a special bed up there behind my head. Dogs just know when their masters are not feeling well.

Im having oral surgery on St. Patricks day myself…Im nervous as hell because a tooth extraction last July set me back into major jaw pain…this after recovering from ES surgery in 4/19 and 12/20. The pain was so bad, I ended up in ER. I told my dentist, Id much prefer ES surgery over a tooth extraction! Pretty bad when you’d rather get your neck cut open than get a tooth extracted. You are in excellent hands and you will come out on the other side just fine. May the luck of the irish be with you on your surgery day!

So sorry that you’ve not seen improvements, really disappointing, I hope that the CTV shows something…thinking of you

Mac cheese - good call! I’ve just ordered some ready made as I’m too tired to cook any more. Also just added water melon to the order - that sounds a real good idea too.

My dog had a big procedure on his neck a while ago so maybe I could pinch some of his steroids (jk), I’ve got my eye on his gabapentin too!

I have my wedge pillow ready and several dogs to choose from (an essential part of recovery). Many thanks for the reply & very best of luck for Thursday. I hope you have your steroids at the ready.

I’m so sorry you’re still struggling w/ nasty vascular symptoms. It can take removal of both styloids for the symptoms to go completely away. I know you’ve read that here.
We hope when one side is opened up symptoms will decrease but sadly that’s not always the case.
I hope you don’t have to wait too long for the testing to see what’s going on. I still hope things improve for you.

I’m so sorry you’re facing more time in the dental chair, Snapple! I will pray for you on Thursday & going forward that you don’t experience anything close to the pain of last time around.

Hope your procedure goes well too

They just cancelled my surgery!

Unfortunately typical NHS…plans on hold again for you, I hope that you get another date soon, sending you a really big hug

It’s not NHS - it’s Mr Axon. Not postponed- cancelled! He said the brachiocephalic was more to blame they thought and my symptoms were too varied. To say I’m devasted doesn’t begin to describe how I feel. He also said there wasn’t a doctor in the world who would operate on the brachiocephalic at the moment.

OMG! Im speechless. After you get over the trauma of another defeat…pick yourself back up and keep fighting to get the care you need. Gotta keep pounding on the door. Unfortunately the light at the end of the tunnel is just a bit farther away than you thought. Hang in there DogLover

Thanks guys/girls.
Its just an implant. Im paying extra for an anesthesiologist because I was so traumatized by the extraction last year. I had a nice long chat with her and asked that they be gentle with my jaw as I think the extraction kicked up some bad TMJ and they may have over-extended my jaw. They say this is an easy procedure so I am hoping it goes well. I’ll be knocked out and I got some good pain killers all ready to go. I was thinking about asking for some prednisone…

@DogLover while I really sympathize with you and know how you feel at this moment ironically I happen to suspect that too as your IJV does not seem to be severely compressed by either the Styloid or the C1. This does not mean it is not compressed but not enough to cause the huge bulging collateral veins on the back and front of your neck. I am pretty sure based on the images I have seen that it is reflux from brachiocephalic more than the moderate compression of the Styloid and C1.

Please see this as a blessing in disguise as you have just avoided a surgery that could have ended up not improving your symptoms but might have even worsen your condition or introduce a new set of symptoms . If it was me I would have pursued brachiocephalic surgery wherever in the world that is done. Please don’t despair. You are in the right path to recovery. Dr Axon did not make this decision lightly I am pretty sure he looked at your scans and concluded that. The good news is you
know what problem is and I am pretty sure you will find a doctor that will be willing to do the
surgery
. I am praying for you.

@DogLover one plausible reason why feel worse when you stand up could be due to the Central Compression AKA brachiocephalic compression where all collateral veins (vertebral veins ) drain to. Since the BE compression is so severe they can’t drain probably when upright and the blood refluxes back up and causing all kind of issues from dizziness to spinal compression (myelopathy). The other reason could be that standing up collapses the BE compression even more. I remember you told me when you raise your hands it gets better or worse can’t remember it very well. The images you showed from catheter angiogram shows total occlusion of the BE, I wonder what Higgins thought of that in terms of regurgitation of the blood back up to the brain and neck.

Tributaries draining into the brachiocephalic veins:

• The vertebral and first, posterior, intercostal veins are in the neck.

• Internal thoracic, thymic, and inferior thyroid veins are in the superior mediastinum.

•On the left, the superior intercostaly vein (which drains the second and third intercostal spaces) also drains into the left brachiocephalic vein.

In some aspects I agree with you. The brachiocephalic is contributing more as the pressure gradients there are higher (but not much) and I would have pursued this if it was an option. However, I have a a lot of tension and discomfort on the right of my face, neck, jaw, travelling up into my ear and mostly at the back of the throat exactly where the styloid/jugular is. The pulsatile tinnitus is in my right ear too. All I can say is I know I have symptoms related to the right side because I can feel it. It’s perfectly possible yes that this right side compression would be asymptomatic, without the build up of pressure from the left side too, but the right side is definitely impacting substantially and incidentally, has the far greater build up of collaterals. Put it like this, if Mr Axon was in my body I’m pretty confident he would have proceeded.

Also, he stated that there wasn’t a surgeon in the world who would operate on the brachiocephalic at the moment. So the option of reducing the pressure on the right may or not have helped, but I now have no other options.

Unfortunately, the team in the UK are under pressure recently to justify their procedures. Mr Axon said that he treats the styloid process and pulsatile tinnitus primarily and that the fact that I have no other options is unfortunately irrelevant. So I could have this operation if I had fewer and milder symptoms it seems, even with the associated risks, and it’s far less invasive/risky than a brachiocephalic by-pass even if it were an option.

Mr Axon didn’t look at the scans again - that’s not why he changed his mind. The group had another meeting this week, where one of them brought up the brachiocephalic and so he called me and asked which symptoms bothered me most. He had not associated me with the patient booked in for surgery privately on Thursday and was calling as a follow up to my cat venogram on the NHS. What happened is they had a meeting last month where I came up as a private patient and they agreed the surgery and then they had a meeting this month where I was discussed as an NHS patient. It seems I prioritised my symptoms in the wrong order this time and sadly it’s as simple as that. More recently Mr Axon is trying to concentrate on the pulsatile tinnitus, which although pretty constant, I’ve learnt to live with, so it was not a high priority for me. The ballooning of the right jugular vein also gave me relief of symptoms for about 10 days which they knew about. The ballooning of the left brachiocephalic did the same, so not markedly better. I understand their need to be cautious and follow a strict protocol and I don’t doubt Mr Axon’s compassion, but with my knowledge of my own symptoms and the alternatives available I think this was the wrong call.

I now have to start again looking abroad for someone to help.