Hi there, I’ve been having symptoms consistent with vascular ES for a few months now, I’ve been been bounced around through a few specialists but they just refer me to someone else. The only clue as to what could be causing these symptoms showed up in my pan X-Ray as I was ruling out any dental causes. The dentist saw something they couldn’t identify and referred me to an oral surgeon who confirmed they were calcified ligaments, but didn’t think they would cause my problems. He then referred me to a neurologist and now I have to wait till May 30th to move this processes forward. I was unaware of ES until I googled information about calcified HS ligaments after my dental appointments. I know no one here is a doctor, but I thought I would post my dentals pan and see if it was at all similar to what some of you that have been diagnosed have seen on your own x-rays. 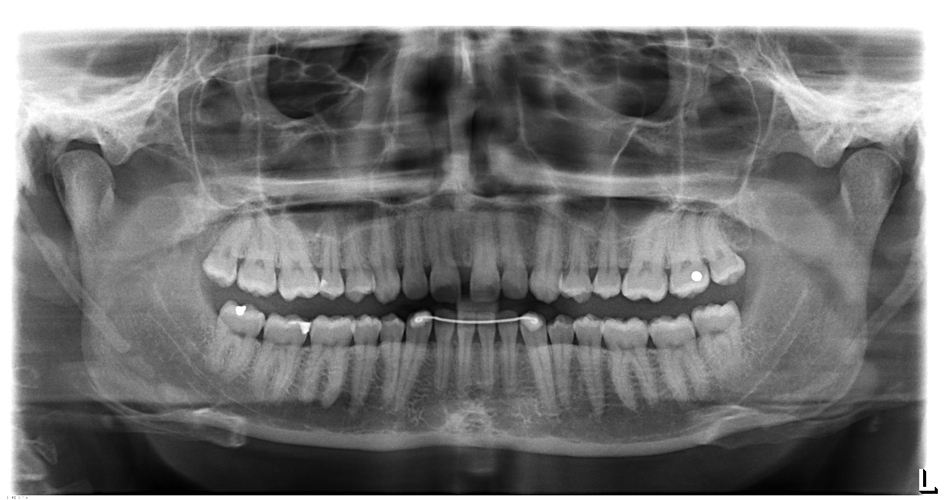 Wowee! They look pretty long & pointy / angled styloids to me! Like you say, we’re not doctors, but when styloids can be seen going down to the jaw line they’re likely to be elongated. Whether it’s the styloid processes that are long or whether there’s some calcification of ligaments as well you can’t tell. A CT of the head & neck would show more.
Have you had a look at the 2019 Doctors list in the Doctors Info section to see if there’s any experienced doctors you could be referred to in your area? That would save you being passed around again- a neurologist might be able to help with pain relief, but may not be able to help with surgery, which ultimately will be the only cure…
I hope this helps a bit, but am thinking of you while you wait for treatment, big hug!

I totally agree w/ what Jules said. Making an appt w/ an ENT or your PCP & asking for a CT scan to further clarify the finding in your pan x-ray would be a good next step. You would need to request that the styloid length be measured & calcification of the stylohyoid ligaments be noted if it exists. You might be able to get in w/ an ENT or your PCP sooner than w/ the neurologist. Having a CT scan of your head/neck between the skull base & hyoid bone will put you a step ahead when you’re ready to take the next step whether toward surgery or an alternate therapy. As Jules said, surgery is really the only “cure” for ES. A skull-based surgeon (often an ENT w/ a skull-based surgery background, or a head & neck surgeon) is the best for ES surgery. You want to find someone who will remove your styloids at the skull base & the s-h ligaments all the way to the hyoid bone as this will provide the best long-term results.

Thank you both for the kind words and advice. There aren’t any doctors on the list in my area but there are some in other parts of my state. I’m making an appointment with my PCP, hopefully he will help me get the process going. I have another health problem called POTS that took years to diagnose, hopefully this will move a bit faster. I am having a pretty tough time, the brain fog, headaches and light headedness are making it hard to function, I feel like I’m going crazy.

There have been people on this forum who’ve had POTS or POTS type symptoms & in some cases, the symptoms resolved after having ES surgery(ies). That would be something to hope for!

I definitely think the symptoms I have (headache, lightheadedness, poor blood flow) are being caused by my styloid pinching my carotid artery (vascular eagle syndrome).

I am hoping your POTS symptoms might improve after a successful surgery. I am awaiting my similar symptoms to fade away (12 days post-op).

Here is my CT. This is just one cross-section of my styloid process, carotid artery, and transverse process of C1. The styloid is a lot longer but you can only see one part of in this image. 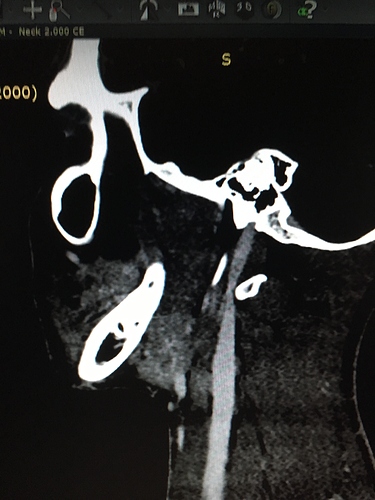 That’s compressing it alot- is this the side that’s been done? Occasionally the blood vessels don’t spring back so stents can be put in, but hopefully as you’re young yours will get back to normal with time!

Jimmy -
That’s impressive! No wonder you were so miserable! As Jules noted, sometimes the blood vessels don’t spring back, or they take their sweet time opening back up so symptoms linger post op. Hoping, hoping neither of these scenarios plays out for you but that your carotid artery is younger & springier than those in us “old” people & bounces back quickly.