I am in Australia, have consult and prospective surgery for vascular ES coming up in October.

I requested discs of various imaging over the years, all to see why I was experiencing terrible vertigo, neurological symptoms, pain and then following 2nd accident, tia/mini-strokes when I turn my head or look down.

The surgeon has seen the CT angio and xrays done last Jan 2015.

I would love to compare jpegs of same angles on xray cspine and hear your take on some of the images…I know nobody can diagnose or anything, already diagnosed, but would love to know if anybody else has such obvious calcified bilateral ligaments on plain xray? Also, following 2nd accident, images from a month later in July 2012, kinda looks like the calcified ligament is broken?

is it just me, now that I know what to look for, or are my ligaments VERY obviously ossified in the images all the way back to 2010? 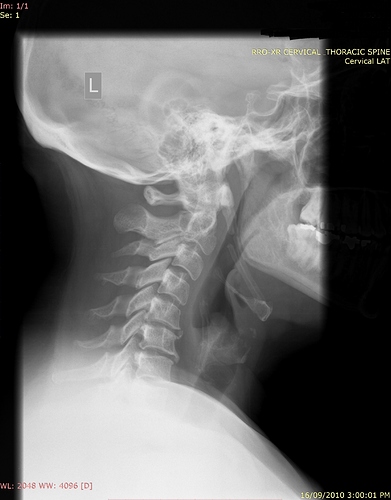 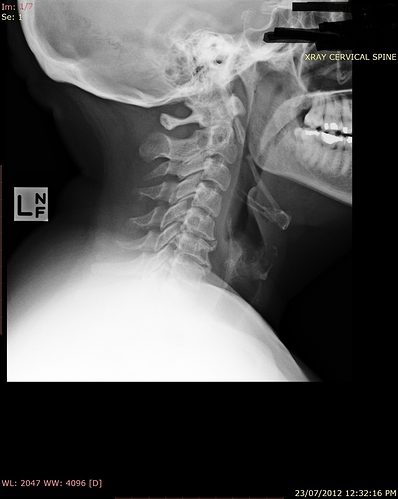 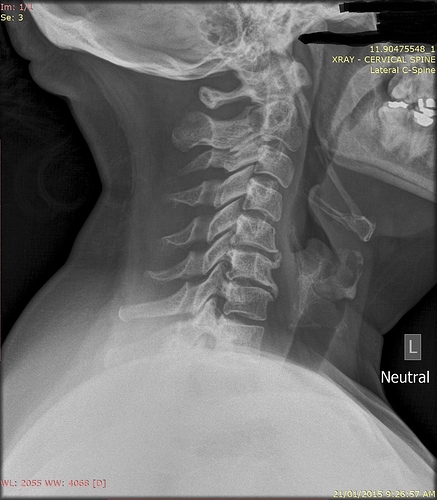 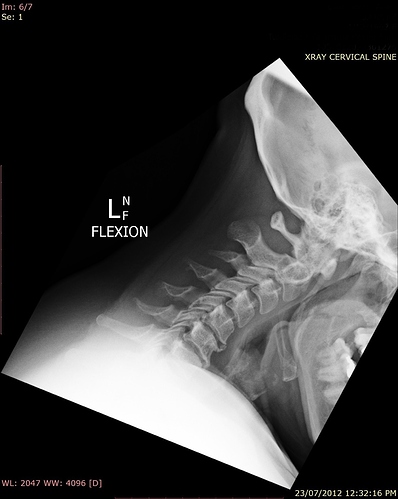 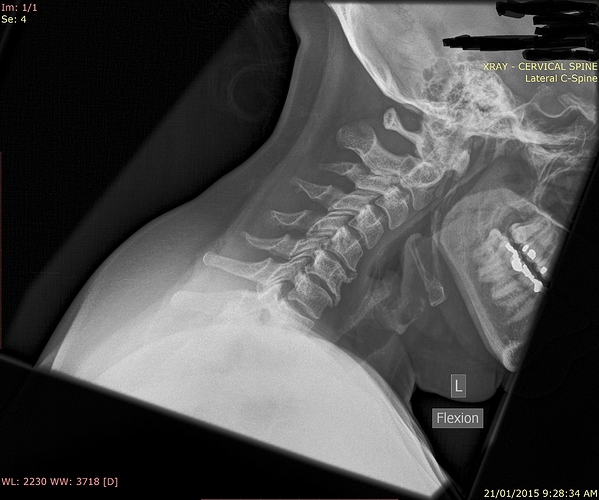 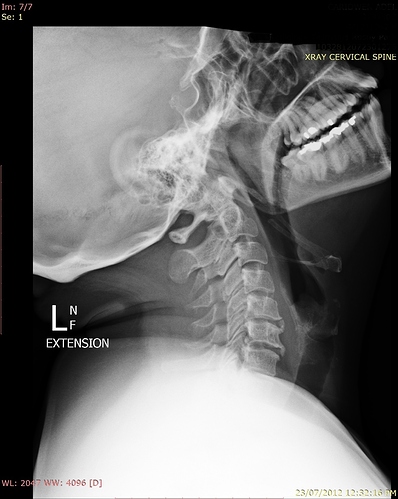 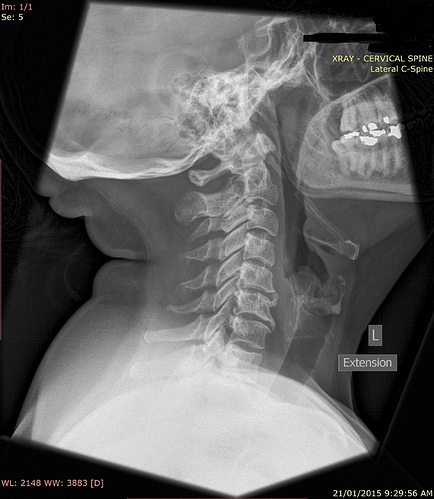 Obviously not being an expert… but it does look like the ligaments were calcified back in 2010, yes! And it does show why you’re feeling grotty when you move your head! It’s interesting how much shows up in a plain old x-ray too. Frustrating that nothing was spotted way back 6 years ago!
I can’t compare your images with mine- I didn’t get copies and they took the CT from a different angle, from the top of the head down in slices.
Must be a real relief to know that you’re diagnosed and have a surgery date now- lots of info on here about what to expect, I’m sure you’ve probably seen it already!

What kind of doctor does the surgery? I have Eagle Syndrome on both sides. I am having already neurological problems and I am very scared about what can happen while I don’t find the right doctor. My life is going from doctors to doctor and none solve my problem. Getting desperate and depressed.

A lot of people see ENT’s- they seem to do surgery intra-orally often. Otherwise you could see a skull base surgeon/ otolaryngologist- they usually do external surgery. Some people have had surgery with neurologists or vascular surgeon- as long as they’re experienced in operating in that area. Have you checked out the doctors list?

Hey Vanessa, mine is bilateral too, I have spent a solid 4 years going to doctors and specialists all over the country here in Australia, all the time, really sick from this. I only heard about ES a few months ago and looked at my images and what it was and it fit. I asked my GP to write to the last imaging place that did CT angio back in January 2015, to get them to look at the styloid process and they wrote back to say yes it was consistent with ES. From there, I researched which ENT surgeon here in Australia was the best at the vascular type and just pushed and pushed to get a referral.

I can only suggest, finding what things really trigger your symptoms and trying to work out how to avoid much of it, while you find the right Dr, can help. There is a list of Drs on the site here depending on where in the world you are.

Impressive stylohyoid ligaments, Della! My ligaments were only partially calcified & looked like dotted lines in my CT scans. My styloids, however, were pretty long & they were the trouble makers. I’ve included pics of a couple of scans below: 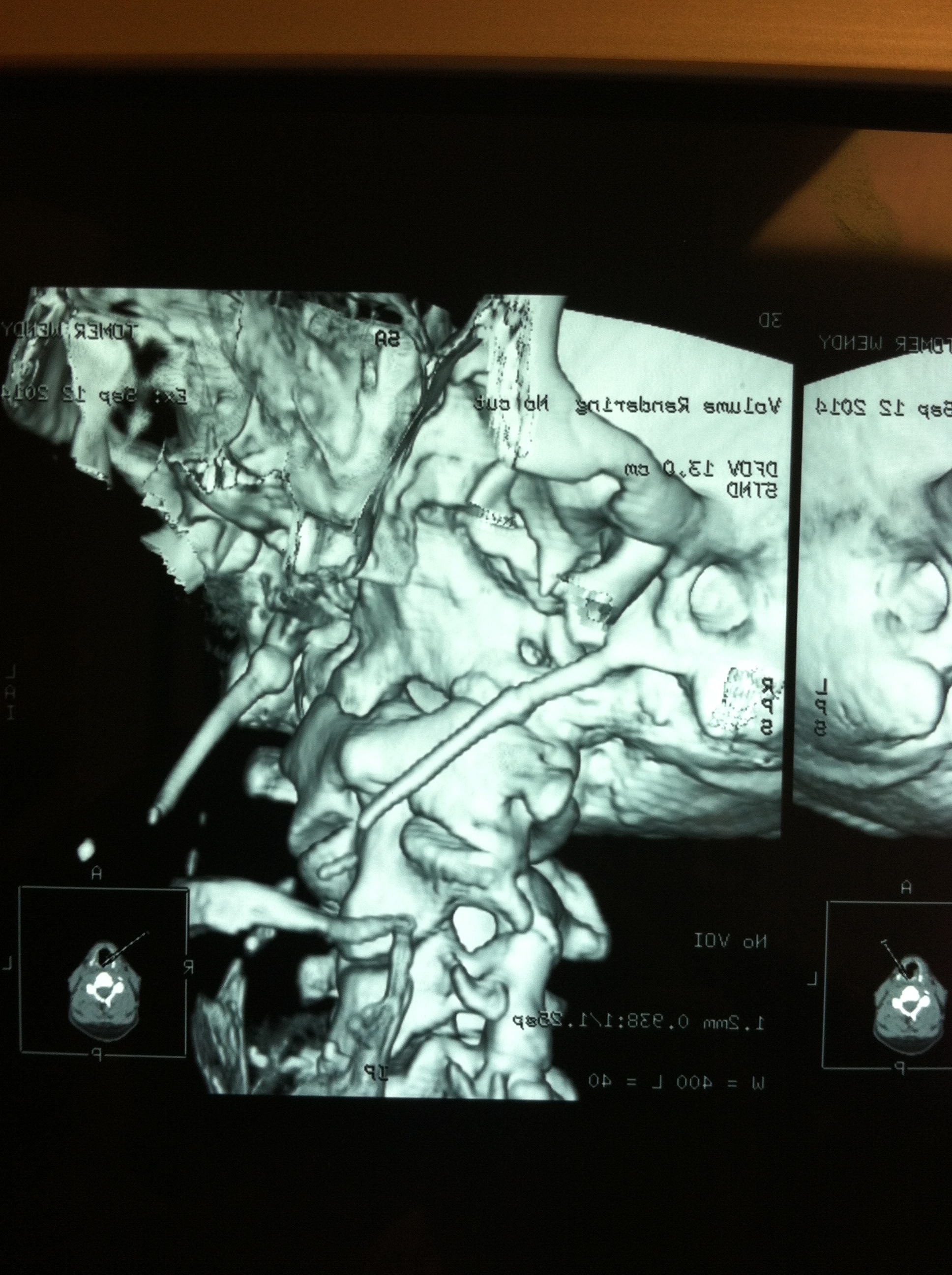 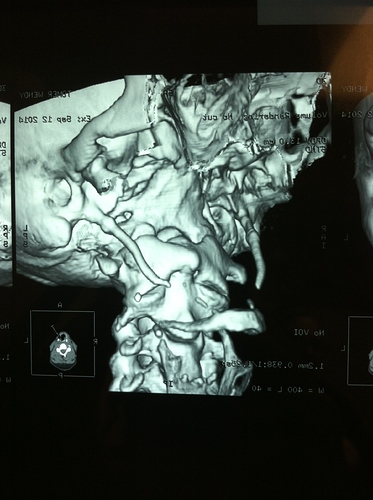 I still haven’t got a 3D render from my CT angio January 2015, my pc is only 32 bit so the program folks use is not doable for me.

the surgeon says the styloids are elongated and ligaments entirely ossified bilaterally.

Our insides are TOTALLY AWESOME works of art. It’s astounding to me how complex our skeletal structures are especially skull, neck & spine.

Clearly we are “fearfully and wonderfully” made. God’s works are wonderful!!
(excerpt from Psalm 139:14)

So glad you your appointment is coming soon! I hope you have immediate relief from your symptoms. I will continue to pray for you. 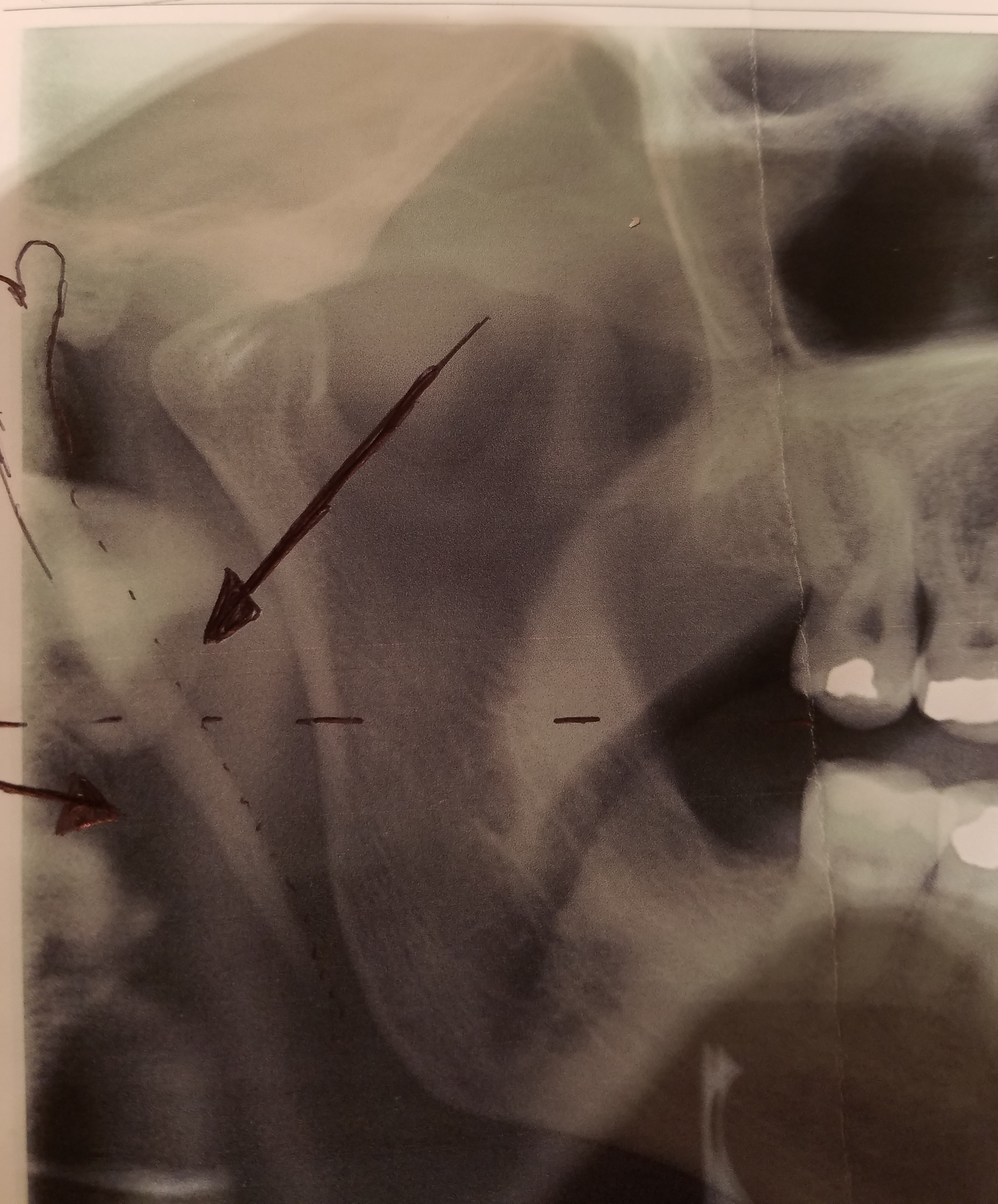 Shows well for an x-ray! So frustrating that you’ve had to wait so long to get help…

I did the 3D render on the radiant viewer and can see them better, pretty shocking that nobody noticed. I had CT done in 2012 and then the CT angio in 2015 January. Will pop a couple pics on from that. It looks pretty bold to me, like my right jugular is impinged as well. I had another tia on Monday last week, nobody noticed me slurring and confused when I was up in the village here. It wasn’t till I got home and rang a friend and she was worried about my terrible slurring. 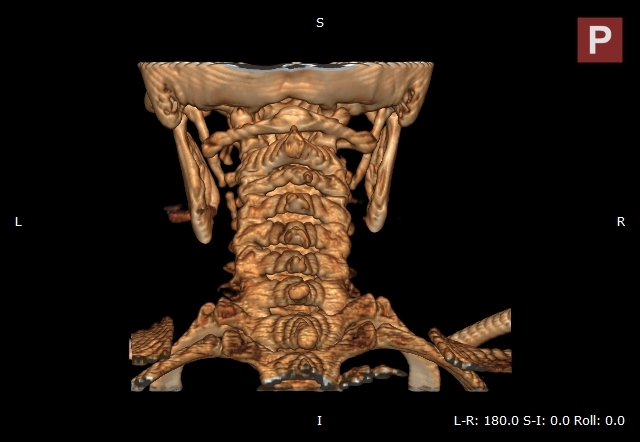 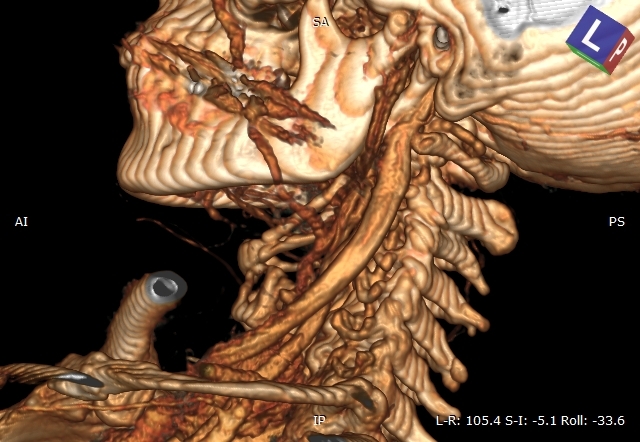 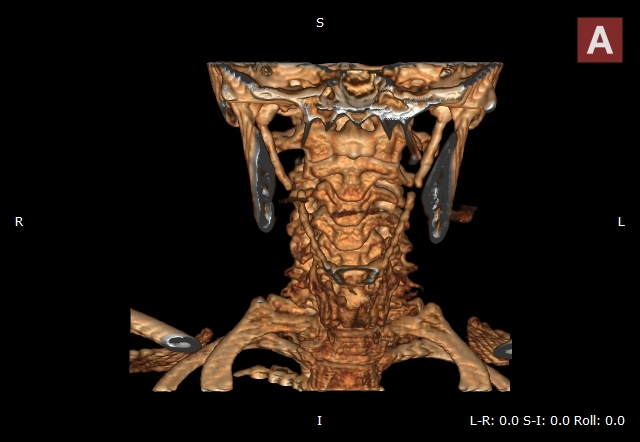 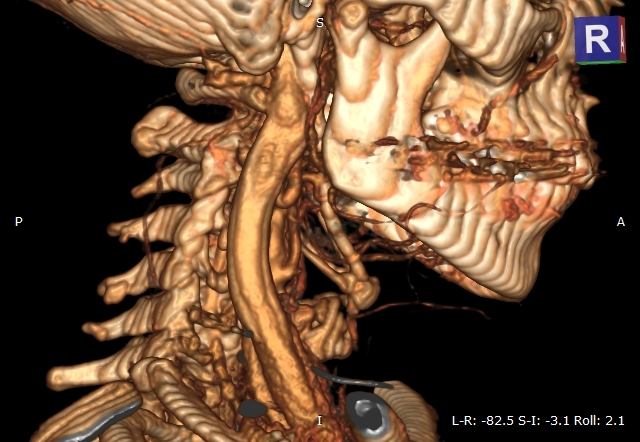 Sorry I’ve been absent from email for a bit. I was on vacation & without internet for the last 2.5 weeks. Finally starting to catch up now.

Your pics are amazing! YIKES! Your styloids are very long. I suspect you may be having or have had surgery by now. (I feel very out of touch w/ all that’s gone on w/ people on this forum in the last 3 weeks!) I recall you had your appointments scheduled for the end of October.

Please let me know how you’re doing when you’re able. I am praying for the best possible outcome for you! You are one very brave woman. I am glad you have friends who look in on you & hope they will be there for you to help you as you heal from surgery.