I just joined this group and was hoping maybe to get some feedback on my styloids. I randomly discovered them in an unrelated CT scan 6 yrs ago but didn’t elect to pursue treatment or follow-up on them. I know they are long and the thought of them creating issues makes me want to have them removed. The right styloid is 52mm and the left is 55mm.

I’m not sure what problems they are creating, but I wouldn’t be surprised if they were.

I can turn my neck from side to side but I still consider myself to have a chronic stiff neck. I know it could be anything.

Would I be better off getting them removed? I am located in FL and I know there is a reputable doctor in central FL. Should I book an appt with him directly or go through the general physician first?

Thanks for your time, 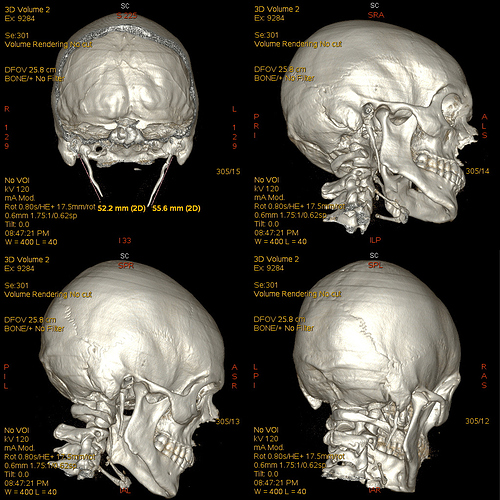 Oh, they look long & nasty & pointed! In the Newbies Guide Section there’s a section about common symptoms with ES- I think it’s called ‘ES Info- common symptoms & what might cause them’. It’s worth a read if yiu haven’t already as sometimes there’s symptoms it causes that you wouldn’t realise- like dizziness, ear pressure, sore throat, facial pain, ear pain…I did find my neck was painful if I had to turn it alot or keep it turned, but never had trouble swallowing or the common feeling of something stuck in the throat. I had alot of tooth, jaw pain, facial pain too from pressure on the Trigeminal nerve.
I think it’s a difficult call about surgery- it is a tricky op, & there are risks, although these are lessened if you see someone with experience. If the styloids aren’t removed right back to skull base they can still cause some symptoms & very rarely grow back. It would be a good idea to read up on the surgery risks (Info in the Newbies Guide Section again), & also read through lots of the post-op recoveries on here, then you can decide whether your possible symptoms & quality of life outweigh the discomfort & risks of surgery.
Hope this helps!

madisonvessels
Those are large!. Read more and you may find that you need to have them removed. Most doctors believe you should leave them alone if they are not causing trouble and I would say that to be true. However, if you are feeling uncomfortable, I suggest you educate yourself with all the newbies information and be prepared to get them removed if they are causing problems. I believe you will find that it may take some time to get to an operation, so being educated and having a plan will get you there more quickly. Also, note that this is an elective surgery and there is no tellling with this pandemic how long elective surgeries will be on hold, so there is no reason not to do your homework.
Unless you need a referral to go to an ENT or specialist, just book an appointment with the ENT. Your pictures will get his attention for sure.
As you can see clearly in your scans. Your styloid sits on about the same plain as the C1. You probably have some stiffness from this. My C1 is always blamed by chiropractors and therapists for being out of place, thus causing the stiffness. My neck became increasingly painful and stiff and I was always told I had a tight dura tube. I still am not sure about the tight dura tube, but I got to a point where I could not lie down because my skull hurt so badly. I had sore throats and ear pain at first, but after my first partial surgery, things eventually got way worse because my nerves were decompressed still. I did get the feeling of a swallowing issue early on but after tests, no diagnosis was made for another 3 years.
With those long styloids, it is highly likely the stylohyoid ligaments
are calcified as well and they do not show up in scans because they are not bones. If you have pain, you want to handle it as quickly as possible, because I am convinced that my long term neck pain that is still causing issues from the nerve and muscles being impinged. It has been 1 year since my last surgery and 18 months since my first external surgery. Good luck.
Please tell me what doctor is in Central Florida. I went out of state.

WOW! Those are some very long styloids. I don’t have much to add to what Jules & emma said, except that some of the doctors who acknowledge ES expect certain symptoms to be present before they’re willing to do surgery. This isn’t right as each one of us has a different set of symptoms from ES. The symptoms come from irritated cranial nerves (up to 6 out of 12) that “live” near the styloids &/or pass through the neck in that area. Skull pain/migraines to heart/blood pressure issues to gastrointestinal issues & excess anxiety plus many other things are caused by either nerve impingement or vascular constriction caused by the styloids &/or calcified stylohyoid ligaments.

If the doctor you choose to see is dismissive or doesn’t offer a surgery where the styloids are removed back to the skull base (external is safest & provides the best opportunity for fully styloid removal) then you should get a second opinion. I’m providing the link for our doctors’ list below.

US Doctors Familiar With Eagle Syndrome 2019: THIS IS A LIST OF DOCTORS WHO HAVE HELPED SOME OF OUR MEMBERS FIND SOLUTIONS TO EAGLES OR WHO SOME OF OUR MEMBERS HAVE HEARD OF. The list is not exhaustive. The intent is to provide a starting point for those of us looking for solutions. THESE ARE NOT RECOMMENDATIONS! Some of these doctors have worked for some members, but not others. Please use your own judgement when determining which doctor to use. Alabama: •Dr Joseph Brigance, 201 Whitespo…

How do people get access to their scans and xrays? I have been unsuccessful. I wish you all the best. While I’m grateful to have been diagnosed, I am completely in the dark about the details of my case. My doctor discussed nothing with me before or after. Literally never even interviewed or examined me. My dentist diagnosed, referred me. Ct scan done, ENT viewed results, scheduled surgery…and bam…here I am post surgery. Literally all that I have learned, I have learned here.

Thanks for the advice, much to read and understand from your site. They were in the way for a cosmetic procedure I was scheduled for, so the surgeon said get these fixed first and I ended up calling everything off and forgetting about it until now…

Thanks for the awesome info. Did not know about the C1 aspect and I think I will see an ENT first. Also, with removal considered an elective procedure, insurance doesn’t cover it? Even if there is pain and difficulties from the styloids? That’s an aspect I’m going to need to get sorted.

Thanks so much for the list of doctors and advice on second opinions. I can see why this website/group exists as it’s not a straight forward issue to deal with clearly.

I actually got these scans when I was working abroad so I guess I lucked out. They gave me hard and soft copies, videos, etc. total cost out of pocket without insurance was 100 bucks.

ES surgery is elective BUT can be billed as a mini-craniectomy (which is what it is if the styloids are removed back to the skull base). My insurance had no clue what Eagles Syndrome is but were willing to pay for the mini-craniectomy. Most doctors experienced w/ ES surgery know how to bill insurance for it so insurance pays. It is not cosmetic surgery & can make the difference between a person lying in bed all day in a world of hurt or being functional, active & living fully.

You should be able to get a copy of your CT scan from the radiology clinic that took the scans. Most will give you a CD w/ your pics on it. Some may charge a fee, but you’re entitled to them so shouldn’t be declined when you request them.

Good to know. Thank you.

Madisonvessels, I need to be clear,you realize that the styloids are just behind the ear and the C1 is near the center of the skull base, but pain in that area of the spine does cause much inflammation and tenseness at the skull base.

shayney You should still get a copy of the CT scan to keep and if it is not 3D, you can get 3D slicer for free still, I hope and use the tutorial to look at your styloids. You can take a cell picture of the images as you cannot save them. It is a done deal now, but if you have anymore problems as I did, you can use those to compare with what is left if you need to. I make a point of getting a copy of every CT, MRI and Xray as well as the reports because they come in handy when you need a second opinion or have questions of your doctor.

I live in Florida and Dr Arnold at the university of Miami did my surgery. With that said if you are not in pain I doubt any doctor would remove as elective surgery. Every surgery has complications you don’t want to take if your Eagle Syndrome is not causing you distress.

Hi Emma, Thanks for the info on the location! Now, I am immediately more concerned. I went to the doctor a few weeks ago to have him look at a bump which I’ve noticed on my neck adjacent to my right ear lobe (almost where the detached ear lobe connects back with the neck). He said it was probably a cyst and decided not to address it right now. I don’t know what a cyst feels like but I can say this is pretty hard and fixed in place- I don’t mess with it. Considering these CT scans were from 6 yrs ago, I wonder if this is a styloid issue that has developed?
I guess we won’t know until the virus is past us or until doctors resume business as usual. What do you think though?

Hi Ann, was your procedure covered by insurance at UM? Were you having issues from ES?

Hi Isaiah, That’s great info to keep in mind. Thank you. And yes I didn’t mind paying that amount. Believe it or not, the local who brought me to the facility balked at the price and tried to negotiate it down on my behalf, even though I was thinking, it’s fine, it’s fine. Actually was about $85 come to think of the exchange rate. Also there were X-rays.

Lots of members have had enlarged lymph nodes around the neck, possibly down to inflammation by the styloids we wonder? Could be that…

I cannot say anything about the bump as I am not a doctor, but I will say this. That is an area that had been painful to me both before and after my surgeries. Both sides are much better now.

Best to leave it alone for the time being if you can.

Ann, I hope you are still on the post.I am going to message you