Hey all thanks for taking the time to read this. I had my second CT (first done in 1999 which I’m still trying to get access to) on Monday and got the results yesterday. The ENT didn’t have much experience so he gave me what information he could but said I would probably get more answers from Dr. Aninno. I’m posting the results and hopefully someone has a relatable case and can help me understand the detail better. Thanks again! 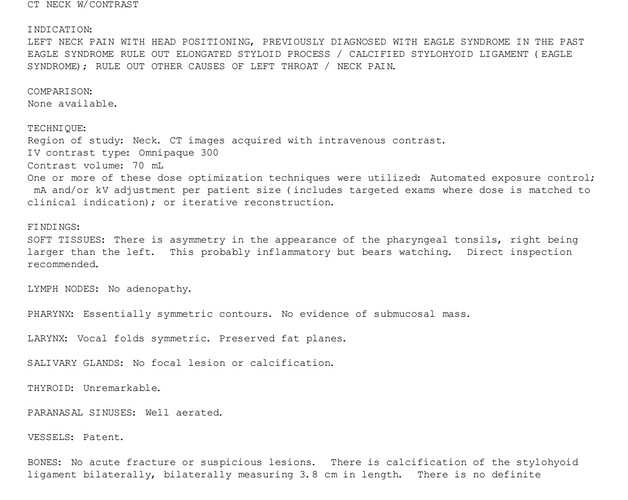 It confirms that the styloids are elongated &/or the stylo-hyoid ligaments are calcified; with radiology reports they can use elongated styloids & calcified ligaments interchangeably, you can’t always tell where the styloid ends & the ligament begins when it’s calcified.
Interesting that there’s inflammation in the area & the pharyngeal tonsils- whether the styloids are causing this or not would be interesting to ask, or whether there’s inflammation in the area & that’s what’s contributing to the ES…
I hope that Dr Aninno can help!

Thanks for the information! It was very helpful!

I had surgery with Dr Annino. Just as a heads up he doesn’t typically go to the skull base. He’s a nice surgeon but very difficult to track down sometimes.

Thank you for your input, @Msdstc. We have had a number of members who have had successful surgeries w/ Dr. Annino, but no doctor “bats 1.000”. It’s good for our members to know that.

I’m unfamiliar at this point with the types of procedures to be honest. Can someone explain why or why not to to the base of the skull?

Depends what your issue is. There are cases where the styloid can grow back, and in my case I have vascular eagles, where the higher end of the bone is applying pressure to the jugular vein. For some people all they need to do is take a little bit of the styloid and it’s all set.

I will say this. I’ve had 2 surgeries. My second was with Annino. His surgery was extremely quick and the incision was tiny. He’s a great surgeon, I just don’t think he fully grasps the vascular nature of the condition.

Good to know. The ENT mentioned that my carotid artery appears to be wrapped around the styloid but he wasn’t sure of the significance. He was going to speak with the radiologist and get back to me. Hopefully I’ll hear back tomorrow as my BP has been really high and uncontrollably with medication.

In my non-medical opinion, if your carotid artery is wrapped around your styloid, it is possible that the styloid won’t need to be removed to the skull base to resolve your symptoms. It will need to be cut back sufficiently to release your carotid. Generally we’ve found that having the styloid cut back as close to the skull base as possible gives the best results as it relieves pressure on nerves & if vascular tissues are being compressed, even part time, it allows them to re-open. However, as @Msdstc said, there are definitely cases where leaving a bit of styloid has still provided excellent results.

The occasion where we most often see regrowth &/or no resolution of symptoms is generally when the styloid hasn’t been cut back enough i.e. the tip has been snipped but styloid hasn’t really been removed. For people w/ vascular ES, especially jugular compression, it’s more important that the styloid be removed as close to the skull base as possible as the transverse process of C-1 & the styloid often “team up” to sandwich the IJV between them, thus styloid removed can help to take pressure off the IJV & resolve symptoms it causes when compressed. Risk of nerve damage (especially the facial nerve which exits the skull very close to the styloid point of attachment) is another reason some doctors won’t cut all the way back to the skull base.

I had one styloid removed to my skull base & one that was not because of risk of permanent damage to my glossopharyngeal nerve. I have had excellent results from my two surgeries even though only one styloid was able to be fully removed.

Thanks for all the great info!

I spoke with my ENT again today as he needed to discuss my ct scan with the radiologist in regard to my hypertension. He informed me that in addition to an elongated Styloid I also have an elongated Hyoid. He didn’t provide any other details other than “elongated”. He said that on my right side it was between my internal and external carotid and on the left side it was in front but unsure if it was touching. He asked if I had any dizziness or was ever lightheaded or had any type of weakness of which I have none. Over the past 3 or 4 years my blood pressure has been on the rise and most recently very high with limited improvement with medications and diet. I have not been as active or as strict with my diet as I could be so I’m not ruling out my hypertension being unrelated to ES. Based on what reading I’ve done if my Vagus nerve is being affected this could cause hypertension so should be considered.

I have to say I was surprised and frustrated to hear the ENT tell me that my Hyoid bone was also elongated. Surprised because I was not aware that this could happen and frustrated that it wasn’t mentioned in the radiology report. On top of that I was informed that I also suffer from retropharyngeal carotid on my right side and that if anyone was to perform surgery on my neck or throat would need to do a detailed scan to confirm its location. This also was not in the radiologist report. I told the Dr about an episode I had this last December when I had a sharp pain on the left side of my throat when I would turn my head and talk. It almost felt like a wound or burn that was being touched, very sharp paid like a muscle spasm but no spasm. Over the course of 4 or 5 days it slowly got better and went away, like it healed over time. The Dr had no idea what this could have been and really had nothing to say about it, but he didn’t think the new information changed our plan of action, seeing Dr. Aninno which I’m waiting to hear from his office.

My plan now is to get a copy of the actual CT scan so I can look at it myself and post it here for discussion so I can start understanding what is going on. I also hope to locate the original scan done in 1999 when I was first diagnosed which I now have a lead on!

The pain in my jaw, neck and shoulders is getting worse by the day and the pressure headaches are coming much more often. Hoping that the more I learn and understand the better I can address these issues until they can be address surgically. Please let me know if you have any questions or any advice on what questions I should be asking! Thanks again for the support.

Having an elongated hyoid process does complicate things- I suggest you ask when you see Dr Aninno whether the stylo-hyoid ligament is calcified upwards from the hyoid, it can calcify the whole length, or we have had some members whose stylo-hyoid ligaments have calcified just a bit up from the hyoid. It sounds as if the elongated hyoid process could be causing symptoms for you, so whether it’s possible to have it shortened too? Obviously you need to clarify with Dr Aninno about the location of your carotid artery before surgery, it may be an idea to have a CTA done. Was it a CT with contrast you had?
It does sound as if the radiology report was very sparse on the details!

Yes it was a CT with contrast. It’s clear to me that neither the radiologist and ENT didn’t really have a clear understanding of what to be looking for and relating that to my symptoms. Since it is so rare and I’m being referred on I think they just did what they could to confirm abnormalities and let the referral Dr deal with the details.