Do you think it's possible to touch my styloid there? ( Photo )

Do you think it's possible to touch my styloid there? 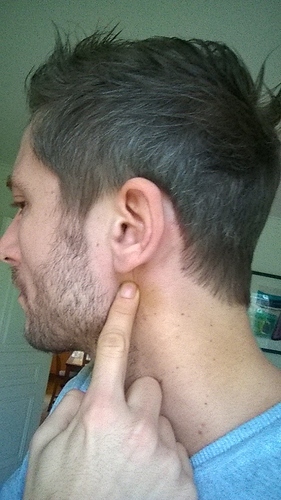 Usually people have felt their styloid process poking into the throat behind the tonsils, so more inside. I will message one of the other members who might have felt theirs in a strange place for you!

I was just feeling there on the side I had surgery Sept 1 and I feel pain there. It's not the actual styloid, but it's pain related to it. So I think it's very possible to have pain there. Do you feel a hard bony-like thing there - or is it pain? I can't remember - on your CT scan, wasn't one of your styloids angling backwards by your cervical spine?

YES! I could feel my styloid process in my neck just under the curve of my jaw. That is actually what alerted me to the fact something wasn't right in my body. I was getting this odd shooting pain in my neck & poked around & found this hard lump slightly under my jaw which, when I poked it, made my neck hurt. I asked my primary doctor about it. He thought I had a clogged salivary gland & prescribed antibiotics. Then I asked another doctor, & she said it felt calcified & recommended I should see an ENT. The ENT doctor identified it immediately as ES then sent me off for a CT scan to confirm it. The CT scan showed bilateral ES though I only had the external symptoms on one side. I have had 2 surgeries - one on each side to have the styloids shortened & the stylohyoid ligaments removed. The repercussions of surgery have been first bite syndrome on the right side which has decreased in intensity over time but not gone totally away, & I'm having a little trouble with swallowing (i.e.liquids get down my throat too readily & I choke on them) as the stylo-hyoid ligaments do help in a minor way with swallowing. Otherwise, having had the styloids shortened has been life changing for me because all the other awful symptoms are mostly gone.

I hope this is helpful info for you you.

yes I feel something very hard as a bone.
I have an appointment with a surgeon Barcelona, which is in the listing.
I will keep you informed

I'm glad you have an appointment with the Barcelona doctor. He sounds pretty good.

I could press around the area in the picture and trigger some of the trapped nerve sensation I've had occasionally, but not always. For me, I could always trigger the pain by pressing the styloid, i.e. by putting my finger in my mouth and pressing the bone to one side.

Yes it is, touching this area caused cough to me.

I’m not a doctor but I suppose pushing that area cause moving of styloid process and touching throat which cause cough.
My styl.proc on the right side is out and that area is very painfull. Surgery was 6 day ago.
But on left side, I can feel some movement inside mandibula and neck when I touch that area. Left styl.proc is not causing problem to me but I can feel it.

Hope that you heal soon Antonija! Who did your surgery?

YEP! That’s the spot! Can probably feel it inside your mouth as well, assuming your finger is long enough, the styloid is long enough and you can keep from gagging.

That area has a big bundle of muscle connections and nerves, a lot of which can be irritated by ES.
It seemed I could feel mine too in that area, and pressure there caused a lot of symptoms, but my scans showed me it was too deep in my neck meat for me to be poking. There’s some Crazy images people have posted tho, and I have no doubt some people can touch that monster.

Pushing on it can break it. Best not to push on it. I was doing that and my doctor told me to stop.

Hi was your surgery intra oral or external? As i thought first bite syndrome was only with the intra oral i read it is very painful and puts me off.

I had external surgery. First Bite Syndrome can (but does not always) occur after surgeries in the neck/throat area. For some reason, nerves which excite the Parotid Gland (your largest salivary glands) are irritated by the surgery & become over-reactive as healing occurs. In FBS, the Parotid Gland fires inappropriately as you take your first several bites of food causing the jaw muscle to spasm on the affected side. The spasm quickly subsides but does cause discomfort/pain for a few seconds before the spasm stops. I will say it was pretty awful for the first couple of months, but it dulls down & gets less painful over time. There are people whose nerves fully recover and all FBS symptoms go away. Although I was not one of those, I can live w/ the symptoms I have left. They are FAR, FAR better than living with the pain & other complications I had from ES.

I am being honest but hope not to further deter you from choosing surgery for ES. If you end up w/ FBS as a result of ES surgery, the pain can be treated w/ Neurontin or other anti-seizure drugs.

I agree- the annoyance of first bite no way compares to the pain of ES! I had external surgery and have first bite not too badly, both sides. It’s better than it was post- surgery, and even now comes and goes, but it’s nothing compared to how bad I used to feel!

I have a hard bump in that exact spot too, on both sides! I