ES Or not? I still don't know

Sorry my English is very bad. It's normal,i'm french !!

I'm living a nightmare actually because of my pain.

My symptoms : all my muscles of my neck ( left side ) were and are still hard, very very very hard, anormaly hard. And i can feel just Under my left ear something very hard ( elongated apophyse??)

It's a nightmare actually.

Im looking for a surgeon in europe to tell me exactly what is the problem!

In France, they don't care of your pains! Unbelievable!

Sorry to hear that you're in so much pain, Maxence. We can all sympathise with that on here, and with the struggle to get a diagnosis. At 3cm, your styloid processes aren't that long (the 'average' length doctors use is 2.5-3cms long, so anything over that is considered elongated), but research- and members- have found that it's not just the length which can cause symptoms, but also the angle which the styloids grow too.

If you're able to translate it, in the ES Information section there's some detailed info about different symptoms, and what might cause them. There's also a link to a survey one member did a little while ago to see what different symptoms we all had: http://forum.livingwitheagle.org/forum/topics/results-eagle-syndrome-survey

The problems with your muscles being hard could be due to inflammation; I know I have really painful muscle knots on the worst side. Anti-inflammatory medication or muscle relaxants like Baclofen can help. Depending on where the pain is coming from, medication for nerve pain can help (like amitriptyline or Gabentin). Snappleofdiscord has posted recently that Lidocaine patches can really help, and some members have tried Lidocaine or steroid injections into the area of the styloids. Again, there's more info in the same section.

Did the doctor say anything to you about your scan?

I don't think that there are any doctors on the list in France I'm afraid! Most members have to travel to see the right doctor- I know that there's a couple in the UK, and I think one in Sweden. Have a look in the Doctors list on the top menu bar- otherwise most people see either an ENT or skullbase surgeon- you could do a search to see if there's anyone else you could see closer to you.

my doctor doesn't care!! I do, search by mysellf.

I need to do a 3d scan to see if the angle of my left apophyse is the problem.

For my muscles very very hard, AINS doesn't work. My muscles are as hard as the bitume! It's not normal.

And i feel my apophyse behind my left ear, but not on the right. Not normal too.

and you june? have you been operated for an ES?

DO you know the name of the open source software to translate a scan to 3d scan?

I'm sorry you are going through this. It's very hard and it's even worse when doctors don't understand. Is the doctor in Spain you mentioned Dr. Maiz? He's experienced in Eagles so that would be a very good option for you. There are a couple doctors in England too who are very experienced.

I'm one of the people who had pain from a styloid that was not very long so it would probably help to tell him that other people here have had lots of pain and problems from calcified styloids that were not that long. In fact, I had pain from a 2 cm styloid.

I recently read on the forum that Dr. Samji, who is one of the most experienced US doctor for Eagles, changed his criteria for Eagles to be 2.5 cm or more. So that would probably be good to mention to the doctor too.

There's been a couple of discussions about software; I think you can google it and look, or otherwise I've found a discussion where this one was recommended:

since you have the copy of your ct scan you can always try this software http://svn.softwarepublico.gov.br/trac/invesalius/wiki/InVesalius/D... it's free and you can see your CT scan in 3D !! give it a try

3D Slicer is what I used. It can be a little confusing at first, but comes with a lot of tutorials, and lots more online. A bunch of medical professionals and students use it for imaging, so you can likely find specifics of what you're looking for.
There are other programs also, so do a search for free programs that can turn DICOM files into 3D and you should be able to find one that works for you.

Please, message me if you have any questions about using Slicer or getting it to work. I would be happy to help.

DO you know the name of the open source software to translate a scan to 3d scan?

yes, i called mr MAIZ yesterday. The secretary told me to send my scan by mail, and they will call me back.

Question : Can you feel your calcification by touching your neck with your finger ? In my case, i think that other muscles are calcified with. And i think that the angle of my left styloid is not good. I feel it Under my ear.

I Will do a scan with 3d reconstruction this thursday. Is it better to do scan with an injection to see more things ou is it not necessary? 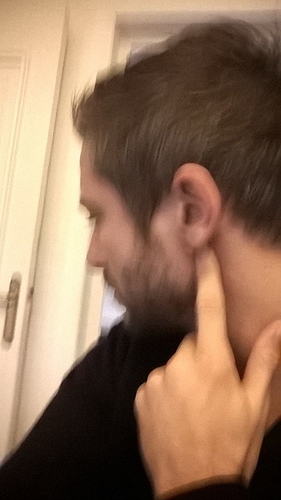 If you can get a scan with contrast, where they inject the dye into your veins and then do the CT, yes, that is best. That way they can see if the styloid processes/ or any calcification of the ligaments are pressing into any of the blood vessels in that area. And if you can get a copy that will help you if you want to send it to other doctors. Good luck!

On a very interesting dentist french blog, it was written that ES was due to stress, because of more intempestive action of the jaw which induces a calcification of the ligament

Ha- we'll all be worse then because of the stress of trying to get a diagnosis/ a doctor to help!! Seriously do they mean stress as in clenching the jaw/ grinding teeth etc? I've never seen that suggested in anything I've read.

Where you're pressing, I've always had pain in that area. There's lymph nodes in that area, and also the parotid gland- it may not be the styloid but maybe inflammation in either of those glands causing them to be hard and painful?

In the article : " Longer styloid processes is under the effect of the traction of the jaw muscles that insert it. So we must consider in these cases that there is a tension in the jaw muscles and a passive or active bruxism.
it is the excess of bruxism which lengthen styloids pulling the digastric that inserts thereon and three other muscles of the tongue and pharynx. "

I think in the article, he said that in some cases, the elongation of the styloid apophysis and calcification is due to bruxism, but only in some cases

Would you be able to post the link? Thanks

I hope that the3D scan will show something wrong;;;;

Hi Maxence. Sorry you’re going through so much pain. I’ve been 9(!) years with Es pain. The last three years have been quite tough and stressful, and I’m still without a definite diagnosis. I’m Norwegian, but live in Spain. I contacted dr. Máiz in Barcelona in February with my CT scans. Based on those I was diagnosed with ES. However, when I traveled to Barcelona for a consult he wasn’t so sure. The reason for that being that the length of my styloids are just on the limit (in 2013 the scans showed 3.1 and 3.7 and the most recent from October showed ca. 3 cm. Don’t know which is right. I find it odd that they are measured shorter now than two years ago .) Mine are calcified but not 100 %. Based on that he recommended not to have surgery, since he would have to go in externally and according to him much more complicated. This is opposite of many of the experts in the US. I know dr. Máiz has done more than 30 surgeries (both intraoral and external), so he has a lot of experience. He is very knowledgable and shows great empathy. He took as long as I needed to explain all, and even came in with another doctor on his day off for another opinion. It’ll be interesting to hear what he tells you! I have not given up and still hope for surgery!

I hope you Will find your solution. Did you try injection? There is a fb group. Try it to get more informations about ES.