Hello,
Hope everyone is doing great. I’m still new to the site, and I posted in wrong thread. I will type in here. So I guess I would like to ask, I created 3D images from my ct scan. I was told in Facebook group that my lesser cornu look big. What do you guys think? Styloids measured just short of 3cm. Are there any compressions that anyone notices? Why would my lesser horns be so long? Any input would be great, Thank you! I still have not been officially diagnosed. My symptoms include difficulty swallowing and feeling like there is a bone picking in my jaw, hearing loss and tinnitus in my ear, dizziness…Images are below. 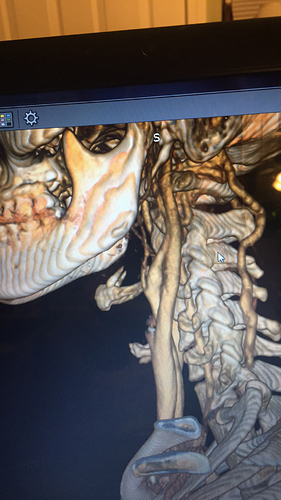 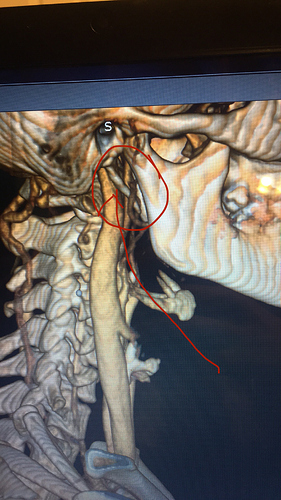 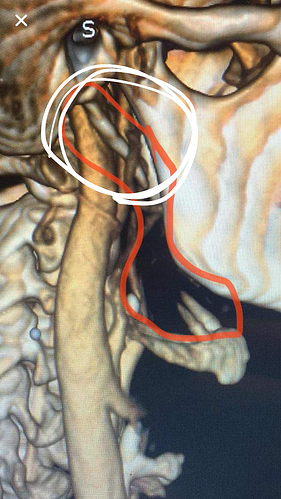 We’re not doctors on here, just been through Eagles ourselves, so can only give you an amateur opinion! To me the styloids look a bit elongated- often the measurements aren’t totally accurate. They’re certainly at quite an angle, & there’s research which shows the angle can cause symptoms as well as length. The left one looks quite jointed & wide in one part. It’s hard to see if there’s any vascular compression, but it’s possible.
Was there any mention of ES in the CT report? Given your symptoms as well, I would think it’s worth seeing someone with ES experience- have you looked at the doctors list?

The lesser cornu do look a bit longer than normal & quite pointy too, not so used to looking at those though!

Thank you Jules Yes, I did look at Doctor’s list. I made an appointment with one and am waiting to be seen, it is going to be awhile, unfortunately. The CT scan was done awhile ago and it was unremarkable, per doctors. I since went to another doctor and he ordered CT scan again…I will probably do it but I wonder if I should ask the Dr. for CT angiogram to see if there is a compression.

Right? From other people’s scans , I can tell mine looks longer than usual

I’m glad you were finally able to get your CT scan converted to 3D pics!

So here’s my opinion: Your styloids look thick & somewhat elongated & I agree w/ the other things Jules said regarding them.

I don’t think the lesser cornus of your hyoid are “big”. What you’re seeing is bilateral stylohyoid ligament calcification, and it looks pretty thick, from the hyoid bone going up toward the styloids. To me it appears that you have the “magic” combo of both elongated styloids & partially calcified ligaments. A new CT would definitely be worthwhile, but make sure it’s assessed by someone who knows you’re looking for ES. Some radiologists seem oblivious to ligament calcification & styloid elongation unless they’re asked to look for it. If you want to look for vascular compression, you’ll need to get a CT w/ contrast, & your head will need to be in the “provocative” position when the scan is done i.e. the position that causes what seems to be vascular symptoms. If you are not symptomatic during the CT scan, it’s likely nothing of significance will be seen as far as vascular constriction.

Thank you for your reply. I would like to have another CT and will make sure I mention Eagle’s syndrome beforehand. I do realize I need angiogram as well—are 2 in a row dangerous?
If they do remove the ligament, does it mean the hyoid bone will become “loose” (no longer attached to styloid)? In that case, do you know how this is going to affect swallowing and other functions ? Thank you!

The hyoid is held in place by muscles as well as ligaments. The stylomandibular ligament is also attached to the hyoid bone & is often unaffected by ES. Even though it gets detached from a styloid that is resected, it’s still attached to the hyoid bone & connected muscles so the hyoid never truly becomes “free floating”. The stylohyoid ligaments play a small role in helping us swallow. Most people don’t notice it’s missing once it’s removed. I do have some post ES swallowing issues, but it has been suggested that’s vagus nerve malfunction not anything to do w/ the missing ligaments. I had that problem prior to ES diagnosis. I have other vagal issues that may or may not be related to ES so that diagnosis makes sense to me.

Isaiah, thank you
I see. What about ligaments attached to lesser horns? (Stylohyoid, is that correct?) If I understand correctly, mine are ossified and thick. I will probably need to have them removed then? Do you know what are these called and if anyone had those removed during surgery?

…I meant to add: my stylohyoid ligaments are thick and ossified at the apexes of lesser horns— can the doctor cut them right there? By the apex of horn rather than by styloid ?