Imaging - What to look for?

So I asked my ENT to have my neck CT examined by my radiologist again [to look for elongated styloids], and she said everything looks normal. It may be, but I’m skeptical at this point because I feel like doctors just want to get rid of me. Since whatever I’m dealing with isn’t easy to diagnose, they dismiss it and say it’s in my head [I listed my symptoms on another forum]. So yea, very frustrated. 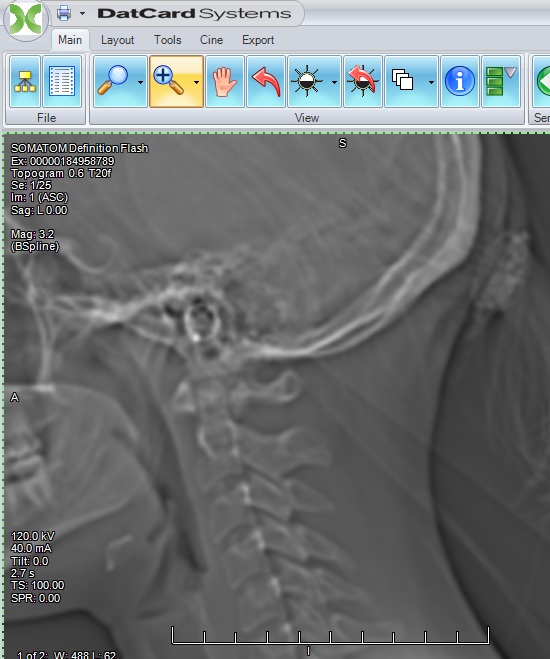 I dont think I can see one.This view surely should be showing the styloid process.I could be wrong though.Could you list what your symptoms are?

I can’t see anything- it’s not very clear, usually anything calcified shows up much clearer than that- even the bones don’t show up very well- sorry… 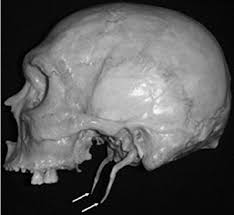 Jules - thanks for the response. The imaging is all pretty bad. My ENT actually showed me this view of the CT and pointed somewhere random by my jaw saying “there’s the styloid, the length is normal.” But I couldn’t see what she was talking about… This is imaging from a CT angiogram, which is meant to focus on blood vessels. It just so happened to capture some bone images as well, so my doctor was reluctant to get a clearer scan.

Thanks Raghav, I know where to look now. The jaw could be covering it. Maybe the styloid isn’t long at all though, who knows. Eagles has so many weird symptoms and is so hard to diagnose. It’s difficult to completely eliminate it as a possible diagnosis.

I myself am yet to take a scan.I wish that what you have is ES or something that is not significant.don’t think me wrong because knowing the root cause gives you much relief than not knowing what is really behind.

Yea knowing what’s causing the symptoms would give me so much relief. This has been going on 6 years now. I avoided it for the first 4, but it eventually became so painful that I had to see a doctor. I was terrified I had throat cancer or something, and thought doctors would find the cause right away. Wish they did. I’ve had at least 10 scans by now, and dozens of blood tests. Everything normal.

Even if the length of the styloid is “normal” (and “normal” is some cutoff the doctors decided was average), it could be protruding at an odd angle, or it could be especially thick; in either case, it might be impinging nerves or blood vessels and causing ES symptoms. This is a possibility to explore with your doctor.

I am not an expert, but the CT scan looks pretty blurry to me. It might not be the right kind to visualize the styloids clearly, since as you said it was an angiogram, designed to highlight blood vessels and not bone. Maybe you can ask for another scan specifically to measure the length of the bones and check for calcified ligaments?

Have you checked the US Doctor’s List to see if there’s a doctor on it near you? It’s under the HOME tab at the top left of this page. Might be worth it to see someone who does ES surgery as you might get a more accurate opinion.

Don’t give up Hollymagnolia. I dealt with it for over 6 yrs too. Recently (June/July) it started hurting me more often then not. In fact all of September and October I was in 24/7 constant pain. Couldn’t even eat anything but soft foods.
My ENT kept acting like I was imagining it too because he didn’t get it, “couldn’t find anything” even suggested taking my tonsils out. No way!! I’m 54 and have never had a problem with my tonsils. They’re staying right where they are thank you! It takes persistence and finding the right doctor. I eventually gave up for a while because my ENT just frustrated me because he couldn’t figure it out. One of his colleagues, in the same office, is who first mentioned ES to me. I had never heard of it before that. But he didn’t think, by looking at my scans, that it was large enough to cause such a problem. Well like callove said, it’s not about the length of the styloid it’s about what it’s doing to the nerves and tendons surrounding it.
Eventually, yrs later, my dentist of all ppl is who referred me to a different ENT. That was a few months ago. I went to new ENT who agreed it was ES. He sent me to a colleague of his at Yale who does this sort of surgery. I went, he confirmed, set me up with a surgery date (Halloween) and I’m now 3 weeks Post Op and doing well. Still healing but the pain is finally gone!! Don’t give in, insist on new imaging for this. Make it clear that you want them to look for ES!! You’re (insurance or you) the one paying them. Make them do what YOU WANT/NEED done! Put your foot down!!
We are here for you! We know what you’re dealing with and are here for moral support any time you need it!

Hi Rearcar1, thank you for sharing your journey and really happy for you that after so many years you finally found relief. I hope you recover more and more each day. Could you please share the name of your surgeon and advise if you had internal or external surgery. Thank you!

Vkossa-My surgeon is Dr. Clarence Sasaki, from Yale-New Haven Hospital in New Haven, CT. He did INTERNAL ES surgery and is a fantastic surgeon. He deals with a lot of throat issues/surgeries. Cancer, sinus, ES,…all of it. I would highly recommend him.

Thank you Jules. I haven’t been on much lately my family has been taking turnes being sick with a head cold.
Hope you’re well